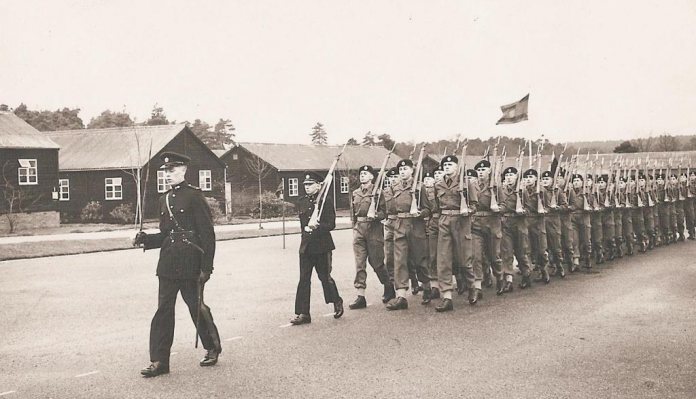 Other celebrities who did their National Service include Sean Connery in the Royal Navy, Michael Parkinson was commissioned and served during the Suez Crisis, while the late comedian Bob Monkhouse served in the RAF. In fact, it is surprising just how many celebrities did National Service, which they saw as doing their duty. Women were exempt, but they could enlist in the armed forces serving in the WRNs, WRAF and WRAC which replaced the ATS in 1949. Knowing how re-enactors like to recreate unusual historical events and periods, I cannot remember seeing National Service among those scenarios. This is strange, because the equipment, uniform and weapons are available to collect and put together a display.

National Service was introduced in May 1947 and required all males between the age of 18 and 21 years to initially serve in one of the armed forces for a period of one year. In 1948 this was increased to 18 months and in 1950 it was increased to two years. The last intake of National Servicemen was in 1960, by which time over 1.1 million men had served in the army and many were sent to places such as Kenya, Cyprus or Suez. Most National Servicemen had never been outside Britain before and after training they could find themselves in the Malayan jungle fighting terrorists or the Korean War, which is what happened to the actor Michael Caine.

Much of the equipment and uniforms were unchanged and the weapons, such as the Bren gun and No 4 Lee-Enfield rifle along with the 3-inch mortar and Vickers machine gun, were the types the fathers of most National Servicemen would have used during WWII. These items are now collected by re-enactors, militaria enthusiasts and vehicle owners, some of whom could well be grandsons of the veterans who used them during their military service. New equipment and vehicles were introduced during the 13 year period of National Service, including the Ferret Scout Car, Centurion tank and Saladin armoured car. Many young soldiers were taught to drive in the Austin Champ and today examples of these and other vehicles are being driven by a third generation who own them privately.

The prospect of being called up was not something which appealed to everybody, but, by and large, it was seen as only being for two years. Griffith Roberts, who served in the Royal Corps of Signals and became a Lance-Corporal, wrote how his service gave him: ‘…self-confidence, taught me comradeship, understanding of my fellow men, discipline and an appreciation of my home and parents. I returned to Caernarvon a very responsible adult.’ Michael Caine and Prince William have both voiced their opinions how it should be reintroduced, but that will never happen. Those men who did their National Service are now well into their 80s and they have become the veterans. It would be the memories of these men which re-enactors would be preserving if a group was to be formed to show people how things were in those days.

With such a timeline to work with and so many military actions to depict, including Palestine, Aden and Suez, it seems a great pity that the period of National Service has not yet been portrayed. It may well be that it has been considered by some re-enactors, but who for some reason or the other have not as yet got round to organising it. There is no shortage of material to use for displays and veterans would be pleased to see they are being remembered. Perhaps the present situation with all events cancelled due to the Covid-19 pandemic, might provide the opportunity for re-enactors to set about doing something to remedy this gap in the timeline of the British Army.

All new groups begin as an idea and as more people become interested and involved so things take shape. Regimental museums across the country, such as The Keep in Dorchester where displays relating to the Devon and Dorset Regiments are exhibited, including National Service, can be used as points of reference. There are many books, such as ‘All Bull: The National Servicemen’ which can provide much information and talking to veterans is essential. There are a few films, such as the 1969 production ‘The Virgin Soldiers’ based on the book of the same title written by Leslie Thomas, who was himself a National Serviceman. A group can turn this research material into a display and with re-enactors in uniform of the period, complete with weapons and equipment it becomes a living museum exhibition.

Most of the hard work can be done using computers, contacting potential members through media sites, compiling research from online sources and contacting event organisers to suggest the idea in preparation for 2021 when the display can be rolled out. Items for display can be obtained online from dealers who are still trading through their websites. Owners with the right vehicles for the period can be contacted through associations such as the MVT or the IMPS and they may welcome the idea to get involved with something different.

The era of the 1950s is a rich, and from what I can see, and as yet untapped period for re-enactors to explore for displays. The culture of the coffee bars, music from British groups and pop stars of the period, including Billy Fury, Marty Wilde, Cliff Richard and Adam Faith, would provide the sound and ‘tribute’ acts could become the entertainment. This is just an idea I had and if it would inspire a re-enactment group to create a National Service display, that would be a result. There is a section of the population who grew up in the in the 1950s and today are of a ‘certain age’. They look back on the period with the same nostalgia as the older generation do for the 1940s and enjoy the music and films for the same reason.

On a closing thought, the 1958 production, Carry on Sergeant, is a film which follows a group of unlikely National Servicemen through their basic training. Although it is a comedy, the film is actually a rather good subject reference source. This helped by the fact that many of the stars either served during the war or completed their National Service. For example, during the war William Hartnell served in the Royal Navy, Bill Owen served in RAOC and Kenneth Connor served in the Middlesex Regiment. Terry Scott and Norman Rossington both completed their national service in the RN and RAF respectively. Some of the scenes showing marching and assault course training were filmed at Stoughton Barracks in Stoughton near Guildford in Surrey. Whilst the training is depicted in a light-hearted way it is not done so at the expense of National Servicemen who did it for real. After all, there is not much to separate an actor from a re-enactor, they both recreate historical scenes.