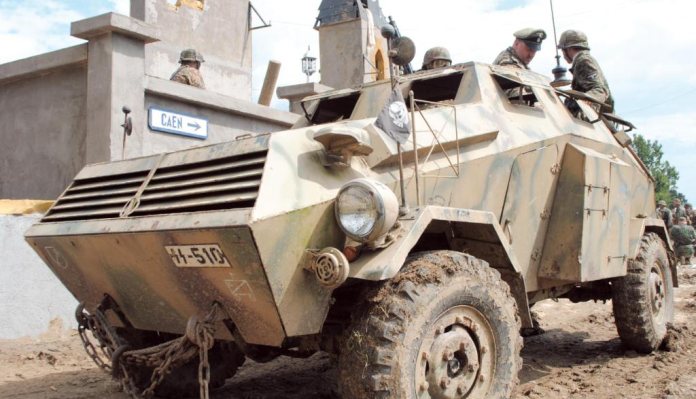 Re-enactment events are always lively affairs, full of movement and usually lots of noise. They also spring unexpected surprises on people. These encounters arouse curiosity, because visitors to events are suddenly confronted by something which they may have only ever previously seen in a book. These are the rarities and curiosities and can range from small items to the very large, such as vehicles.

The look on the faces of re-enactors, when they notice that something in their display has captured the attention of visitors, makes all their hard work worth it. Sometimes, however, it can go the other way and people can walk past things which are unfamiliar to them. Personally, I am always on the lookout for unusual items at events and it is interesting to discover how these items were obtained.

For example, a few years ago I was at the Military Odyssey event at Detling when I saw a Saxon re-enactor wearing an exact replica of the Sutton Hoo mask. Only fragments of the original were discovered during the archaeological dig in 1939 and the version we see is an interpretation of those pieces. To see someone wearing a replica would otherwise have been an oddity, but this was a re-enactment, where anything can happen. It was explained to me that the mask had been made for him in return for a favour. Outside of a museum, to see such workmanship was a rarity and quite stunning.

Sometimes, such moments can be subtle, yet still have an impact. At a recent low-key 1940s-event in Devon I spoke to a lady called Yulia who was displaying Soviet Red Army equipment and weapons. She explained that she came from Moscow and has lived in Britain for over 14-years and enjoys collecting wartime Russian militaria. On her display were some records with Russian Cyrillic script printed on the labels. This was something I had never seen before and out of curiosity I asked what kind of music Russian troops listened to. She explained it was usually dance music, such as foxtrot or tango, but never swing or jazz. Since seeing these records I have searched on the Internet and discovered several sites offering recordings of wartime Soviet music. These are described as ‘rarities’ and Russian-styled re-enactment groups may consider buying some to add to their display.

At events where earlier periods, such as the Roman Empire, are depicted it is interesting to look for various items from weapons to armour. The most usual style of armour, known as lorica which means body armour, is the segmentata-type with the inter-connected bands. However, there were other types, known as hamata or mail and squamata or scale armour, which can be seen in museums. Some Roman groups do have reproduction examples of these and when such rarities are displayed at an event they draw much attention.

Not so Civil War

All re-enactment is popular and the groups work hard to maintain a high standard for displays and enjoy unveiling new items. The period of the English Civil War is perfect for springing such surprises, which increases the level of curiosity. Weapons, especially those which are more unusual, draw attention. During the 16th and 17th centuries gunsmiths began producing a range of large, very heavy musket-type firearms, known as wall or rampart guns. Their size and weight meant that they could not be handheld and had to be rested on a wall, hence the term. Some enterprising soldiers mounted them on wheeled carriages, like a wheel-barrow, which provided mobility.

These heavy weapons were like the .50-inch calibre Barrett sniping weapon of their day and examples are to be seen at battle re-enactments. Sometimes referred to as ‘amusettes’ these weapons are really mini-cannons, being loaded and fired in a similar action but aimed directly using line of eyesight. The recoil was not as great as a cannon but the shock of coming under fire from such a weapon, with its long range, would have been great. After watching these weapons in battle re-enactment, people visit the camps to find out more about these strange weapons. They also become absorbed in discovering more about the whole range of weaponry from the period.

Over the years I have encountered many different depictions with groups recreating cavalry units, infantry and artillery such as the Napoleonic Wars rocket artillery. The period which continues to turn up strange and unusual items is the Second World War. Between 1939 and 1945, weapons designers produced a variety of small arms, including a device known as the ‘krummlauf’, designed to fire around corners. There were also specialist vehicles, such as the bridge-laying tank and ‘bobbin’ to lay a trackway over soft ground. These have been modified and versions are still in service today. At military vehicle shows, we sometimes see examples of those vehicles, such as the duplex-drive Valentine tank, from which was developed the Sherman ‘swimming’ tank, as used on D-Day.

The Germans produced a range of specialist vehicles, some of which were oddities and today are rarities, including the tracked Kettenkrad with motorcycle front wheel and handlebars. The Italians developed a motor tri-cycle, which could be used to transport light loads of equipment or machine guns, such as the Breda M37 that weighed over 40-pounds. Owners of Kettenkrads turn up at events, but the Italian motor tri-cycle is a true rarity and I have only ever seen it once. Some people may be more fortunate than me and could have seen it more often.

All armies, which fought in WWII, had their standard weapons such as rifles, machine guns and sub-machine guns, but new designs were introduced throughout the war.

The German army, for example, took into service a series of innovative designs, some of which influenced post-war design. The type which so obviously springs to mind is the MP 44 which fired ‘Kurz’ or short round 7.92mm calibre ammunition. There were other variants and between them the production run was over 400,000 weapons. Whilst not a rarity, reproduction versions are available, it was this weapon which certainly influenced the design of the AK47 and other modern ‘assault’ rifles.

As we see replica versions of weapons, we are now also seeing full size replicas of some very rare vehicles. There is a good version of a Marmon Herrington armoured car and reproduction German vehicles are realistic in appearance. The examples of StuG III Assault Guns used by groups have been produced by joining two ex-British army FV432 APCs together, which look good. There are lighter vehicles, including the SdKfz 222, SdKfz 223 and SdKfz 247 armoured cars, which have a realistic appearance in a battle re-enactment scenario.

There are many examples of the unusual to be seen when walking around events, it’s a question of keeping an eye open to spot unfamiliar weapons and the strange vehicles. It is like watching a documentary in real-life, with the bonus of being able to ask questions of the owners.

Reading about such things in books provides part of the answer but getting out and tracking down things at events is truly satisfying. To paraphrase a well-known advert; Re-enactment really does satisfy the parts other hobbies can’t reach.