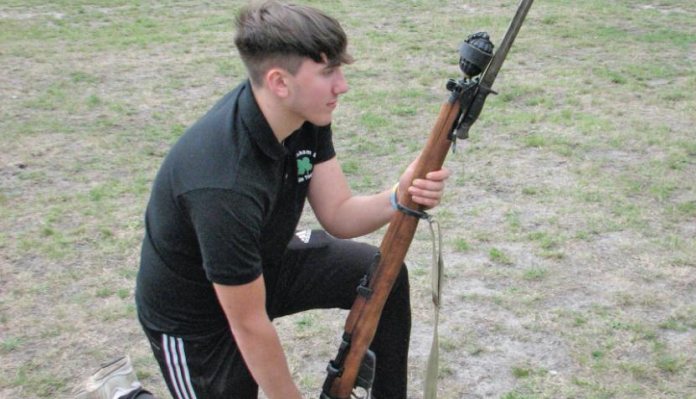 During the First World War, hand grenades functioned in a variety of ways and were produced in all sorts of shapes and sizes. They included improvised types, made by the troops in the trenches, using an empty tin can filled with an explosive compound and packed with bits of metal such as nails to produce an anti-personnel effect. The properly designed types, produced in munitions factories, were reliable but there was always room for improvement. Then, in 1915, the British army began to be issued with a new type of hand grenade which was fitted with safety devices and a fuse which had a known burn time. This was the No 5, designed by William Mills of Sunderland, with its distinctive exterior of an embossed rectangular pattern on the body.

Basic receptacles filled with gunpowder, which could be termed proto-hand grenades, had possibly been made as early as the 15th-century and by the 17th-century armies formed ‘grenadier’ companies with soldiers specially trained in the use of grenades. The Mills bomb, as the No 5 came to be known after its inventor, weighed 1lb 11oz, measured 2.4” in diameter and 3.5” in length. It had a good oval shape and the size meant it fitted into a man’s hand while the weight allowed the average soldier to throw it to a distance of about 50 feet.

This was good for clearing out enemy trenches and throwing at an attacking enemy. Early trench mortars threw bombs out to ranges of 200 to 300 yards, but something was needed to ‘fill’ the gap left between hand grenades and mortar bombs. This appeared in the form of the No 23 grenade designed to be projected from the barrel of a rifle. It was a No 5 Mills bomb modified into a rifle grenade by having a long metal rod screwed into the base which was inserted down the rifle barrel. It was launched by inserting a blank or ballistite cartridge into the rifle chamber and on firing it would produce propellant gases to launch the rifle grenade.

It was based on a design by Martin Hales from 1907, but the clever part was the muzzle attachment which fitted to the front end of the rifle to hold the grenade steady whilst the firer made ready. The device was formed from mild sheet steel as a one-piece stamping to create an outline pattern which was then pressed into shape. The two ends were welded together to produce a circular sleeve which held the grenade. To prepare his weapon for firing the small explosive device, a soldier slipped the launcher attachment over the bayonet fitting point of his Lee-Enfield rifle and then fitted the bayonet, which held the launcher attachment in place.

British soldiers used these in the trenches from around 1915 and to recreate an accurate display re-enactors like to use authentic-looking equipment. Not many of these launchers survived the rifle is still in “safe” mode, but the bolt can be operated, allowing the user to empty the magazine. This central position also allows the bolt to be dismantled when removed from the gun. The vertical face of the cocking piece allowed new recruits to place a piece of leather, or other suitable material, between it and the bolt sleeve so that they could practice dry firing without causing damage. The bolt release catch is on the rear left side of the receiver and is pulled outwards to remove the bolt from the rifle, and when inserting the bolt into an empty magazine, the follower, which acts as a bolt hold-open device after the last round has been fired, needs to be depressed.

The layout is a 2-band arrangement with the rear band having a sling swivel to mate with the one in the stock. The front band has an integral bayonet lug which has a hole drilled laterally and this was sometimes used to pass a cleaning rod through three guns to stack them pyramid fashion in the snow. A bit of research turned up some information on the markings on the disc in the stock. The disc is divided into three sections, the larger of which indicates the bore measurement. Reading left to right on the bottom line from the 6.46 measurement you will see the small triangle above the figure ‘9’. This indicates that the bore was measured at 6.49mm. The smallest section of the ‘pie’ indicates the condition of the bore, and in this case, the mark shows it as condition ‘1’. A new barrel was seen as being perfect, in which case no mark would be made, so this one is less than perfect but still very usable. If the barrel was found to be condition ‘3’ the rifle would be withdrawn from service and the barrel replaced. Of course, there is no telling when in the last hundred years these marks were applied, but a visual inspection of this barrel seems to support the marks.

The North Yorkshire Moors during a gale is probably not the ideal place to try and prove the accuracy capabilities of any rifle, but at least we could test its function, in this case with PPU factory ammunition supplied by Henry Krank. The non-detachable magazine has a five-round capacity and the smooth-as-silk bolt action meant feed was effortless and positive, and empty cases were thrown well clear. The rifle has a rather heavy, two-stage trigger, which is not as good as the Schmidt-Rubin, but something that would require very little work to remedy.

As always with something a bit different, the allocation of ammunition was soon gone. I think I may have to purchase a little more and revisit this rifle on a more suitable day.

For those who like to add a bit of interest to their shooting, there are a number of outlets supplying accessories for these rifles, from bayonets to the blank ammunition attachment. A couple of bits of kit I would probably consider would be the little canvas bag that catches spent brass and the front sight protector, if for no other reason than a bit of range cred.

A final word: If you have an empty slot on your ticket it is always worthwhile checking out the second-hand Guns at your local shop. There are still gems to be found.