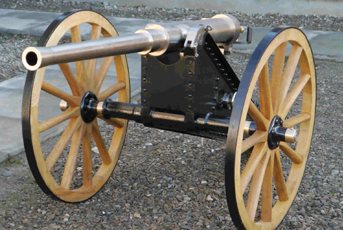 Built to address the growing re-enactment market, the Webley & Scott Field Cannon is a scaled down version of the Classic Quick Firing 12-pounder Field Cannon. The Quick Firing 12-pounder gun was a common 3-inch (76 mm) calibre naval gun brought into British service in 1894 where it remained in active use until at least 1945.  The gun was designed by Armstrong’s Elswick Ordnance Company in 1893. It utilised a state of the art interrupted thread breech and fired a fixed round of ammunition at the rate of 15 shots per minute.  While being a common gun, its place in British Military history was immortalised through use during the Boer War where Naval guns were taken ashore, fitted with makeshift carriages and sent to assist the Army.  The Boer War events were commemorated every year at the Royal Tournament Gun Run until the late 1990’s.

The Webley & Scott Field Cannon barrel is made from forged alloy steel bar and has a 50mm smooth bore which allows it to be held on a UK Shotgun Certificate. The breech uses an interrupted thread system, the same as the original, which locks and unlocks by rotating only 60 degrees. As the breech rotates to unlock, it also automatically cocks the firing mechanism.  Once loaded, the Webley & Scott Field Cannon, proved by The Birmingham Proof House for 2lb of shot driven by 1/4lb of black powder, is fired by lanyard.  The Field Cannon’s carriage is a steel plate fabrication using traditional hot closed steel rivets. The wheels are crafted using English oak and ash and were made by Mike Rowland from Devon, Wheelwright to Queen Elizabeth II.