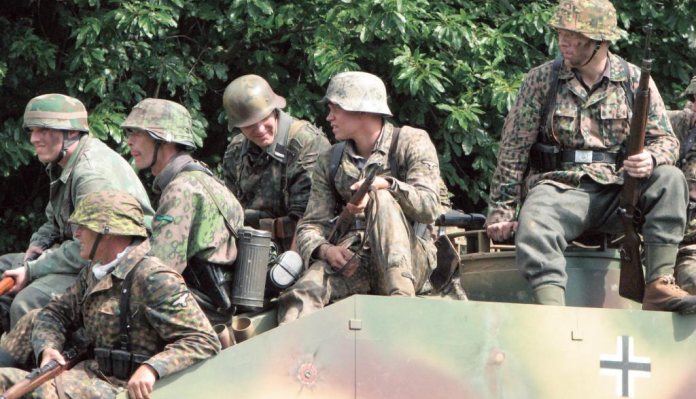 Each period of re-enactment has extra special dates in its calendar, which set certain events apart from the others and groups depicting the period mark this by organising events to commemorate either a battle or campaign. For example, a few years ago, it was the turn of the Napoleonic Wars groups to commemorate the bi-centenary of the Battle of Waterloo. More recently, it was the turn of those groups depicting the First World War, which they marked with a series of events to commemorate the centenary of various battles fought between 1914 and 1918.

This year it is the turn of those groups depicting WWII, as they turn out to remember the 75th anniversary of the D-Day landings on the Normandy coast in France. Unlike earlier periods, which have no veterans left alive, there are men still active to who took part in that momentous event on the 6th of June 1944. Known as ‘Operation Overlord’, it was the largest operation to be planned and involved men and women, both military and civilian alike.

For re-enactment groups depicting WWII, recreating episodes from the Normandy Campaign are a popular choice at events. The General Public, who are the spectators at these shows, will know of the operation through the many books, films and documentaries which have led to it becoming the most famous operation of the entire war. There is even a tourist industry, with visitors travelling to many of the historical sites which have been preserved, many of which have been visited by re-enactors. The veterans visit the beachheads and return to the villages where they fought, being feted in the process and quite rightly so.

On such occasions as this, reenactment serves to bring history to those who cannot or are otherwise unable to visit the sites. In doing so, the reenactment groups, together with vehicle owners, show people how things would have looked and sounded. Films such as Saving Private Ryan and The Longest Day, are excellent productions but on screen they show things in two-dimension. The battle re-enactment is live action drama that unfolds in real time and puts the viewing public on the edge of things. In effect, this is better than ‘virtual reality’, because it is possible experience the noise and smells and watch all the movement. Things really do not get much better than this.

Over the years I have seen many battle reenactment events depicting scenarios from Normandy, ranging from small scale to very large, with lots of tanks and pyrotechnics. Some of the displays are very imaginative and include attacks against replica German defences, such as beach obstacles and even bunkers. Some of these ‘props’ are large enough to accommodate re-enactors with machine guns. During the displays, the opposing groups show how troops would attack, using tactics taught to the men during the war.

Many of the groups are ‘seasoned’ in such re-enactment scenarios and to watch them in action at battle re-enactment displays can sometimes look like wartime film footage. Among the German groups involved in such displays, there are usually Fallschirmjager or parachute troops, along with other infantry groups, to show the range of units that the Germans deployed across Normandy. Some of the participating groups are among the most authenticlooking re-enactments I have encountered. The weapons they deploy include blank firing mortars, machine guns and anti-tank guns, with the crews using the correct firing drills.

Original German wartime vehicles are scarce and so reproduction versions are used and look the part. This includes armoured vehicles, such as the StuG III, SdKfz 222 and SdKfz 223, Panzer III, all with blank firing weapons to provide support. For more mobility, trucks and motorcycles, along with Kubelwagens and Schwimwagens are used for extra drama. Throw in a lot of pyrotechnics and the recipe is right for a perfect Normandy battle re-enactment.

The Allied groups recreating scenarios from D-Day and the Normandy Campaign include airborne forces, artillery with 25-Pounder guns, armoured units with Sherman tanks, Dingo Scout Cars and Daimler Armoured Cars. Naturally, the infantry units are well represented, which many veterans enjoy, because it gives them an opportunity to meet the groups, have a reminisce and the chance to tell some of their stories. In return, the reenactors are thrilled to learn directly from the men who were there in the fields of France 75-years ago. Some of the groups depicted are more famous than others, such as 101st US Airborne Division, best known from Stephen Ambrose’s book ‘Band of Brothers’. These events, though, are organised so that everybody is remembered, from the drivers and cooks to the parachute troops and tank crews.

At the larger battle re-enactment displays, there is usually a lot of movement, as first one side then the other tries to gain the upper hand. Seeing tanks in action with infantry is certainly how the fighting in Normandy would have been as the troops left the beaches to move inland. Just as in the war, so too at battle re-enactment, sometimes the Allies win but on other occasions it is the Germans who win. The event organisers like to arrange things that way, just to keep the visitors guessing.

Even at the smaller events, groups still manage to put on a display of some kind, such as patrols to demonstrate how the troops would have moved. They also put on static exhibitions of equipment, weapons and other items of kit, all of which attracts interest. These are collections and, in effect, are like outside museums. These displays offer veterans another chance to have a chat about their experiences and give an insight into a piece of kit or a weapon.

It is not just the fighting troops on the ground which visitors can see. The wartime leaders are also depicted, such as Omar Bradley, who was aboard the USS Augusta, commanding the American landings at Omaha and Utah beaches. There are several depictions of Field Marshal Montgomery, ‘Monty’, who was in overall command of the 21st Army Group as the Allied ground assault troops, including Canadian, American and British, was known. The best depiction of General George S. Patton junior, who joined the fighting in Normandy in July, almost one month after the actual landings, is that by George Kimmins.

Higher up the chain of command, there are a couple of fine depictions of General Dwight D. Eisenhower, Supreme Allied Commander, as too are there a couple of excellent depictions of Winston Churchill. On the German side of things, there is Field Marshal Erwin Rommel, who commanded Army Group B of the Seventh Army in Normandy. Otherwise, there are only the officers within the re-enactment groups depicting German units.

It is only right and proper that this momentous episode in history be commemorated with displays and reenactment groups are there to support them. There are many being organised around the country, so check out your local newspapers for details. Be sure to check this month’s diary dates, because a few are mentioned. For example, Southwick Revival, where much of the planning for D-Day was discussed. The original operation map can be seen in Southwick House, where visitors will be escorted on guided tours. Brixham town in Devon is planning a series of events for nine days complete with a wartime MTB.

Today, we owe a debt of gratitude to the brave men and women who helped make D-Day the success it was. Leading the way in expressing our thanks are the many re-enactment groups who do a marvellous job in making sure that the deeds of those men and women are not forgotten.