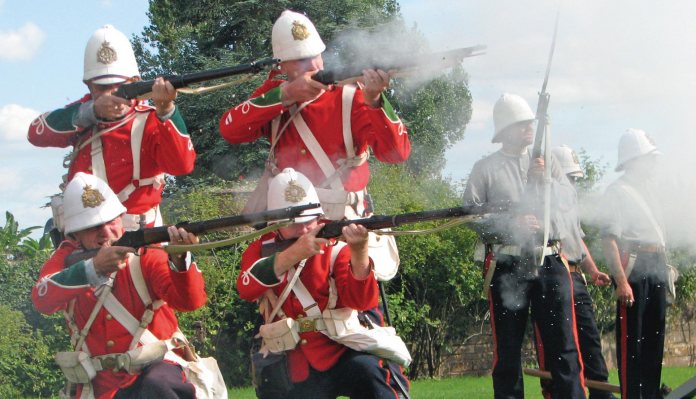 By the 1860s, the .577” calibre Enfield rifle used by the British army was nearing the end of its service life. Taking a lead from other European armies which were introducing new breechloading, bolt action rifles into service, such as the French ‘Chassepot’ Modèle 1866 and the Prussian Zundnadelgewehr ‘Needle Gun’, the British army adopted the Snider-Enfield rifle in 1866. Designed by the American-born Jacob Snider, it fired a rimmed cartridge of .577” calibre and was the first breech-loading rifle of the British army.

Whilst the Snider was a good rifle, being used in many campaigns of the period, it was to be its successor, the Martini-Henry, which would come to define the army of the Victorian period. The Martini-Henry rifle was the result of combining a barrel designed by a Scottish gunsmith, Alexander Henry, and a ‘falling block’ action designed by Friedrich von Martini, a Swiss-born gunsmith, whose idea was an improved design developed by the American gunsmith Henry O. Peabody. The first model was known as the Mk.1 Martini-Henry in .450” calibre and it was issued to British troops for firing trials from 1871, by 1874 was in general use.

The style of the mechanism was hinged high at the rear and operated by a lever, set under the butt-stock and behind the trigger guard, thereby dropping the breechblock to expose the chamber and allow loading. The hammer was contained internally, being cocked to fire when the lever was operated. The construction of the block was such that the recoil was absorbed by the back and sides of the receiver. The cartridge was fired by the striker being driven forward by a strong spring located within the breechblock. The action of the lever as it lowered the front of the block caused it to fall and strike the lower arm of the extractor, thereby ejecting the spent case. A new round was inserted and the lever pushed up to close the action, which chambered the round and compressed the mainspring.

The Martini-Henry rifle was used in all major campaigns in which the British army saw action, such as the Anglo-Zulu War of 1879 where its use by the small garrison in the defence of Rorke’s Drift earned it a place in history. Between 22nd and 23rd January 1879, 140 men commanded by Lt. Bromhead of the 24th Foot and Lt. Chard of the Royal Engineers, fought off repeated attacks by the Zulus. They fired an estimated 20,000 rounds of ammunition, killing around 400 Zulus at a cost to themselves of 25 killed and wounded. The reputation of the Martini-Henry was assured and led to the development of further Marks of the rifle.

The MkII appeared in 1876 with no safety catch and a steel split-spring axis pin. This was followed three years later by the MkIII, fitted with two metal bands to secure the barrel to the wooden forend, but otherwise remained unaltered. Finally, there was the MkIV, which had a longer operating lever but apart from this was otherwise unaltered.

A carbine version was also developed, with the barrel length reduced from 33” downs to 21”, for the cavalry who could better manage the shortened version whilst mounted in the saddle. These versions with their changes make the rifle of great interest to weapon collectors who are able to create a display showing the development of the weapon.

Collectors interested in ammunition and weapon ballistics naturally find the weapon a fascinating subject, also. The barrel of the Martini-Henry rifle was chambered to take a ‘bottlenecked’ cartridge which had the .577” calibre at the base, the same as Snider-Enfield rifle, but with a bullet head of .450” calibre weighing 31.056-grams. The original cartridge cases were rimmed and made from rolled or coiled brass. As manufacturing methods improved, a complete drawn brass case was developed, which retained the rimmed base of the cartridge case making for easier extraction. The cartridge case contained 85- grains of black powder and the complete round, with its paper patched head, weighed 480-grains. When fired, the cartridge would typically produce a muzzle velocity of some 1350 FPS. Packing of the ammunition and examples of the shorter carbine rounds and both coiled and drawn brass cases are of interest to collectors.

During its service life, the Martini- Henry rifle was equipped with several different types of bayonet, and for that reason, collectors of bladed weapons also find the history of the rifle of interest. The first design of bayonet fitted for the Martini-Henry was a modified type originally developed for the Snider, it had a blade length of 17”. In 1875, the Royal Artillery began to receive the Martini-Henry rifle with a bayonet that had a blade measuring 18”, of which 8” on the back edge was ground to produce a cross-cut saw pattern. Then, in 1876, a bayonet with a triangularsection blade measuring 21.5”, called ‘the lunger’ by the troops. This was followed in 1879 by an even-longer design with a blade measuring 25.75”. Further patterns followed, including an attempt to modify the 1856 Pioneer sword-type bayonet as late as 1895.

Beyond its interest to collectors, modern versions of the weapon have been produced to allow shooters to experience the Martini-Henry action when firing other calibres (.22, .303 and 7.62mm). Original versions are available, ranging in price according to condition and the Mark. Reenactment groups who depict the British Army of the Victorian period use the Martini-Henry in their displays, with the best such presentations being produced by the Diehards and the 1879 Group.

The Diehards are a highly respected and experienced group that depicts the 57th Regiment of Foot (later to become the Middlesex Regiment), they have been involved with many film productions including documentaries. Their arena re-enactment displays at shows attract large numbers of viewing public with thrilling demonstrations of musketry using their Martini-Henry rifles. The firing and loading in line abreast show how deadly such firepower could be, and with bayonets fitted the effect is complete.

The group use exact drill movements taken from manuals of the day to present the most accurate depiction, which includes forming squares edged with fixed bayonets to defend against cavalry charges. Marching in formation with rifles is very smart and the displays of bayonets in use are all authentic because the manuals have been used to recreate the actions. Today, these re-enactment displays are the closest most people will ever get to see the real thing being used in live-action.

The Martini-Henry rifle is a historical artefact, seen in regimental museum displays across the country. Used by many armies and in so many campaigns, it has become a true all-round weapon of interest to so many enthusiasts, from collectors to re-enactors. It is a piece of history that can easily be included with a small display. There are interest groups for enthusiasts, such as the Martini-Henry Society, formed over 40 years ago for the exchange of information on all aspects of the weapon. The society has a website (www.martinihenry.org). This includes a forum where questions and answers can be posted as well as the general history of the weapon and informative videos covering ammunition, to present everything you could want to know about one of the most important weapons of all time.