Two for the price of One 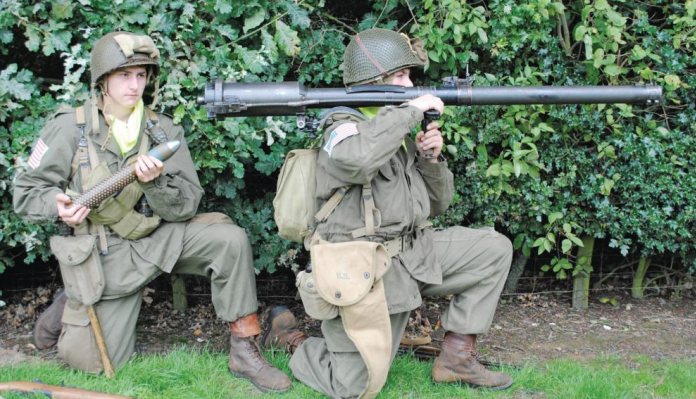 I have always affirmed that re-enactors, whatever period, have the ability to continually deliver surprises which not only keeps the pastime fresh but also keeps the public interested and wanting to visit shows. Some time ago, I attended an event where I saw two surprises which showed exactly how militaria collecting and re-enactment can be complimentarily combined to produce a display. The first surprise was seeing an M18 recoilless rifle (RCL) being demonstrated as part of a display. Then I realised the re-enactors showing it were depicting the US 17th Airborne Division, which was the second surprise. Now, here I was seeing two unusual things together about which I knew from only ever having read in books.

The most recognisable airborne divisions of WWII are without a doubt the American 82nd and 101st. However, outside of military enthusiasts and re-enactors, it is not widely known that three other American airborne divisions were raised during the war. Unfortunately, they have become overshadowed by the histories of the more famous aforementioned division’s, which were involved in actions such as D-Day and Operation Market Garden. As a result, the others, the 11th, 13th and 17th have become largely forgotten. All three divisions were raised in 1943, underwent the same training as the 82nd and 101st plus were issued with the same kit. The 11th served exclusively in the Pacific theatre of operations and the 13th was never operationally deployed in a combat role. The 17th took part in its first action in the European theatre in December 1944.

Once raised, the 17th Airborne Division participated in extensive training exercises before being sent overseas to arrive in England after D-Day. The unit badge displayed an outstretched eagle’s talon in yellow, set against a circular black background, leading to its nickname of the ‘Golden Talons’. Despite its motto of ‘Thunder from Heaven’ it was frustratingly not until after Operation Market Garden that the 17th Division was deployed to Europe. Even then, it would not be committed to proper battle until the ‘Battle of the Bulge’ in December 1944.

Joining its sister divisions, the 82nd and 101st it formed part of the XVIII Airborne Corps and was soon making up for lost time. It found itself engaged in some of the fiercest fighting around Bastogne at locations such as ‘Dead Man’s Ridge’. It was during this phase that Staff Sergeant Isadore Jachman of the 513th PIR won the division’s first Medal of Honor. It next took part in Operation Varsity, the parachute drop to cross the Rhine River on the 24th March 1945. More fighting followed and Technical Sergeant Clinton Hedrick was posthumously awarded the Medal of Honor for his actions during the fighting around Lembeck near Wesel. By the end of the war, the division has sustained 6,745 casualties, winning four Medal of Honor, and numerous other awards, including 179 Silver Stars. Finally, on the 19th June 1949, the 17th Airborne Division was disbanded.

The unit had a history lasting six years, the re-enactment group had done their research and collected badges and insignia together to recreate one of the lesser-known units of WWII and preserve its history. They had also collected the uniform, helmets, weapons and other equipment to show how the men of the 17th looked. One of the weapons they had obtained was the M18 RCL, which in itself is most unusual and has an interesting history surrounding its development.

During the war, all armies produced anti-tank weapons to provide their infantry with the capability of destroying armoured vehicles. The Americans first developed the M1 2.36” rocket launcher or ‘Bazooka’, followed up with the M9 in 1943. In that same year, the American Artillery Section of the Research & Development Service unveiled its idea for a new anti-tank weapon known as the 57mm calibre M18 Recoilless Rifle. Live firing trials were successful and an order for 1,000 weapons was placed. Unfortunately, there was no factory space available even for such a small production run, so the order was sub-contracted to the Dominion Works in Quebec, Canada. The first consignment of weapons and ammunition reached the European theatre of operations just before the end of hostilities, with some being used in limited combat roles in Italy during April 1945.

One of the first units to receive the new weapon was the 17th Airborne Division, with the weapons being issued to men taking part in Operation Varsity. Elements of the division became engaged in fighting to capture the strategic town of Wesel along with Essen and Munster. It was here the weapons were used for the first time in combat, in Germany. That is how the pairing came to be made between the reenactment group depicting the 17th Airborne and their use of the weapon in the display. The connection was perfect and proven to be historically accurate. As more M18s became available they were sent to the Pacific theatre of operations where they proved useful against well-entrenched positions and what few tanks the Japanese still had.

The M18 remained in service after the war and would be used by overseas armies including France, Brazil, Italy, Greece and Turkey. The US Army used it during both the Korean War and the Vietnam War, while France also used it during the Indo-China War (Vietnam) in the 1950s. It would also influence other countries to develop similar weapons, including Russia and China. In the 1970s Italy also developed a similar weapon, down to the ammunition, called the Folgore.

From a weapon enthusiast’s point of view the M18 RCL is very interesting, and to obtain an example would be a great addition to any collection. Operated by two men it could be fired from the shoulder, but it weighed slightly over 44 lbs and was just over 5ft long, which meant it was best fired from a tripod mounting for better accuracy. When fired in this role the whole thing weighed over 90 lbs, but its effectiveness against armoured vehicles and other targets, such as machinegun positions, made it a useful support weapon for the infantry. When fired from the tripod mount the M18 could traverse through a full 360° to give all-round fire. The barrel could be elevated between -28° and +65°, allowing it to fire uphill or downhill from defensive positions.

Collectors specialising in ammunition may be interested in adding a couple of shells fired by this weapon to their collection because of their unusual nature. The 57mm calibre projectiles for the M18 were of the ‘fixed’ type and included high explosive (HE) as well as special anti-tank projectiles called HEAT rounds. The HE and HEAT rounds weighed 2.75 lbs and 2.69 lbs respectively.

Accuracy and effectiveness were good out to ranges of around 500 yards. The shells had a maximum range of 4,300 yards, but at that distance, accuracy fell off very markedly. The term recoilless identifies the weapon as being without the ‘kick’ or recoil normally associated with a conventional weapon on being fired. The method releases the propellant gases produced on firing the main charge, by directing them through a vent opening, known as a venturi, at the rear of the barrel.

The shell cases of the ammunition were perforated making them unusual and distinctive at the same time. The perforations allowed the propelling gases to enter the annular space around the chamber from where they vented through the venturi. This method of operation replaced the recoil with a powerful jet of the hot gases creating an effect termed ‘back blast’. This could seriously burn or even kill someone unfortunate enough to be caught behind the weapon when it was fired. It also meant that the weapon could not be fired from within confined spaces.

The HE round was useful against buildings and other emplacements while the HEAT round could penetrate up to 3” of armour. Other types of ammunition were developed, including a white phosphorous round for smoke and a canister for anti-personnel use at close range.

Inert examples of the ammunition and legally deactivated examples of the weapon can be found on specialist sites on the Internet and used to create Korean War displays or expand on Vietnam War ones. The idea of combining two such unusual aspects in a display was better than a museum, and another demonstration of what re-enactors can achieve with their collections.