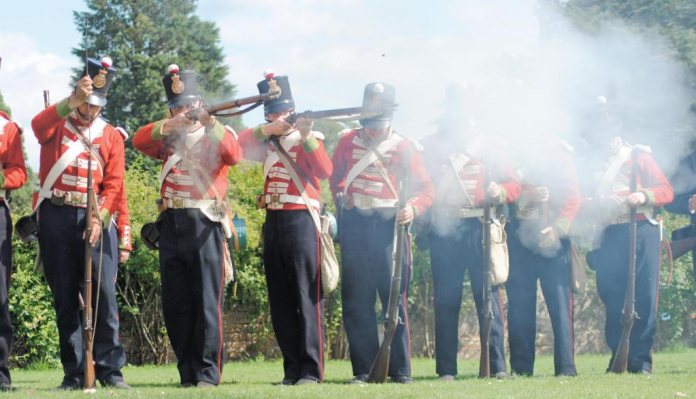 When the young Princess Victoria was proclaimed Queen of England at the tender age of only 18 years old in 1837, nobody could have predicted her reign would last 64 years or even guess at how many events would unfold during her monarchy. In the first year of her reign, the strength of the British army stood at around 129,000 and a rebellion had erupted in Toronto, Canada. After that, every year throughout her reign the army would be engaged in a campaign, fight a battle or war and by 1901 it had expanded to 430,000 all ranks.

The period also saw the introduction of new weapons, uniforms and equipment and new regiments were raised. Today this period is of great interest to re-enactors and historians, with militaria fairs providing collectors with plenty of opportunities to obtain items from this exciting time. The vast array of documents and medals marks out the 19th century as a fascinating time for the study of the British army. It was also the time when the army stopped wearing scarlet tunics in battle and moved to the khaki uniform which would see it through both world wars. It is a period which has become popular with visitors to re-enactment events where they can discover what it was like in the Victorian army.

There is no shortage of locations where Victorian army reenactment events can be held, as well as some of the fortifications known as the ‘Palmerstone Forts’, including Fort Nelson at Portsdown Hill Road, near Fareham in Hampshire and Nothe Fort, near Weymouth in Dorset. Other period settings such as Osborne House on the Isle of Wight, in the charge of English Heritage, and Tyntesfield near Wraxall in Somerset, in the care of the National Trust, have both hosted Victorian army events. Settings like these, including Audley End House at Saffron Waldon in Essex, are authentic to the period, complete the realism and increase the overall effect for visitor interest.

Venues like these allow re-enactment groups to present displays which reflect the closest thing to what daily life was like for the Victorian soldier. Members of the groups can be positioned in barrack rooms to show sleeping arrangements, eating in the mess halls and other routines, including drill and weapon training in the outside areas. It has been possible to recreate these presentations faithfully because photography recorded the imagery of the period in real-time.

The reign of Queen Victoria was the time of the British Empire and the army deployed soldiers to countries such as Canada, India, New Zealand, Australia and South Africa, to protect overseas interests. Now, more than 120-years later, these soldiers have been replaced by Victorian re-enactment groups to show the history of places such as Fort Henry and the settlement at Penetanguishene, both in Canada. In Australia, there is a following of the Victorian era with groups such as ‘The Adelaide Regiment 1862’, which was part of the ‘South Australian Volunteer Military Force’, and ‘The Colonial Re-enactment Society Inc.’, both of which depict the period to high standards.

Here in Britain, there is a strong interest in the period of the Victorian army with displays being presented by several reenactment groups, such as the Portsdown Artillery Volunteers which depicts the 2nd Hampshire Volunteer Artillery circa the 1880s. As the name suggests, this group specialises in artillery displays and can often be seen in action at Fort Nelson where they fire the guns using authentic drills of the period.

The ’Die Hards’ and the ‘1879 Group’ respectively depict the 57th and 24th Regiments of Foot, to show the infantry which would become the Middlesex Regiment and the South Wales Borderers.

With a time span of over 60 years, there is ample scope to allow for various events to be recreated and wars to be demonstrated, including the Crimean War, famous for the Charge of the Light Brigade and the ‘Thin Red Line’. It was also a period when weapons changed from the muzzle-loading, flintlock design to muzzleloading, Pattern 1839 muskets.

These were fired using the percussion cap as developed from a method devised by the Reverend Alexander John Forsyth. This led on to other, more improved weapons being introduced, such as the Pattern 1842 musket, to be followed by the Brunswick rifle which proved to be a failure.

Innovations in small arms weaponry make the Victorian period particularly interesting to weapon collectors, who can form a display with such designs as the ‘Jacob Rifle’, Minié Rifle and ‘Rifle Musket’ both of 1851 and the 1853 Enfield rifle. It is fascinating to see a display of firepower from the weapons used in the period, using examples from collections put together by members of the groups. This includes bayonet drills using the single-shot Martini-Henry rifle, familiar from such films as the 1964 classic ‘Zulu’ starring Michael Caine, based on events at the defence of Rorke’s Drift in 1879.

Within ten years this had been replaced with the .303 calibre magazine-fed Lee-Metford rifle, using Cordite propellant to give increased range and velocity. At the Battle of Omdurman on 2nd September 1898 the Grenadier Guards opened fire at a range of 2,000 yards against advancing Dervish tribesmen. They stopped the attack 500 yards from their positions and the reputation of the British soldiers’ steadfastness and musketry was formed. With such a history no wonder, then, that collectors want to own examples of such weapons along with the bayonets, swords and pistols.

Practical cameras made their appearance during the Victorian period and these were used to record events in photographs. These images have been valuable in providing details to help recreate the period accurately and they are also much sought after by collectors. In fact, the Crimean War was the first conflict to be recorded using photographs by the likes of Roger Fenton, whose works are used as research material.

Arena displays sometimes include demonstrations of signalling forms to show how communications on the battlefield moved away from heliograph to telegraphy and increased the distance over which messages could be passed. Where events are organised at Victorian army barracks, such as Fort Nelson, sentries can be posted at points to give visitors the full flavour of the period as they move around the site. Entering buildings and rooms they encounter soldiers engaged in daily routine or passing the time in some form of amusement such as playing cards. These indoor encounters all add up to making a full experience.

The Victorian period is unusual in being sufficiently distant to be history and yet still be close enough for people to make a connection with it through the portrayal by reenactment groups and enjoy the experience. It is a period which does have something for everyone, from events for visitors to enjoy, collectors to indulge in their interest, enthusiasts of military history to appreciate the architecture, and, of course, the re-enactors themselves.

With the present situation forced on us by the effects of COVID, we all have more time available to us which can be spent researching the different aspects of the Victorian army from the campaigns, to collecting and even inquiring about the possibility of joining the ranks of a re-enactment group. The groups can be contacted through their Facebook pages, including those in other countries. There are numerous websites with information about the period and even though events are not being held, the locations of the Palmerstone Forts where they are hosted can be visited. You may even be interested in learning more about the defences from the period through the Website at www. palmerstonefortssociety.org.uk

Collectors can still purchase items from dealers, many of whom have expanded their ‘online’ range and offer very good service. Again, a search on the Internet brings up many surprises and on a personal note, I have recently bought some very good pieces this way. If you are serious about joining a Victorian army re-enactment group, now might be the chance to get ready and buy your equipment and uniform. There are plenty of suppliers trading online, such as www.thehistorybunker.co.uk, which is based in Leeds and there are plenty of others still trading with mail order service. The groups will give advice and you will be assured of a warm welcome when events resume at the venues, which will hopefully not be too far off.