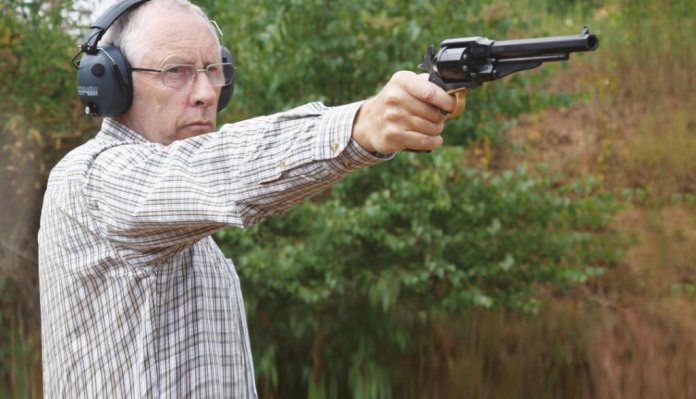 The ban on centrefire revolvers had a negative impact on Cowboy Action Shooting (CAS). The logical move was to go to muzzle-loading (ML) revolvers running on black powder or substitutes, but they proved unpopular due to a perception of their lack of reliability and general hassle. However, there was a solution, as guns were later adapted for smokeless powders. So, reducing the mess and allowing extended shooting without cleaning, and doing away with that extra certificate to ‘acquire and keep’ explosives.

The donor guns for Anvil conversions are in 44 calibre, offered with 5½” or 8” barrels, full blue (apart from the case coloured hammer) steel parts and walnut grips with Uberti’s usual red/brown gloss finish. The trigger guard is brass. Sights are basic, but surprisingly good, the rear is a channel cut into the top strap, culminating in a V-notch, the front is a post dovetailed into the top flat of the barrel. I found fit of parts is very good on Uberti products, with nice edges and good deep black finish.

So, what does the conversion consist of? The original cylinder is discarded and replaced by a new and stronger version to deal with the extra pressure. There are no nipples for percussion caps; instead, there’re are six chambers drilled through to accept a standard shotgun primer at the rear. There is a slight recess at the rear of each, so that the primers are seated flush with the face. From the front, the chamber is rebated, with the outer section that takes a .454” ball reducing in diameter to accommodate the smaller charge of smokeless powder. A separate, nonrotating recoil shield with integrated loading gate sits on the rear of the new cylinder. Ignition is by a centrefire-type, floating pin, located in the shield and actuated by the standard Uberti hammer.

19th century conversions, which used metallic cartridges, were fitted with a spring-loaded ejector rod and tube on the right side of the barrel, used to remove spent cases from the cylinder. The Anvil also uses an ‘ejector rod’ and tube; however, in this case, it’s removeable and can be used to push the spent shotgun primers from the cylinder, as they can be a little awkward to remove with your fingers. It’s placed on the left side of the barrel, so as not to interfere with the loading operation.

This conversion is extremely well made and does not look out of place at all. The positioning of the tube means that one ‘wing’ of the cylinder arbour needs to be removed. On my 5½” model both have been taken off and the right side replaced with a short screw. The first time I handled one of these guns, I was impressed with the quality of workmanship on all of the new parts. The polishing and bluing was certainly equal to the gun’s original factory finish and the edges and fit are first class.

Unlike some other models in this category, the Anvil does not require the user to remove the cylinder for loading, or to use a special piece of equipment for the task, but instead utilises the pistol’s loading lever just like any standard revolver. Handy, is a Delrin extension handle that fits over the end of the loading lever and improves leverage, which is especially helpful on the shorter barrelled version.

How you dispense powder may depend on your gun club’s rules and whether or not they allow the use of flasks. The best way to charge the powder is Anvil’s dedicated flask (reviewed in SS 2018 October). Suffice to say, it’s extremely safe to use and accurate with a variety of powders. A chart on the Anvil website shows the charges thrown by the three versions of the tool. My revolver has been proofed for a maximum of 5-grains of Herco powder behind a 143-grain lead ball and the measure supplied with the pistol is calibrated to throw 4.3 grains of Herco.

Testing showed an average of ten charges to be accurate to within +0.14 grains; impressive! As we are using smokeless powder, there is no need for wads or grease, Anvil recommend that the .454” balls are lubricated with Lee liquid Alox. The removal of the cylinder is a bit fiddlier than a normal percussion model, until you get used to it; so; when loading the balls, be sure that they are fully seated below the face of the cylinder. Should you inadvertently leave one proud, that cylinder will not rotate and also cannot be removed. You will then have to try and tap the protruding ball into the chamber with a hammer and rod with the possibility of damaging the finish of the gun. Been there!

Percussion caps can be fiddly to seat without a good capping tool. The much larger shotgun primers make this job a doddle. Put the gun on to half cock, open the loading gate and just pop them in, almost loading a cartridge gun!

While I feel that the primary market will be CAS shooters, they will also come into their own if you shoot at an indoor range that does not allow the use of black powder. For those shooting competitions, you will more than likely only be allowed to load five chambers, but for a little casual plinking I have always load six. The powder charge thrown by my ‘flask’ proves to be just about right and I would liken the recoil of the 5½” model to be similar to a .38 Special revolver. CAS shooters should have no difficulty hitting their short-range targets with this load (4.3 grains Herco) but more serious target shooters may be able to refine theirs for more accuracy using the chart.

Cleaning is a doddle too, with none of the mandatory immediacy of a BP gun. To remove the cylinder, put the revolver on to half-cock, drop the loading lever and withdraw the cylinder arbour, and open the loading gate. You then need to line up the firing pin with an empty primer recess and, using something like a matchstick, depress it as you withdraw the unit from the right side of the frame. Take care as that spring-loaded pin exits the frame.

Replacing the cylinder is the reverse of the above, with the firing pin being depressed as it enters the frame. You may find a little resistance as the recoil shield meets the hand (cylinder rotating lever) which is protruding into the cylinder recess in the frame. Simply push it in with a finger nail to overcome this. I realise that this procedure may sound a little complex but after a couple of times it comes together easily. There are comprehensive instructions on the Anvil website and also videos on YouTube to help you out.

I have owned my Anvil conversion for almost five years now and it has performed well on every occasion. There was a time when I would only buy these old-style guns that were faithful reproductions of their 19th century counterparts, but I guess that as you get older you mellow some or maybe just get wiser and now, I would not swap this pistol for a conventional muzzle loader.

As this is written (late Oct. 2018) Anvil has announced production of a stainless version of their revolver known as the Renegade. This will be available with 5½” or 8” barrel and fluted cylinder along with models with target sights. Gone is the floating firing pin to be replaced by one on the hammer and the cylinder and separate breech plate revolve together, making removal much easier. For the first time, Anvil is now offering to fit the Renegade-style cylinder to customers’ guns. Guns can be bought complete or sent in and converted.