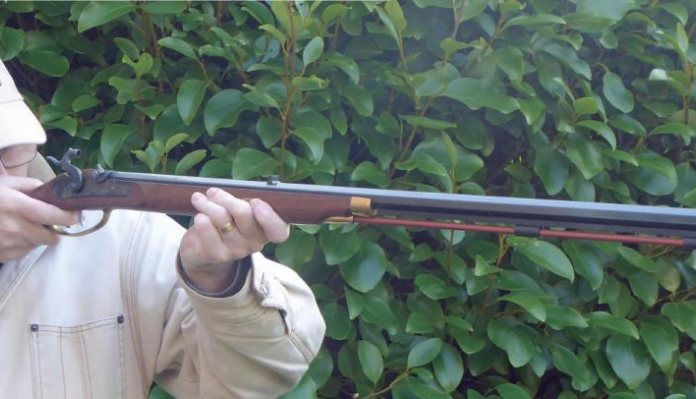 Like most men of my generation, those born just before, during or just after the Second World War, I grew up with a diet of Western movies and TV shows where heroes and villains alike carried Colt revolvers and Winchester rifles that never ran out of ammunition. There were also American icons like Davy Crockett and Daniel Boone whose exploits were often just as exciting, but their long, single-shot rifles left a lot to be desired compared to the later repeaters. Sadly, the Western movie genre has long been out of favour with modern audiences, but wannabee cowboys can today reminisce while shooting reproductions of the guns that filled the silver screen, albeit without the limitless cartridge capacity of the movie guns. Among the aficionadas of Westerns, the Crockett and Boone fans are well catered for by the reproduction firearms industry in the form of flintlock and percussion long arms, with a good selection of models in a variety of calibres. The Ardesa version we have here, with a bore of .32-inches, is the smallest calibre available to modern shooters.

Show someone a photograph of one of these long guns, be it flintlock or percussion, and it will generally be regarded as an example of a ‘Kentucky’ rifle. The origins of the term are a little obscure but the most accepted theory for the origin stems from a popular ballad of the early 19th Century. During the War of 1812 an inferior number of Americans routed the British Army at the Battle of New Orleans (1815). Included in the 5000-strong American force was around 2000 frontiersmen from the Ohio River Valley area, including a number from Kentucky. The exploits of these men were immortalised in the song The Hunters of Kentucky or The Battle of New Orleans, with the writer using a little poetic licence in crediting all of them to be Kentucky men, as exemplified in the following verse:

“But Jackson he was wide awake, and wasn’t scar’d at trifles. for well he knew what aim we take, with our Kentucky rifles”

The song remained popular for many years and as is often the case in such circumstances, the passage of time saw all full stocked, long barrel American rifles became known as Kentucky rifles. The irony of this is that these rifles were manufactured in many states with examples from the state of Kentucky being almost unheard of!

There was doubtless a variety of models and calibres employed by the Americans in that battle and for sure there would have been examples of these lesser calibre rifles used for hunting the abundance of small game on the North American continent.

Today’s muzzle loading rifles enthusiasts will be well aware of the variety of models available as reproductions from the various European manufacturers. As a general rule – there are exceptions - you will get what you pay for as regards quality, both cosmetically and mechanically. The Spanish company of Ardesa are accepted as the budget end of the market but this by no means that you are getting a cheap product. Inexpensive, yes, but they more often than not provide you with a lot of bang for your buck. Their guns are now marketed under the Traditions banner and they have quite a following in the United States.

Cosmetically at least there can be few complaints on the value of the piece we have here. It is a plain, no frills rifle of the type that would have been very popular among the 19th century frontiersmen, with the only hint of any embellishment being a small oval brass plate set into the top of the stock at the wrist. The stock is a nice light-coloured piece of beech with a matte finish and shows some decent grain for a gun in this price range. The sharply curved polished brass butt plate is complemented by another strip of brass running forwards along the lower edge of the stock. The wood to metal fit of both pieces is very good. Many rifles in this category have a fancy brass patch box on the right side of the stock but this one does not look any less attractive without such a fitting. There is more brass to be found in the trigger guard, stock end cap and the rear ramrod pipe, as well as small parts such as the escutcheons around the wedge, around the screw holes on the left of the stock and the front sight blade. Attention to detail in the trigger guard is where the rifle shows its ‘budget’ label, with areas that have not been fully polished, but the operation of the gun is not compromised. On the contrary, that curved ‘tail’ on the trigger guard makes for a comfortable grip.

The barrel is a high gloss black with soft rather than sharp edges to the flats and a nicely crowned muzzle and the 8-groove rifling is a very slow one twist in 48-inches. The absence of any visible proof marks would seem to indicate that they are located on the lower portion of the barrel under the woodwork. The front sight is a brass blade sitting in a steel base which is dovetailed into the top barrel flat and can be drifted left or right. At the rear is a one-piece steel blade and block, again moveable laterally, with a ‘U’ cut-out. A very basic set-up but in keeping with guns of the period and it does a pretty good job. The barrel is retained in the stock by a wedge in the forearm and a screw in the short top tang. Screwed on to the bottom barrel flat is a bar which holds the two front ramrod pipes.

The ramrod itself is an aluminium affair with a female threaded portion at each end and includes a brass end to ram home the ball. It is held very firmly in place when not in use. There is little or no grip on this shiny rod when fouling means that seating the ball needs a bit more pressure, and the enterprising owner may wish to fashion a handle of some sort for such occasions.

The lock-work, with its case coloured plate and hammer – the latter with a small amount of decoration – is held in place by the obligatory two screws passing through brass escutcheons from the left side of the stock. The colours are not too bad, but the plate has a very dull finish. The two triggers are left in the white.

There can be few more relaxing and enjoyable experiences in this sport than shooting a muzzle loading rifle on a warm summer’s day. That pleasure is dimmed slightly with a cool stiff breeze blowing across the range and keeping the flags horizontal. I had been wanting to try one of these small calibre “squirrel guns” for some time but any head shots on squirrel-sized targets was going to be a matter of luck in these conditions.

A quick look on the internet brought up all manner of suggestions for a powder charge with loads from 15- to 70-grains being put forward, and one suggestion that the powder weight should match the calibre of the gun, i.e. .32-inch calibre uses 32-grains. It seemed that most users settled on twenty to 25-grains, so I started at the lower end with 20-grains of Henry Krank medium black powder behind a .307-inch round lead ball wrapped in a .005-inch lubricated patch. For ignition I used Remington No.11 percussion caps.

Starting at 25-yards I found the sight picture very good for such a basic set-up, but that light 45-grain ball was being blown about in the wind. After three shots I upped the powder charge to 25-grains and there was a slight improvement, so I took it up in five grain increments after each three shots but above thirty grains I could not see any benefit, so I settled on that for the rest of the morning. Maybe that ‘weight equals bore’ rule is not too far off the mark. At 25-yards from a bench the best I could do with three shots was a tad over two-inches – not too bad in the conditions. Going out to 50-yards more than doubled the size of the groups.

The set trigger worked well with a fairly light pull and it was crisp with no creep. This is not a particularly heavy gun, but recoil was extremely mild with that load. I quickly found that after only three shots the ball became difficult to ram home, requiring the barrel to be wiped. I feel that in this small calibre the cleaner burning, but more expensive, Swiss black powder would be preferable. As mentioned above, the rod supplied with the gun gave no grip when the going got tough, so I used my own brass rod with a wooden handle.

The gun worked faultlessly for almost 100 shots and despite the weather I had a fun time with the Crockett rifle, which is what it is all about in my book. It would probably be a good starter gun for youngsters or l ady shooters. If possible, I will give this calibre another outing in the summer and try to get hold of the slightly larger .314-inch round lead ball, which was not available on this occasion. Not saying I will perform any Davy Crockett feats, but everything is better with the sun on your back.