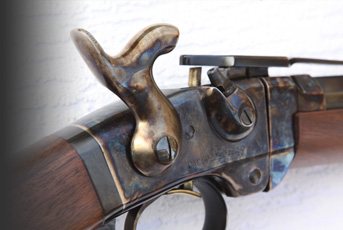 Although the UK’s draconian and pointless handgun ban robbed those same fans of many pistols from the era, the two principal Italian manufacturers of these guns, Uberti and Pietta, still turn out a good selection of percussion revolvers and cartridge rifles between them. Over the years Uberti have stuck closely to the original design concepts of their copies, while Pietta have on occasion “invented” some revolvers of their own. Nevertheless, when this latter company does get it right, they turn out a super product. Such is the case with their interpretation of the Smith carbine, the fourth most popular carbine used in the American Civil War.

Patented in 1857 by a New York physician named Gilbert Smith, this is a percussion weapon, although the charge is loaded from the breech end of the barrel, a mechanism sometimes referred to as a ‘capping breechloader’. The US government tested the Smith at Washington Arsenal in 1860 and found it suitable for further evaluation so 300 were ordered for field trials. The trials proved successful and at the outbreak of hostilities the Union placed an order with Poultney & Trimble, who had been assigned the Smith patent.

Unable to fulfil the order themselves, they subcontracted it out to the Massachusetts Arms Company. By 1863 this latter company also found themselves with bulging order books so in turn passed some of the Smith work on to the American Machine Works. Poultney & Trimble felt that the Massachusetts company was neglecting their product so in September, 1863, all Smith carbine production was passed to the American Machine Works. From their first order in January, 1861 until the final shipment in June, 1866 the Federal Government purchased 30,062 Smith carbines which was almost the total production. The average price paid was $24.90 per gun and this was supplemented by the purchase of 13.86 million assorted cartridges at a cost of $2.72 per hundred.

Early versions of this carbine, around the first 11,000 pieces, were fitted with two sling swivels, one on the barrel band and the other on the butt stock. The rest of the production employed a saddle bar-and-ring sling attachment as featured on the model we have here. Pietta offer the Smith carbine in a ‘Cavalry’ model (as seen here) and an ‘Artillery’ version with sling swivels.

The Smith is a single-shot, .50 calibre weapon which uses special brass cases (originals were India rubber or paper-covered brass foil) and breaks open like a shotgun for loading. A 140mm spring-steel arm, dovetailed and screwed into the barrel, extends back over the joint between the barrel and the frame. A rectangular cut-out in this arm locates over two studs, one each on the barrel and frame, when the gun is closed.

Pressing up on the t-shaped lever in the front of the trigger guard lifts the arm far enough off the studs to allow the gun to break open. Snapping the gun shut once again locks the arm over the studs. Loading the substantial brass “cartridge cases” can be done in situ or - if you have a stock of these - at home before you leave for the range. Either way it is a simple matter of pouring the powder charge into the case, put in your chosen lubricant (in my case a ‘lube pill’) and tapping the projectile home. The “cartridge” is then dropped into the breech, the gun closed, a percussion cap placed on the nipple and you are ready to go.

Usually, as with that other great side-hammer percussion rifle, the Sharps, the flash from the cap has to travel around two right angles before it reaches the main charge, and with the Smith, get through the small hole in the rear of the brass case. Whatever the cause, a bit of fouling or inefficient caps, the gun suffered a few misfires. Previous experience with the same model showed that the problem was easily cured with the use of a nipple primer. A small amount of the same powder used in the main charge (Henry Krank’s Fine) was loaded into the nipple each time and the misfires were a thing of the past.

I have seen it quoted that originals used a conical bullet at 19 to the pound (that’s over 350 grains) backed by fifty grains of powder. The only bullets I had to hand were those shown in the photograph and they proved too long to allow the gun to close. So I fell back on to a 191-grain, .504” round lead ball, dropping the charge weight to 45 grains. Although the carbine is quite short and not particularly heavy, recoil with this combination was comfortable and easily managed. With one or two exceptions, keeping the shots in a five-inch circle at fifty yards was not too difficult and I imagine that if you could find something close to that original conical bullet, then a little experimenting with charges would tighten that up some. After ten or twelve shots the fouling in the breech area caused the brass case to stick so that it had to be nudged out using a rod down the barrel but it was no big deal. The Smith has a very strong mainspring resulting in a heavy trigger pull, but on the plus side there was not one cap that did not explode.

The fit and finish on this example was first class with one minor exception. The hole in the bottom of the fore-end, used for the attaching screw, was rather poorly cut. The part-round, part octagonal barrel, along with the spring arm, trigger guard, barrel band and butt plate are all black while the frame, trigger and hammer are case-hardened. There is also a case-hardened breech block which folds forward when the gun is open. A nice touch on the left side of the frame are facsimiles of the markings found on the 19th century originals. The t-piece used to open the gun is brass. The matt, oiled-look finish on the walnut stock and fore-end was very pleasing.

Two of the advantages of the Smith touted by the original manufacturers were the simplicity of use and the gas tight seal at the breech. The former goes without saying as there is very little, if anything, that you can do wrong. The gas tight breech was obviously comparative to its contemporaries, as there is a definite blow back around the barrel/frame joint, although nothing to cause the slightest concern. The spring arm is very strong and those with arthritic fingers may find a problem although the heat treatment from a few hundred charges of black powder may lighten this, as I have handled a couple of originals which opened a lot easier.

The Pietta is a well made, faithful reproduction of a popular Civil War carbine and will serve shooters and re-enactors well. Also on offer at the same price is a 20g shotgun version with a 24” barrel.