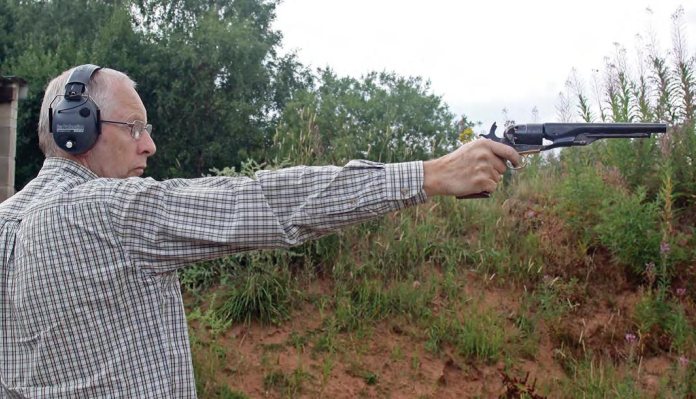 The arguments for and against the Colt open top design revolvers have raged since their inception and will probably do so far into the future. The argument is generally based on the apparent weakness of the design compared to a solid frame revolver with a top strap. Whether you are for or against is a matter of personal taste, but there can be no doubting the success of these arms during the middle part of the nineteenth century, when they were used in earnest. The Paterson revolvers, the first really successful multi-shot handguns, were highly prized by their users, even with their inherent faults and complications. In 1847 their successor, the mighty Walker, set the scene for the next 25 years or so, as a myriad of models saw Colt at the forefront of revolver production, supplying everyone from soldiers, Gold Rush prospectors, lawmen and outlaws.

In fact, anyone needing a revolver could have found something to suit in the extensive Colt range, and by the time percussion revolver production ceased in 1873, around four hundred and 50,000 open top type pistols had been produced in the various models.

The principal desire of an arms manufacturer is to gain a contract to supply the military, and Sam Colt was not slow to pursue this avenue. From 1847, when he provided the Walker revolvers for the war with Mexico, Colt was the major supplier of handguns to the US Army for many decades.

By the late 1850s, Colt was touting the advantage of new ‘spring steel’, which allowed pistols to be made smaller and lighter, without losing any of their strength. Using the new steel, Colt was able to modify the proven 1851 Navy revolver, to create a six-shot .44 calibre model which was not much more than half the weight of the earlier Walker. The new pistol was introduced in 1860 as the New Model Holster pistol, the 1860 Army as we know it today. Within months of the 1860 being available, the North American continent entered one of the bloodiest conflicts ever seen, the American Civil War. Needing replacements for its ageing stock of Colt Dragoon revolvers, the Army was quick to place orders with Colt for supplies of his new revolver.

The 1860 Army uses the same frame and lock work as the 1851 Navy revolver. The top edge of the frame at its front end was relieved to accommodate a rebated cylinder, which uses .44 calibre balls or conical bullets. Early examples used the standard Navy grip, but this was later extended by a quarter of an inch to help with the increased recoil. A completely new barrel was produced, initially of seven and a half inches but soon changed to eight inches, and fitted with the ‘creeping’ loading lever, first seen on some 1855 Roots models. The first few thousand cylinders were of a full flute design, but presumably the strength of the new steel was over estimated, as there were a number of bursts, resulting in a round design rolled with the same naval scene as the 1851 Navy model.

The 1860 Army revolver was produced by Colt up to 1873, by which time over 200,000 examples had left the factory. Over sixty per cent of these were procured by the Union Army Ordnance Department between 1861 and 1865, at an average price of $17.69 each, making it the most widely used revolver during the Civil War.

I have a weakness for Colt products and to my eye the Model 1860 is the best looking of the Army size pistols of the Civil War era. It is not perfect but the fact that it did the job cannot be denied, judging by the large number employed during the conflict. Uberti have done an excellent job in recreating this revolver for today’s shooters and re-enactors.

The model we have here is the standard eight-inch barrel version, with the full round cylinder. The barrel, cylinder and back strap, along with smaller parts like screws and trigger, are gloss black and have a nice finish. The frame, loading lever and hammer have slightly muted case colours, while the trigger guard is polished brass. The walnut grips have Uberti’s standard red/brown gloss varnish finish. The package is well put together, with good overall finish and very respectable, if not perfect, fit to the various parts.

The US Army ordered a number of these pistols with detachable wooden shoulder stocks and this reproduction mimics one of these, with cut-outs either side of the recoil shield, two extra screws in the frame and a shallow groove in the base of the back strap, all designed to facilitate the fitting of the stock. With a stiff load, the screw in right side of the frame can sometimes be a bit of a nuisance, particularly to those with larger hands, as the sharp edge can make contact with your trigger finger under recoil.

Sights are simple, as per the originals, with the rear being a V-notch cut into lip of the hammer, which comes into play when the hammer is pulled to full cock. The front is a white metal tapered blade soldered into a shallow slot in the top of the barrel; in this case, not quite level but it did not impede the operation of the pistol. The creeping rammer works very well, giving good leverage, and is held in place by a spring-loaded catch and latch arrangement.

For those not acquainted with Colt’s open top layout perhaps a short explanation would be in order. The pistol is basically in three parts; barrel, cylinder and mechanism with attached grips. In the mechanism is the cylinder arbour (screwed into the face of the recoil shield) which has a slot cut crossways at its front end.

When the pistol is assembled (with the cylinder on the arbour) the arbour fits into a hole under the barrel and, pushed fully home, its slot lines up with another two slots cut crossways in the barrel lug. A tapered wedge is then tapped into the aperture to lock the parts together. To aid the retention of the parts, there are a couple of pins on the front of the frame, which fit into two corresponding holes in the barrel lug. A screw on the left side of the barrel lug, just above the slot, engages with a lip on the wedge to prevent the latter from coming all of the way out when the pistol is disassembled. Should you be unfortunate enough to lose the wedge, then the revolver is out of action, so periodic checking of this screw is advised.

The 1860 is a well-balanced pistol and those with larger hands will appreciate the little extra length of the grip. With a modest charge of 28 grains of Henry Krank black powder behind a .454-inch lead ball the recoil is easily managed. I have heard of others using a .457-inch ball in their .44 calibre revolvers, so check out the chamber bore to determine which is suitable for your pistol. For lubrication, I use a homemade ‘grease cookie’ fabricated from beeswax and a little lard. This is purely to keep the fouling from the black powder soft. I prefer Remington caps for ignition and this pistol liked the number 11s.

At 25-yards, this gun printed slightly above point of aim with the above load. I was happy enough with the best six shot groups around three and a half inches but a little tweaking with the powder charge could probably drop this some.

Much has been written about multiple discharges, or chain fires, from percussion revolvers and various reasons and solutions have been put forward. In some 30-years of shooting black powder revolvers I have only experienced it once when a second chamber ignited. It’s a bit of a surprise but no damage was done to either the pistol or me. Chain fires occur from the front of the cylinder and are principally caused by a badly fitting ball. The correct size lead ball will have a thin ring of lead shaved from its circumference as it is forced into the chamber, thus providing an air tight seal above the powder. Smothering the front of the cylinder with grease is both messy and unnecessary if the ball is the right size. Sam Colt’s original patent describes how the layout of the rear of the cylinder was designed, with each nipple set in a recess, to prevent such an occurrence. Experiments have been carried out with six loaded chambers and only one capped, and at no time was it possible to cause a multiple discharge from the rear of the cylinder.

Possibly the biggest drawback of the Colt open top design against a solid frame revolver is the tendency for the occasional spent cap to fall into the channel between the hammer and the frame. I fired eightyfour shots and it happened once, so not too much of a problem. Should this occur, then it is likely that the next chamber will not go off, as the cap fragment will be preventing the hammer from going all the way forward. Keep a pair of thinnosed pliers in your tool box. You may see shooters turning the pistol 90-degrees clockwise as they cock it to flip the spent cap away. Raising the pistol vertically above your head will do the same job but expect to be jumped on rather heavily by the RCO! Black powder being what it is, sooner or later fouling will occur around the front of the cylinder and on the arbour to slow down, or even stop, your shooting. When this occurs, tap out the wedge and give the arbour a wipe, then apply a small amount of grease into the arbour grooves. Run a brush through the cylinder centre – you may as well wipe the barrel while you have it off – and reassemble. I managed 42 shots with the Uberti before I felt the need to do this.

Black powder residue has a tendency to get everywhere, so make sure you clean every nook and cranny, particularly in the winter when conditions are damp. Any fouling left unattended will attract moisture, and if left, will turn to rust and eventually pitting. You may use one of the propriety cleaners on the market but good old hot soapy water will do the trick – just ensure you dry all parts of the gun off thoroughly.

Finally, for those who think this open top design is weak, remember that the Walker revolver could hold 60-grains of powder in each chamber, the same load as a musket of the day. There were several reports of cylinders bursting with this load but I have yet to read of a pistol coming apart. The Walker was the most powerful handgun you could but up until the advent of the .357 magnum in 1935.