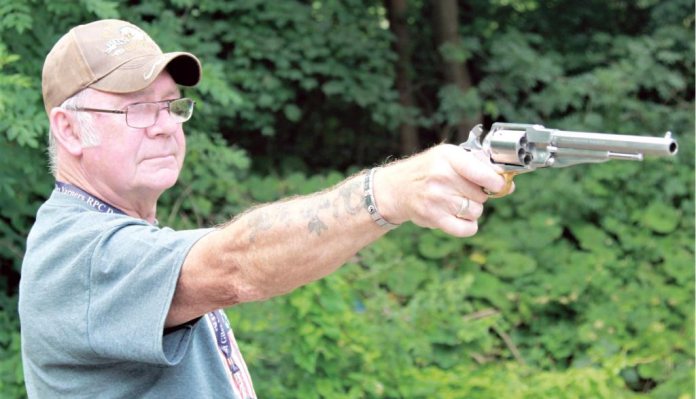 Google ‘Euroarms’ and you are led to a website that seems to represent two companies, Euroarms of America and Euroarms Italia S.r.l., but in fact, the American side looks like no more than a distribution network for arms manufactured in Italy. The parent company is based, like the majority of Italian gunmakers, in Brescia. There is little information about the company on the site and it does not appear to have been updated for some time, with the ‘printable catalogue’ being dated 2008!

The little information that I have is that the company is still in production and owned by two ageing brothers, although guns are turned out sporadically as and when time or inclination allows. The UK distributor, Henry Krank, continually informs us that stocks are very limited, then a few more seemingly turn up from Italy. It is probably only a matter of time before stocks do run out and production ceases, so if you fancy a nice copy of the Rogers & Spencer revolver then get one now, as these people are the only ones making them, as the model has disappeared from the Pedersoli catalogue.

Probably like many of you, I had never heard of the International Association of Chiefs of Police and wondered what it might have to do with the Remington New Model Army revolver.

Our friend Google came to the rescue again and the answer is, seemingly, nothing. The IACP is an international organisation open to police officers, both chiefs and otherwise, private detectives, private security personnel and anyone else connected with law enforcement and their website makes for some interesting reading. Based in Virginia in the USA, they are celebrating their 125th anniversary this year, and the organisation has some 30,000 members worldwide.

Off the top of my head, I cannot think that the Remington New Model Army (NMA) was used by any law enforcement agencies during its lifetime in the latter half of the 19th Century; so, quite why Euroarms is marketing this ‘commemorative’ revolver remains a mystery, unless someone in the owners’ family is in the police force.

During its heyday, the Remington NMA was second only to the Colt 1860 model in popularity, both in the civilian market and with the military. It is often erroneously referred to as the ‘1858 Remington’, due no doubt to the patent date on top of the barrel, a reference to the patent granted to Fordyce Beals on Sept. 14th, 1858. Remington did not begin manufacturing the NMA revolver until 1863 and production ran until 1875, by which time over 120,000 pistols had been made.

My only previous experience of Euroarms products is a couple of encounters with the above- mentioned Rogers & Spencer reproduction, which turned out to be very enjoyable. All the major Italian manufacturers offer this Remington revolver in various guises and Euroarms list it in blue and stainless as standard models, along with this ‘special edition’. Although I will admit to liking a bit of ‘bling’, I have never owned a stainless-steel gun, but I think that the Remington suits this finish better than its main rival in this class, the Colt 1860 Army. The main reason cited for buying stainless is obviously its stated resistance to rusting under adverse conditions, but in the case of black powder I would caution you not to be too complacent when cleaning. Any fouling residue left in the nooks and crannies will, given time, attack your precious possession.

The small gold crest and title on the left side of the barrel lug is not the only thing that makes this pistol a bit different from the standard version. The grip panels are particularly nice on this example and look to be special wood. While the wood to metal fit is very good, there are a couple of minor overlaps in the backstrap area but nothing to cause concern. Of rather more annoyance are the marks on the top side of the loading lever, although they are not seen when this is locked in place. I would presume this is a one-off on this specific pistol that somehow slipped through the QC net.

The edges on the metal are well-defined, particularly the barrel flats, and the gun is nicely polished. The fit of the brass trigger guard could be a bit better but does not affect the gun’s performance. The catch-and-latch arrangement for holding the loading lever in place shows precise fitting and a good spring ensures that this will not move during firing.

The front sight, dovetailed into the barrel, looks rather like the upturned end of a hollow ground screwdriver with the blade rounded off. In this case, it is a little shorter than I have seen on other versions of this model but proved to be just about right in practice. The rear is a U-shaped channel along the top strap, culminating in a V-notch at the rear end. The hammer on this pistol is a tad shorter and sits a little lower than the Colt 1860, but to me feels more comfortable in use. The tip has simple cross serrations and we see here some minor imperfections, but it gives a good hold and is not enough to cause any worry. One benefit the Remington has over the Colt, is a screw in the front of the trigger guard that allows you to alter the tension on the mainspring and consequently the weight of the trigger pull. Out of the box, this one was around 4½lbs, so I left it at that. The wide, flat trigger is also better than the Colt’s.

There have probably been volumes written on the perceived strength of the Remington design over the Colt and doubtless the one-piece frame and grip layout, with a removeable cylinder, would seem to offer an advantage over the latter’s four-piece barrel/frame/grip straps arrangement. I find the grip on the NMA fairly comfortable but those with larger hands could experience their second finger being nipped between the rear of the trigger guard and front strap. This may be particularly noticeable under recoil if you are using a stout load.

I have always found it easier to remove the cylinder from the left side of a Remington frame and insert it via the right side, and it is no different on this example, but I do not think I have ever had an example where it is so easy to replace the cylinder. I’m not sure whether this is due to the hand not protruding as far into the frame recess as others I have come across, the front edge of the frame being slightly bevelled on both sides of the forcing cone, or a combination of the two.

The capping cut-out on the right side of the recoil shield is smaller than the Colt and does not have the latter’s groove, but this is offset by the nipples being angled slightly outwards, making capping with fingers a little easier. The ‘safe carry’ mode on this pistol consists of slots cut into the rear of the cylinder between each nipple recess, into which the face of the hammer rests, to allow the gun to be carried fully loaded. Again, this looks to be stronger than the Colt ‘safety pins’ set-up.

Timing on this gun was very good, with the cylinder locking bolt dropping into place at precisely the moment the hammer reached its farthest travel. Lock-up was tight, with no fore and aft movement and only the slightest hint of lateral travel.

Shooting from a rest, with a load of 25-grains of Henry Krank fine black powder behind a .454-inch lead ball, five-shot groups averaged a shade under four-inches. Shooting off hand this increased to 5-inches plus. I was happy with this, but it could easily be improved with a little load experimentation and a more competent pistol shooter. Ignition was by Remington No. 11 caps and I did not experience any misfires in around one hundred shots, and with the Remington’s solid frame I didn’t encounter the ‘broken cap in the hammer channel’ that sometimes occurs with the open-frame Colt revolvers. The gun began to slow down due to fouling after thirty shots, so a bit of judicious cleaning was called for. Removing the cylinder, I gave the inside of the frame around the forcing cone a rub with an old toothbrush, wiped the arbour and applied a bit of grease, re-assembled (time taken around one minute) and I was good to go for another thirty. Should you be shooting competitions, you would doubtless go through this cleaning regime each time you emptied the cylinder.

The gun was cleaned with hot soapy water, paying particular attention to areas like the nipple recesses in the cylinder and the hammer channel. I removed the trigger guard but there was negligible dirt under there. When it was completely dry, I put a drop of oil into the cylinder locking bolt hole and another on the base of the hammer.

Although I am a die-hard Colt fan, it was good to get to grips with a Remington again and I can understand why this pistol gave Colt some stiff competition during and after the American Civil War. Granted, you are not getting Pedersoli quality with this gun but then again you are not paying a Pedersoli price, and for a stainless-steel pistol this is good value for money. Quite who the ‘commemorative’ theme will appeal to, I am not sure, but if you want something just a bit different then check this one out.