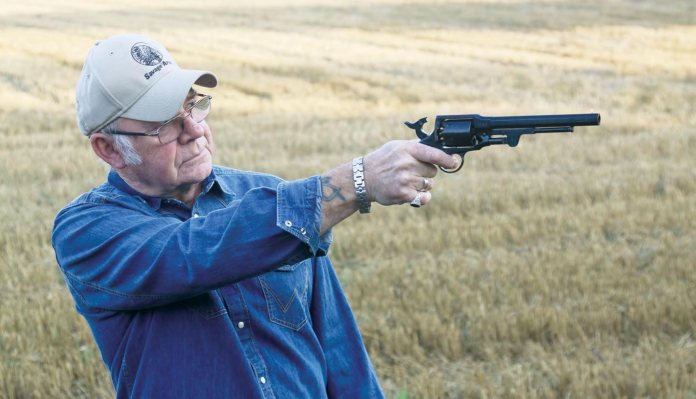 Living in the shadow of its more illustrious cousins from Colt and Remington, the Rogers & Spencer percussion revolver never got the chance to prove itself under the rigours of combat, which is a shame as it would probably have acquitted itself very well.

Sam Colt was always ready to accept anyone’s money for his products and shortly before the outbreak of the American Civil War, the first orders for his 1860 Army revolvers were sent to dealers south of the Mason-Dixon line. But with the outbreak of hostilities, he turned his production over to producing arms for the Union and by the end of the War the government had purchased some 127,000 examples of this pistol. Remington too had a share of the Northern revolver market, with sales to the Ordnance Department of over 115,000 of their .44 calibre revolvers. By contrast, the Rogers & Spencer contribution to the Northern war effort was a mere five thousand of their own .44 calibre pistols, although they did supply an additional two thousand of the Pettengill double action revolver.

The whole order was placed into storage in the New York arsenal, where they remained until June 19th, 1901 when, as part of a job lot of almost thirty thousand Civil War era revolvers, 4982 Rogers & Spencer revolvers (presumably the other 18 were ‘souvenirs’) were purchased by New York military surplus dealer Francis Bannerman for the princely sum of 25.27 cents each – the Army had paid $12 each back in 1864! In 1907, the Bannerman catalogue had these revolvers for sale at $3.85 each. Because of this lack of military use, many original Rogers & Spencer revolvers can be found today in remarkably good condition.

The Rogers & Spencer revolvers delivered to the Ordnance Department were six-shot, single actions with a 7½-inch octagonal barrel and weighed a shade under three pounds, half a pound more than the Colt. They are of a solid frame design like the Remington, seen by many as an advantage over the Colt’s open top layout, as both of these solid frame designs eliminate the dreaded ‘cap in the hammer channel’ syndrome, often experienced with the Colt. The barrel, frame and cylinder were blued, while the hammer and loading lever were case hardened. Unlike the Colt and Remington revolvers, there is no provision on the rear of the cylinder for any kind of ‘safety’ arrangement. The two-piece walnut grips, as well as various metal parts, will invariably be found with Government inspector’s markings.

Surprisingly, the two major Italian reproduction revolver manufacturers, Uberti and Pietta, have never, to my knowledge, offered a Rogers & Spencer clone in their line-ups. For a while, Pedersoli did produce their version of this revolver, with a Lothar Walther barrel but it is no longer listed in their inventory, presumably due to poor sales. The Henry Krank catalogue lists a Euroarms version with the same type of barrel.

The model that we have here has the Walther barrel and is a very well-made revolver and comes with a reputation of being possibly the strongest of the Civil War era revolvers. All of the metal work, other than the brass escutcheons in the two-piece walnut grips and the front sight, is finished in black. Edges are quite sharp and the fit of the parts is very good. The grips are not overly long, sitting somewhere between the Colt and the Remington, but the flare at the base provides a very comfortable hold. The trigger is wide and smooth and broke crisply at around five pounds. The hammer spur sits higher than its contemporaries at rest but is easily cocked with the thumb of the shooting hand, helped by the strong but not overly sharp chequering.

If I had to pick a minor fault, it would be with the pin in the loading catch, which is used to release the catch for loading. Unlike the Colt and Remington, this can be quite sharp, particularly if the catch spring is a shade on the strong side. I guess this was done originally as a cost saving exercise and that Euroarms have stuck to the design for authenticity.

Each shooter will have their own idea as to which is the best or most comfortable way to hold a single action revolver, whether it be single-handed or two-handed, and will give some thought to the placement of the right thumb (for right-handed shooters, that is). In this respect, the left side of the recoil shield on this pistol is concave shaped to provide a nice resting place and an aid to helping control the recoil.

Judging a firearm, or any other tool, purely on its looks could lead you to some disappointments when it comes to performance, so its true worth will only be found on the shooting range. Whilst the Rogers & Spencer is not as pleasing to look at as the Colt or the Remington (although it is a beauty queen compared to the Pettengill), it nevertheless feels good in the hand and points extremely well.

Sights are very basic, with no adjustment at all. The rear is a channel in the top strap, culminating towards the back in a sharp ‘v’, while the font is a brass cone screwed into the barrel. Given that these pistols were not designed as target weapons, this set up is more than adequate at a range of 25-yards, and even at twice that distance I could easily keep most shots inside a 12-inch circle, and doubtless better shooters could cut that down even more with a little practice. A nice touch on the top strap is the inclusion of original style Rogers & Spencer markings.

With a chosen load of 25-grains of Henry Krank fine black powder behind a .454- inch lead ball and a grease cookie, and ignited by Remington caps, the Euroarms performed admirably all day. Recoil was fairly modest and there was not one misfire during some one hundred shots. A couple of breaks in shooting meant that the fouling had time to harden a little but it was no big deal to take out the cylinder and give the parts a quick clean. The combined loading lever and cylinder arbour come out of the frame as a unit (see photograph) and are released by a quarter turn of the screw in the front of the frame. A concave cut-out in the screw lines up with a similar recess in the bottom of the arbour to allow removal and locks it back in place when turned back. This idea had been used on the Whitney Navy revolver several years before the advent of the Rogers & Spencer. On a par with the Remington system, it is a distinct advantage over the Colt open top design, which requires the removal of the barrel to take out the cylinder.

A big advantage over almost all other percussion revolvers is when it comes to placing the percussion caps on the nipples. The cut-outs around the nipples are much larger than other models and the nipples themselves are angle outwards slightly giving excellent access. Capping with fingers only, rather than a mechanical device, proved no problem at all, even in the cold weather.

The Euroarms Rogers & Spencer revolver comes in at a fair premium over the standard Colt and Remington offerings that are available but for your money you get a strong, well-made pistol that performs as good as any standard models out there at the moment. With a little care on your part, it will last a lifetime and might just have a bit more street cred on the range. Today’s shooters have the opportunity to sample the delights of a revolver that the Union troops missed out on during the War between the States. Their loss is your gain.