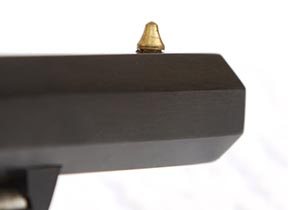 While I doubt that there has ever been a survey carried out to determine Western shooters’ preferences – although it would be an interesting exercise – I would guess that there are more .44 revolver shooters than those who prefer the .36 calibre. It is probably also safe to assume that reproductions of the pistols that were most popular, i.e. Colt and Remington, during the era of their use, are the favourites among today’s shooters, whichever calibre is chosen. Of course there is nothing wrong with choosing a revolver from one of the market leaders and the Army and Navy models from both of the above mentioned manufacturers are well proven products. But delve a little deeper and you will find interesting arms from lesser known concerns, one of which was the Whitney Navy revolver, a .36 calibre pistol here reproduced by Palmetto of Italy.

Eli Whitney Snr., the inventor of the cotton gin, began manufacturing long arms in the late eighteenth century but it was not until 1847 that his son, by then running the business, took the company into the production of pistols. When Sam Colt, not having a factory of his own, was given an Army contract to manufacture 1,000 revolvers he sub-contracted the job to Whitney on the consideration that he (Colt) received a share of the profits and took possession of the manufacturing machinery when the work was completed. Aside from setting Colt on the road to fame and fortune, it was the inspiration for Whitney to begin making handguns in his own right.

His first efforts produced a small number of pocket sized revolvers, none of which was manufactured in sizeable numbers. But when Colt’s master patent expired in 1857, Whitney was free to begin production of the pistol which is reproduced here. These Navy pistols are designated as First and Second models, with each Model having a number of sub-types, showing various changes throughout production. The very early examples did not have a loading lever and many of the First models had, inexplicably, the name EAGLE CO. on the barrel.

Even though the Army purchased over eleven thousand of these pistols during the Civil War, they were not particularly popular with the troops, one report stating that “every part except the barrel is subject to breakage”. The U.S. Navy acquired some six thousand Whitney’s during the conflict. At the end of the War enlisted men were allowed to take home their revolvers, having the value deducted from their pay. One hundred and fifteen men chose to keep their Whitney pistols. The Ordnance Department disposed of many of the Whitney Navy revolvers over a period of some thirty years after the War ended and when Francis Bannerman purchased almost thirty thousand surplus pistols in 1901, one hundred and seventy two were Whitney’s, for which he paid 12.65 cents each.

The Palmetto test gun was delivered in a plain cardboard box with no paperwork or instructions, not a big deal when you consider the price of the pistol. The Whitney is a closed frame design with the barrel screwed into the front of the frame, just like the Remington NMA revolver. Indeed, the rear portion of the frame, along with the trigger guard and grips, are almost identical to the Remington, albeit on a smaller scale. The plain, six-shot cylinder (originals were rolled with an eagle, shield and lion motif) is held into the frame by a three-piece combination arbour/rammer. This passes through the front of the frame and is retained by a cross bolt running laterally. The end of this bolt is flattened, enabling it to be turned by hand, and one flat is stamped with a ‘0’.  With the flat turned horizontally, and the ‘0’ facing upwards, a semi-circular cut out in the bolt allows the arbour through. With the arbour pushed fully home, the bolt is turned one hundred and eighty degrees to lock into another semi-circular cut out in the arbour itself, thus locking the mechanism in place. In practice the flat end of the bolt proved to be on the ‘wrong’ side of the frame and interfered with the loading. Removing the screw and turning the bolt around solved this minor problem. The front of the rammer is held in place by a Colt-type catch and latch arrangement.

The barrel, frame and cylinder are the customary Italian black finish and are of a very acceptable standard with all edges being nice and sharp with no signs of over polishing. There were one or two very minor blemishes in the finish but nothing to cause any concern. The rammer assembly, hammer and trigger are faintly case-hardened and the trigger guard and grip screw escutcheons are plain brass. The two-piece grips are oiled walnut, which on the test revolver were slightly oversized. The front sight is a brass cone screwed into the barrel and the rear is a groove in the top strap reminiscent of the early “pinched frame” Colt Peacemakers, and in this instance I would have liked it to be a little wider and deeper. The knurling on the hammer is positive without being too sharp. First impressions were that this was a decent pistol at a very competitive price.

Cocking the pistol gives you your first surprise in the form of a strong mainspring. Whilst lightening this spring would make using the pistol a little easier, the strength obviously contributed greatly to the fact that every cap detonated first time. Coupled with the precise fit of the hammer face into the frame meant that even if a cap fractured on impact, it was impossible for any residue to fall into the hammer/frame gap.

The timing on the test piece was excellent and the lock up extremely tight, although there are no run-ins to the locking notches on the cylinder so you could soon see some wear in this area.  That strong mainspring means that the trigger pull is also on the heavy side at over six pounds on this example. Taking a leaf out of Remington’s book, safety notches are cut into the rear of the cylinder between the nipples where the face of the hammer should rest. However, these were not cut deep enough and I could turn the cylinder by hand when it should have been locked in place.

The nipples are a little on the small side and the Remington percussion caps had to be pinched slightly to prevent them from falling off during shooting. They are angled away from the centre axis making capping by hand a little easier. The powder load that I normally use in my Colt 1861 repro - 18 grains of Henry Krank’s fine - proved to be just about the maximum that this cylinder would hold, and used with a grease cookie meant that the .375” ball was flush with the front of the chamber. Recoil was quite modest and the pistol shot a little high and to the left.

There were no problems with the Whitney during the test and those looking for an alternative to the usual Colt and Remington offerings, or those on a budget, should take a serious look at this revolver if you are in the market for a .36 calibre model. If this sample is anything to go by they will be much better received than their 19th century ancestors.