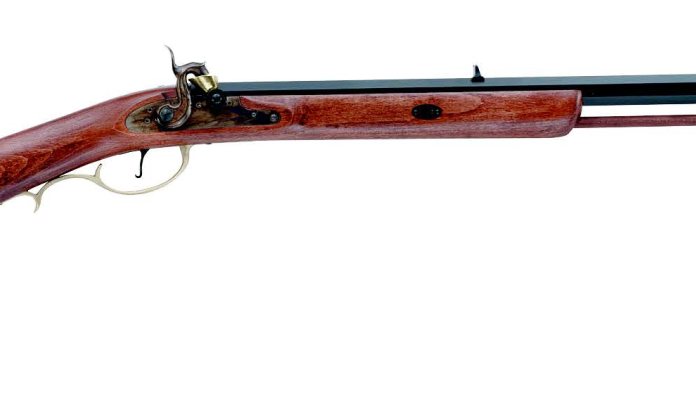 The two guns that usually vie for the title of the ‘Gun that Won The West’ are the Colt SAA revolver and the Winchester 1873 rifle. While it is doubtless that these two firearms icons played a significant part in Westward expansion after their introduction in 1873, pioneers had been pushing West for two and a half decades before this, relying on much less sophisticated, but nevertheless dependable, forms of firepower.

As the ‘49ers began their trek to the California goldfields, the need for weapons was paramount, both as a means of self-defence and to put meat on the table during the journey and at their final destination. If they were fortunate, they may have carried a multi-shot revolver for the former but would most likely depend on a single-shot muzzle loading long gun for the latter.

Many of the early settlers originated from the Eastern states, where the wrongly-named Kentucky rifles, in their various guises, were in abundance and many of these families would likely bring their rifle with them. Those that did not have one at home would get the opportunity to buy one at the final jumping off point of St. Louis, where the Hawken brothers had set up business. For many, cost was an important factor and, although the gun was an essential requirement, the price of a Hawken and other quality pieces could be prohibitive.

Fortunately, there were many cheaper options, in the form of trade guns and less expensive copies of the up-market models.

These latter groups were very often turned out by individual gunsmiths and quality varied greatly. Great numbers were made without any maker’s name or other indication of who made them, but many others will be found with the name ‘Remington’ stamped on the barrel, and in some cases on the lock. This is not an indication of Remington manufacture but indicates that the barrel or lock was supplied to the trade by Remington, as the sale of prefabricated parts was a major part of the Ilion firm’s business.

There is a great variety in the lengths and calibres of these single-shot rifles, with barrel lengths ranging from around thirty inches to over forty inches and calibres from as small as .32- to .75-inches. For those who were Westward bound, the choice would likely have been something that handled well and had the power to knock down some of the larger quarry, buffalo, grizzly and the likes, that would be found on the journey. To that end, something like the example we have here, with its sub-30- inch barrel and fairly large bore, would have fitted the bill nicely.

Today’s UK muzzle-loading rifle shooters will be less likely to worry whether or not their chosen gun will take out a charging grizzly bear than its ability to perform well against a stationary target at varying distances. Modern materials and production methods will generally provide customers with better quality products and much more consistency from one gun to another. One thing that has changed little, is the variety of guns available and a glance through the Henry Krank catalogue will show almost one hundred models, encompassing flintlock and percussion locks. No less than two thirds of these come from Davide Pedersoli & Co., with many of their models being offered in more than one calibre.

Quality at a (low) price

The Country Hunter model is not based on any particular nineteenth century manufacturer’s products, but rather is a generic example of a typical, no-frills working gun of the period, commonly known as halfstock ‘sporting guns’; specimens of which would have gone west on many covered wagons. This really is a basic rifle, which, other than its brass trigger guard, is lacking any form of decoration and incorporates nothing that is not necessary for the operation of the arm. To this end, you get the Pedersoli quality we are used to, with a price tag that we are not.

As would be expected from its lack of embellishment, the rifle has very clean lines and looks at first glance to be well balanced, and so it proved to be in action. The one-piece walnut stock has an oiled look finish and all edges and inletting are very good, with nice wood to metal fitting. The barrel, sights and ramrod pipe have a matt black finish (the muzzle is left ‘in the white’) with the thin curved steel butt-plate and its two screws having a gloss blue finish for some reason. Perhaps they thought that the matt finish would quickly turn glossy anyway with constant use. The black trigger has a traditional curl at the tip, a style that I once heard described as looking like a bent nail! The lock and hammer are case-coloured and the nipple is fitted with a brass flash guard to protect the wood and metal in that area from burns. This item is available to buy separately should your existing gun not have it fitted as standard. Readers will notice the end of the screw in the lock plate, which is left white. This is a peculiarity that I have seen on many Pedersoli locks (same screw every time) and there is probably a very simple explanation, but up to now I have not fathomed it.

Sights are as basic as you can get, with a simple V-notch in a blade at the rear and a large blade at the front. Both are dovetailed into the barrel and are adjustable for windage but not elevation. The brasstipped wooden ramrod fits in a substantial pipe under the barrel. The barrel itself is held into the stock by a screw in the top tang and a wedge through a slot in the stock, which has a case coloured escutcheon on either side.

For a rifle of this calibre and with this barrel length, the Country Hunter is surprisingly light at a shade under six pounds, a factor which, while possibly increasing the felt recoil some, makes it fairly comfortable to shoot offhand. Standard projectile for the test was a .490-inches round lead ball weighing around 180-grains, wrapped in a .005- inch lubricated cotton patch. Ignition was by Remington percussion caps. Three different powder charges, all Henry Krank medium black, were tried during the day. These were of 45-grains, 50-grains and 55-grains and loading was done with a drop tube. Three-shot strings were fired initially, cleaning the barrel after each string and subsequently cleaning after each shot. In each case, cleaning simply meant running a moist patch down the barrel followed by a dry one.

The lightest charge was quite mild to shoot and three-shot groups were around three-inches at 50-yards, shooting from a rest, with no appreciable difference between the two cleaning methods. The two heavier loads brought the groups down slightly but there was little to choose between the two and again the cleaning regime made no difference. I finally settled on the 50-grain load and, with a bit of care, managed three shots in under 2½-inch, a result that could easily be bettered by more competent shooters. I cannot say whether the more expensive brands of black powder will give better results, as I have no experience with them, but I do know that many shooters will use nothing else. If you wish to wring the best out of any gun, then it is only fair that you try all the options.

Get the balance right

The gun is, as stated, very well balanced and the ornamental trigger guard gives a very comfortable grip. The trigger pull is a little on the heavy side but could doubtless be improved with a bit of work. Having broken a wooden ramrod in the past, I now use a modern fibreglass rod for loading and cleaning.

The Pedersoli website describes this gun as “… the rifle for the new shooter of muzzle loading firearms, who wants an inexpensive way to start this pleasant sport”. While it is true that you can buy a muzzle loading rifle for less money, you would not get the Pedersoli quality. The Country Hunter is also available as a flintlock model for a few pounds more.