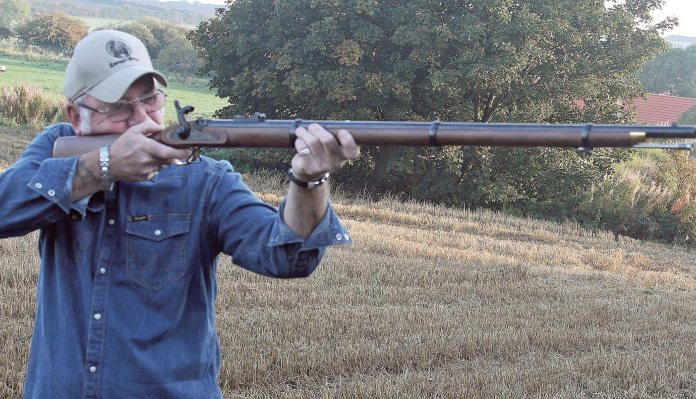 I dare say that it is probable that a number of readers will have used an Enfield rifle (though not a muzzle loader I hasten to add) while in the service of the Queen or perhaps even her father. For around 100-years Enfield long arms, in one form or another, proved to be the mainstay of the British infantry forces. The Royal Small Arms Factory, completed in 1816, was situated in the London borough of Enfield and was devised to improve the poor quality of weapons used in the Napoleonic War, the majority of which had various parts made by individual makers and often assembled with less than satisfactory results.

The first long arm produced with a rifled barrel was the Pattern 1851 (P51) rifle-musket, but this was in limited numbers and was quickly replaced with the Pattern 1853 or P53. Using the same length (39-inch) barrel as its smoothbore predecessor, the new rifle enabled soldiers in the second rank of a close formation to have the muzzles of the weapons in front of the faces of the rank in front while shooting over their shoulders. Try running that past your range officer today!

The first of these rifles were issued to regiments in the Crimean War in February 1855. Target practice for recruits was on a six-foot by two-foot target with a two-foot bullseye, scoring one point for a hit on target and two for a bull at six hundred yards. For longer distances, up to nine hundred yards, a larger target with three-foot centre was used with the same scoring criteria. A score of seven points from 20 shots on this large target was considered a marksman.

In the 14-year period up to 1867, around one and a half million P53 rifles were produced and the weapon saw service all around the globe and in a great many conflicts. The P53, or rather its ammunition, was a contributing factor in the Indian Rebellion of 1857. As the new rifle used a larger projectile than the earlier models, the paper cartridges were supplied pregreased to ease loading. This grease was beef tallow or mutton fat and was offensive to the Muslim and Hindu Sepoys that were employed by the East India Company, and they refused to “bite the bullet” as they had done with the previous ammunition.

Regiments of the British Army serving in New Zealand were issued with the new rifle in 1858 but it turned out to be too long and heavy in the bush and was soon replaced with better handling breech loading carbines.

By far the greatest use of the P53 was in the American Civil War, where it was used by both sides and an estimated nine hundred thousand were imported into America, making it the second most popular long arm used in that conflict after the Springfield Model 1861. The Royal Small Arms Factory was privatised in 1987 – as Royal Ordnance – and closure was announced at the end of that year, with the doors finally closing in 1988. The last weapons to be produced at the factory were examples of the SA80 before production was transferred to Nottingham. The site is now largely covered by a housing development with the original machine shops retained as small workshops and retail units.

The 1853 Pattern rifled musket, often referred to as the 3-band Enfield because of the three metal bands holding the barrel on to the stock, is proving as popular today as it was back in the nineteenth century. With today’s interest in re-enactment, reproductions of this rifle are proving a hit with Civil War buffs on both sides of the Atlantic, as well as those portraying early British military history. It will also be found on many target ranges, both in serious competition and in the hands of large numbers of shooters who enjoy the pleasure and challenge of muzzle loading rifle shooting. There have been a number of copies of this rifle available over the years and the example we have here is produced by Davide Pedersoli of Italy. Long renowned for the quality of their products, this fairly recent addition to their catalogue continues a tradition of excellence stretching back to the company’s foundation in 1957.

The Enfield’s simple, nofrills design makes for a very attractive package, even if that long barrel does seem excessive by modern firearms standards. Given that it weighs over 8.5- pounds it is also surprisingly well-balanced, with the weight being spread over a total length in excess of 54-inches. It is comfortable to shoot off hand but I would not like to carry it, along with its accessories, around a battlefield all day.

The one-piece walnut stock is exceptionally well-finished, with nice clean edges and the wood to metal fit is excellent. The right side of the butt is marked with a ‘Birmingham Smallarms Trade’ cartouche. That long barrel shows evidence of good polishing beneath its gloss black finish and is fastened to the stock with the three barrel bands (each in turn held with a screw), which give the rifle its nomenclature, along with a screw in the top tang. There are the obligatory Italian marks on the left side of the barrel near the breech. The front band incorporates a sling swivel, with another attached to the front of the trigger guard, which is of brass construction as is the butt-plate and front nose cap. The hammer and lock plate, the latter stamped with a crown and an “1861/ TOWER” mark, are coloured, possibly artificially rather than the traditional 19th century case hardening process.

The front sight is a small rectangular block, with the top shaped to a blade, the unit being soldered on to the barrel. The rear is a tip up ladder arrangement, fitted into a base with stepped sides. The right side of the base is marked with graduations from 1 to 4, obviously hundreds of yards, with the ladder having 5 to 8 markings. The ladder is held in place, up or down, by a flat spring in the base and the whole unit looks to be screwed on to the barrel, possibly with a screw under the spring. The long barrel makes for an extended sight radius, and the picture is pretty good for a basic set up.

The rifle is completed by a steel ramrod, which is threaded at one end for the attachment of accessories, with the other end having the round bullet-ramming nose and a jag slot. The unit does not screw into place but is held reasonably securely when pushed home. A small pin through the stock would indicate that there is a flat spring in there, as a little resistance is felt when the rod is about six-inches from home.

My experience with muzzle loading rifles has been generally confined to the use of a patched round lead ball as a projectile and I was prepared to use the same method with this piece, when I came across an interesting review on a shooting forum (www.full-bore. co.uk). The said appraisal was for a round nosed, hollow based bullet, which the writer seemingly used with some success in just such a rifle as we have here. As my reviews are limited to a half day, or full day at the most, I deemed it impractical to run to the expense of making these bullets, so I contacted the author of the aforementioned review, Adam Sutherland, and he most generously offered to provide me with a few of his home made ‘cartridges’ for use with the Pedersoli.

I will not go into the manufacture of the paper cartridges here, suffice to say that a charge of seventy grains of TPPH black powder sits behind the 0.564-inch bullet weighing 515 grains. The powder is contained in a re-usable plastic tube, which makes loading fairly quick and very easy. (Check out the above site and go to: Everything Shooting/ Muzzle loaders & Black Powder/ Enfield Pritchett Cartridges for a detailed explanation).

Recoil with this load was not overly heavy but you do know that you are shooting a ‘service’ rifle, designed for more than punching holes in paper. At 50-yards the best 5-shot group I could manage was around six inches, pleasing by my standards but well below what this rifle is capable of. At double the distance the group size almost doubled, so I doubt that I would have made ‘marksman’ back in the day! I ran a mop down the barrel every two shots and the bullets rammed home with little effort, doubtless aided by the greased paper. I did get to shoot a few patched balls during the day, which I found not quite as accurate and not nearly as convenient to load. For those contemplating serious work with these rifles I would think that the effort and expense of making the Pritchett bullets would reap rewards.

I enjoyed my all too brief time with the rifle and everything worked just as it should, something I have come to expect from Pedersoli products. Should you want something a little shorter, and then there is a two-band version available with a 33-inch barrel.