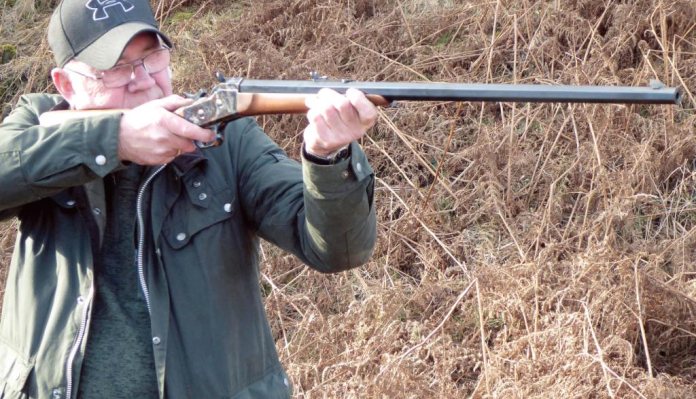 Shooters, collectors and re-enactors with an interest in American history will be familiar with the firearms produced by the Remington family during the 19th and early 20th centuries. Most likely, the two guns that come to mind among these enthusiasts will be the New Model Army percussion revolver and the rolling block series of rifles. The former is recognised as a strong and efficient handgun, while the latter has served soldiers, hunters and target shooters throughout the World.

In 1863, Remington designer, Joseph Rider, patented a split breech design, only to find it had similarities with an earlier patent belonging to Leonard Geiger. While rider’s action was not a direct infringement of Geiger’s, a little over a year later Remington acquired the Geiger patent to essentially control production of this type of mechanism. Rider improved his design and, by 1866, had developed it into the now familiar rolling block action, one of the simplest and strongest systems for single shot firearms.

As with most firearms manufacturers of the day, Remington relied upon military contracts to keep the business running successfully, and the Rider designed rifles did this admirably. In 1865-66, the US government purchased some twenty thousand split breech carbines in rimfire calibres, most of which were delivered too late to see action in the Civil War and many were later repurchased by Remington.

When the rolling block as we know it today appeared, it was hastily taken up be many governments as their standard rifle. In Scandinavia, it was also manufactured under licence by Sweden, Norway and Denmark, with the latter using them until around 1940. During the early part of the First World War, although production of the rifle had ceased, the Royal Navy purchased a quantity in 7mm Mauser calibre from Remington’s warehouse stock. In late 1914, production was resumed to supply the French army and, during the next two years, some one hundred thousand rifles were delivered in 8x50mmR calibre, used to arm rear-line troops. In all, over forty countries used the rolling block as their standard rifle at one time or another. It is estimated that over one million rolling block military rifles were produced between 1867 and 1888.

The success of the military contracts allowed Remington to use their extensive manufacturing facilities to cater for single shot rifles in the civilian market and their products provided competition for the likes of Sharps and Winchester. As with their competitors, Remington offered these rifles in a vast array of models, with a long list of calibres, variations in barrel length and weight, stock design and special sights etc. as well as set triggers and a choice of butt plate styles. There was even a special rimfire (.22 and .32) version aimed at the young boys’ market. This had a modified rolling block action and was of take-down configuration. A figure of one quarter of a million is often quoted for this model alone, produced between 1902 and 1933.

Today’s fans of the Rolling block action may not have quite the same extensive choice as their nineteenth century counterparts, but the Pedersoli catalogue nevertheless offers a variety to suit all but the most fastidious enthusiast, with names like John Bodine, Silhouette and Mississippi. The model is offered in nine different calibres from .22LR rimfire to the mighty .45-90 centre fire, encompassing six barrel lengths, from a 20-inch carbine up to a couple of 34-inch giants, some with double set triggers. This is before you delve into the options, such as special sights and deluxe finishes, including engraving and gold inlay.

The model we have here is a full-size rifle chambered in what is often referred to as a ‘pistol calibre’, that is .357 magnum. In the case of this calibre, I feel that it is an accurate description, as the .357, along with the likes of .45 Colt, was introduced as a handgun cartridge. Others, such as .38/40 or .44/40 should not be classed as ‘pistol calibres’, as they began their lives with the Winchester Model 1873 rifle. Back to the gun.

At almost four feet long, with its 30-inch barrel and weighing a tad over ten and a half pounds, this is a big gun and, to get the best out of it, you really need a rest. It can be shot offhand but there is a lot of weight in front of that forearm, so a bit of support does not go amiss. The barrel is one of Pedersoli’s P.M.G. (Premium Match Grade) series and, on this smaller calibre, is cut with 8-groove rifling, while the bigger bores have 6-groove. Its centrally-mounted hammer and breech block mean that, viewed from either side, it has nice clean lines.

The forearm and straightgripped stock are plain walnut with an oiled finish and the butt is capped with a slightly curved plate, where many of the larger calibres have a flat and deeper plate. The butt plate, along with the receiver and trigger guard (two separate pieces), have a case coloured finish, while the rest of the metal is black with a reasonable gloss finish. The edges of the barrel flats are very slightly rounded and not as sharp as some I have seen. In the same vein, the wood to metal finish on this example falls ever so slightly short of Pedersoli’s usual excellence but this is probably just a bit of nit picking by me.

Sights are very basic, with the semi-buckhorn rear seen on a number of offerings, which is adjustable for both windage and elevation, and a large ‘shark fin’ front on a base dovetailed into the top barrel flat, this adjustable for windage. The top tang is drilled and tapped for the addition of an optional sight if you wish to improve the versatility of the gun. The strength of this action is such that even loads at the top end of the .357 magnum range will not trouble this rifle and those extra sights will no doubt prove to be an asset if you are trying to get maximum distance.

The rolling block action is both simple and strong and should give many years of service, with little or no maintenance other than regular cleaning. Should you wish to delve inside the mechanism, it is not a daunting task. Simply remove the screw from the left side of the receiver, lift off the bar holding the two cross pins and tap these out from the right side, allowing removal of the breech block and hammer. Further dismantling should not be necessary for cleaning but there are books available and videos on social media if you desire to dig a little deeper.

Loading is achieved by thumbing the hammer all the way back until it clicks into place and pulling back the breech block, which contains the floating firing pin, using the ‘ear’ on the right side. This exposes the breech and activates the extractor. There are no ‘clicks’ on the breech block and it moves very easily, which could cause some shooters to feel that it is a bit insecure, but lock-up on firing is as solid as it gets, thanks to the cam design of the mechanism. The breech block cannot move rearwards when the hammer is at rest in the fired position. Load the cartridge, close the breech block and you are ready to go.

The flat, smooth trigger is not too heavy and breaks cleanly with no creep. As can be imagined with the weight of this rifle, recoil is very minimal in this calibre, particularly with the fairly mild load I was using. This was 6½-grains of Bullseye, behind a 158-grain RNFP lead bullet. Fired cases are extracted rather than ejected and need to be removed with your fingers.

Sitting at a bench with a single shot rifle can be very relaxing and this is a gun you could shoot for extended periods. Once you get into a routine, your concentration may be such that you will be surprised to see your box of one hundred rounds almost empty. I have never owned a .357 magnum long gun and I could see that something like this could be preferable to another lever action model. For the range of available Pedersoli rolling blocks, check out the Henry Krank website.