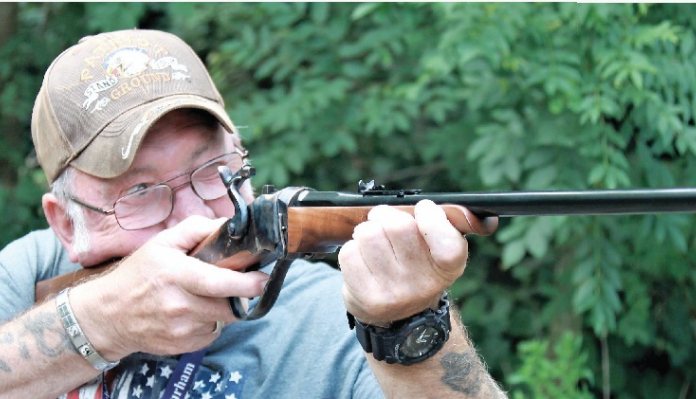 My first single shot rifle was a Pedersoli reproduction of the Remington Rolling Block action in .45/70. I liked the clean lines, centrally mounted hammer and simple action. That large hammer mounted on the side of the Sharp’s receiver looked rather ungainly and transferring the inertia from that hammer to a centrally placed firing pin seemed unnecessarily complex. They say that with age comes wisdom and I now have a Sharps reproduction rifle in my cabinet.

Despite being one of the better-known firearms manufacturers of the nineteenth century, personal information on Christian Sharps is rather sparse. He was born in Washington, New Jersey in 1810 or 1811, the exact date being uncertain, as all records for the parish were lost when the court house burnt down some years later. We next find him in the early 1830s working as an ‘apprentice’ at the Harper’s Ferry Arsenal in Virginia, at that time one of the major firearms manufacturing facilities in the United States. His years at Harper’s Ferry would allow him to not only observe and learn the various stages of manufacture and study the machinery used, but to witness the many experiments in small arms. He would doubtless have taken great interest in the trials of breechloading arms conducted there in 1837, which would give him an insight into the advantages and shortcomings of the various arms tested.

Some time later, he moved to Cincinnati, Ohio, where he spent several years, possibly living with his brother who was a steam engineer, working on his own breechloading rifle. He was granted a patent in September 1848 and the first work was contracted out to the company of A.S. Nippes in Mill Creek, Pennsylvania. Around 1851, production had moved to Windsor, Vermont, where his rifles were being manufactured by Robbins & Lawrence. A separate company, the Sharps Rifle Manufacturing Co., was established to promote and sell the arms in Hartford, Connecticut, where Sharps acted as technical advisor and was paid a royalty on each arm produced. Development of the rifle continued over the next couple of decades, culminating in the excellent Model 1874 (actually produced from 1871), although Sharps himself ended his association with the company in 1853/54 to begin a new venture, C. Sharps & Co.

Whilst the name ‘Sharps’ will usually be associated with single shot rifles, his new undertaking was primarily concerned with the manufacture of handguns, initially in the form of a percussion breechloader, which was essentially a miniature version of the rifle mechanism. It is estimated that less than 1000 of these were produced before the next model was introduced, a .25 calibre, 6-shot percussion revolver, not unlike the Smith & Wesson .22 rimfire revolver in appearance. However, it was his entry into the cartridge derringer market that gave the market large numbers of Sharps handguns, in the form of four-shot ‘pepperboxes’ as they were sometimes known. There were four basic models, offered in .22, .30 and .32 short and long rimfire, in each case with the barrel cluster sliding forward to load. A brief (1862-1866) partnership with William Hankins produced a number of these derringers, along with a .52 rimfire breechloading carbine and rifle. When the Sharps & Hankins venture closed, Christian reverted to C. Sharps & Co. and the company closed when he died in 1874.

I think it is fair to say that the majority of today’s reproduction Sharps rifles are based on the original Model 1874 and its derivatives, although there are some percussion breechloaders around. Although the nineteenth century Model 1874 was not produced in vast quantities (there are undoubtedly many more reproductions around) this rifle probably more than any other is associated with the Sharps name. Calibres ranged from .40-70 to .50-70 centrefire, with a number of .44 and .45 chamberings in between. The choice of barrel length and weight, stocks and sights mean that there is an infinite number of variations available among the original guns and today’s reproduction makers also offer a selection to suit most tastes. Today’s guns include a number of small calibre centrefire models, along with a few rimfires.

The Small Game model that we have here is a slightly scaled down version of the large centre fire rifles and at first glance looks tiny compared to some of those with a long and heavy barrel. However, at a shade over fortyone inches long and tipping the scales at a mere 7.6lbs, the rifle is nicely balanced and is one that you could comfortably shoot for extended periods. The first couple of inches at the breech end of the barrel are octagonal, from which the round profile tapers gradually towards the muzzle. The finish is a semi-gloss black and the muzzle is flat with a very slight chamfer at the bore. The rear sight, adjustable for elevation and windage, is a semi-buckhorn arrangement, the base of which is dovetailed into the barrel and fitted with a locking screw. The front sight, also adjustable for windage, is a tapered post fitted with a brass bead. The combination provides a very good sight picture, but I found that the set-up worked better for me outdoors than under artificial light. The top tang is drilled and tapped to take an optional long-range sight, several which are included in the Pedersoli catalogue.

The majority of the rest of the metalwork exhibits some fairly pleasing, if somewhat dark, case colours. The straight grained walnut stock appears to have an oiled finish and has a Schnabeltype forearm. All edges are nice and clean and wood to metal fit is very good throughout.

The trigger guard/operating lever is held in place by a catch and button arrangement set in the bottom tang. Depressing the button while pushing the catch forward locks the lever and pulling straight back on the catch releases it. Given the strength of the spring on this model, the catch seems rather unnecessary, as there is no way that this lever is going to drop down on its own. The locking catches were most commonly found on the early percussion model originals.

One of the first things that I noticed on unpacking this rifle, is that one of the screw tips showing through the right-side plate is white i.e. it has not been blued. Looking back through photographs of earlier Pedersoli reviews, I find that this is very common on guns with lock plates; so, it is obviously not just an oversight. It seems to be one of the internal screws in the lock itself, so perhaps there is a simple logical answer.

Length of pull on this gun is 14-inches, which I found to be just about perfect. The butt plate is slightly curved, but not as severe as some of the larger calibres and is very comfortable given that there is almost no recoil.

Dropping the lever again to the perpendicular position you will find that the empty case is still in the breech. You need to push the lever forward against the spring to extract the case. The case is not ejected and will have to be pulled out by hand. It does not take long to get into a routine and you may be surprised at how quickly you can get through ammunition with a single shot rifle. I found it almost impossible to chamber Remington ammunition but the CCI standard and Minimag worked without a problem.

With the hammer at rest, the wide, flat trigger seems a little loose but in use it breaks cleanly without any creep. With target ammunition, a competent shooter would doubtless make this rifle sing but, as a fun shooter, I was happy to consistently take out plastic bottle tops at 25- yards. The breech area was still clean after some two hundred rounds and a couple of runs through the barrel with a bore snake got that back to pristine condition.

A look through current price lists will show you that there are no ‘cheap’ guns any more, but for your money here you are getting Pedersoli quality. If you like the Sharps mechanism and do not want to shoot the big bore guns, or maybe do not have access to outdoor ranges, then the Pedersoli Small Game rifle might just fit the bill.