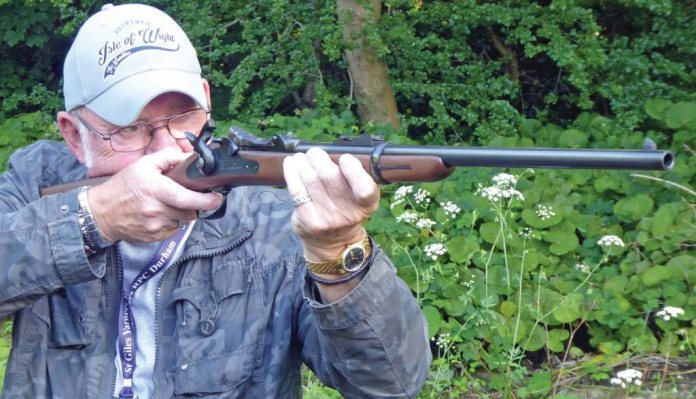 The events of that fateful day in June 1876 have been discussed ever since and will continue to be far into the future. Blame for the defeat of the United States 7th Cavalry has been laid at the door of Custer himself, the Springfield rifle, poor ammunition, troops that were not combatready and the sheer overwhelming number of Indians. The truth probably lies in a combination of all factors, although the real truth of what happened on Last Stand Hill will never be known.

At the close of the Civil War, the US Army had thousands of muzzle-loading rifles, and by 1865 it was realised that breech loaders were the way forward. A cash-strapped Union was in no position to furnish new weapons to every soldier but a solution came in the form of Erskine Allin’s design to convert the muzzle-loading rifles by simply replacing the breech portion of the barrel with a new section incorporating a ‘trapdoor’. Early conversions were .50 calibre, both rimfire and centrefire, but by 1873 the Army had decided to standardise small arms at .45 calibre. This resulted in the .45 Colt cartridge for revolvers and the .45-70 for long guns.

Several manufacturers submitted rifles for testing and the final decision of the Army Ordnance Board favoured the Allin conversion, not least because the Armoury was already geared up to produce this type, but also because it was deemed at least as strong, if not stronger, than the opposition. It’s also a very simple system to operate, a feature taken into account when issuing to raw recruits.

The one shortcoming with the trapdoor mechanism, jamming of the extractor, was known to the testing board but a failure rate of 1-in-300 was not considered a major deficiency. Later archaeological examination of the battlefield would suggest that this failure rate could be nearer to 1-in-30. The copper-cased ammunition is often cited as a contributory factor in these failures, where the case head could be torn off during extraction.

While the .45-70 cartridge – with its 70-grains of black powder – was used for the infantry rifle with its 32½” barrel, a lighter powder charge of 55-grains (.45- 55) was used in ammunition for the carbine, which was issued to mounted troops.

My first impression of the Springfield Carbine is of a plainlooking rifle that places function above form. The one-piece walnut stock is plain with a satin finish that looks to be oiled. The breech block, or trapdoor, is case coloured with the rest of the metal being gloss black, with one exception. The 22” tapered barrel and receiver are fastened to the stock with a screw in the top tang and a band just in front of the rear sight. This band is held in place by a spring with a purple hue to it, which is not as strong as some that I have encountered, and the front band was easily removed when the need unexpectedly arose.

As per the originals, the trigger guard has a broad base and instead of being cast in unison with the bottom tang, is a separate entity that’s fastened by two screws entering the ‘legs’ of the guard from inside the tang.

The left side of the stock has a bar and ring arrangement and when the carbine was not carried in a leather boot to the side to the saddle, this would be used to attach a sprung clip, which in turn was fastened to a leather strap. The whole ensemble would be worn over the trooper’s shoulder and across his chest, an arrangement that I imagine would be cumbersome and uncomfortable.

The action on the Trapdoor is not the strongest of the big singleshot rifles but is a pleasure to use. The large percussion era hammer has four positions including the ‘at rest’ position when the gun has been fired. The first click is a ‘safety’ notch and at this position, the trapdoor cannot be opened, the second is half-cock and the third full-cock. To load the gun, the hammer should be put in the half-cock position so that you can lift the spring-loaded lever on the right side of the block and thus open it up to expose the breech. Slip in a cartridge and press the block down and it will snap shut. Pull the hammer back to full-cock and you are ready to go. The two-piece firing pin is located inside the breech block and strikes the primer at a slight angle rather than straight-on, but performed faultlessly throughout.

To unload, repeat steps one and two and as the breech block reaches the end of its travel it engages with a spur, which is the upper part of the spring-loaded ejector. This shares the same hinge as the trapdoor, and this flips the empty case backwards when activated. At the rear end of the breech floor is a stud and when the case hits this it is flipped out of the action. When the trapdoor is closed for the next shot the extractor is pushed back into place. It was said that a well-trained soldier could put three shots a minute on target with the Springfield.

Sights are very much true to the originals, with the rear being a tip-up ladder set in a stepped, winged base, the latter being fixed to the barrel with two screws. The steps are graduated 1 to 5 on the right wing, while the ladder is marked from 6 to 12. A strong spring holds the ladder firmly in place when raised. The one-piece front sight is a blade sat atop a block that is soldered to the barrel. There is no lateral adjustment on either sight. A shallow groove is cut into the front on the breech block and the top of the receiver to permit you to see the rear sight’s v-notch when at its lowest setting.

Having a single-shot rifle of my own in this calibre, I always have some reloaded ammunition on hand, usually in two or three load variations, but generally using the same 405-grain, lead RNFP bullet. A light load of 12-grains of Trail Boss powder is adequate for a bit of plinking, but first up for this test was a load of 30-grains of IMR 4198 powder. Recoil was fairly mild and the bullet was going where it was pointed more often than not if I did my part.

Mindful of the history of this carbine, it would have been amiss of me not to try some black powder loads. Unfortunately, all I had on hand was some Henry Krank fine powder, when I would have preferred their medium grade. Still, this action was designed for loads of 70-grains, so I figured that the carbine load of 55-grains would be OK, albeit with the fine powder, and loaded 20 cartridges. I only got to shoot five as after the fifth shot the trapdoor would not open. The spring-loaded catch was moving but the trapdoor was not budging.

Back on the workbench the barrel and receiver were taken out of the stock and I tapped the breech block hinge pin out. The trapdoor remained stuck, but a light tap on its rear with a small hammer and length of wood dowel did the trick. When the bits came out, the fired case remained in the breech and needed another tap with a ramrod to free it. Everything seemed fine so I cleaned it and set about putting it back together. It was then that I learned you need at least three hands to hold the extractor against its spring while you try to locate the hinge pin! After 10 minutes of struggling, I called for help, with the consequence that my wife thinks she should now have ‘Apprentice Gunsmith’ added to her CV. The mechanism was reassembled and everything worked as it should. Puzzled, I contacted Pedersoli and all they could come up with was that the fine powder may have generated a bit too much pressure.

It would be a further month before there was a rifle shoot at my outdoor club but then I got an unexpected chance to visit another range, so off I went, albeit a little apprehensively. With a light load of 13-grains of Trail Boss behind the 405-grain bullet, the gun worked perfectly, so I went back to the IMR powder with the same bullet. 60 or so shots later, without a hitch, I figured there was no longer a problem and the gun was working exactly as it should. For good measure, I fired the rest of the 100 rounds I had brought with me. The trapdoor action is still one of my favourites and unless the Pedersoli opinion is correct, I am at a loss to explain the initial problem.

There are another couple of variations of this gun available, so check out the Henry Krank catalogue or website for more details.