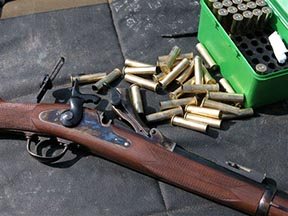 Over this last year I seem to have more than just a technical interest in some of the guns that have landed on my desk. Recently I tested Pedersoli’s John Bodine Rolling Block BPCR and I have to say that I really enjoyed myself and would certainly consider having a go at Quigley or something similar again. This month it’s the turn of a classic and rather unusual BPCR that I can honestly say I know inside out, as I owned and shot one over three years.

The Officer’s Model is no ordinary Trapdoor and as the name suggests it was intended to be a private purchase by officers of the US Cavalry, as opposed to an issue firearm like the Cavalry Carbine and full length Infantry Rifle. The idea was a hunting gun that was chambered for the Service cartridge (45-70 Government) that could be taken on campaign and at a pinch used to fight with. History tells us that Tom Custer (George Custer’s younger brother) carried an OM at the Little Big Horn.

The OM is very much an intermediate design, sitting as it does with its 26” barrel between the 22” Cavalry carbine and the 32” Infantry rifle. It differs considerably from these two pure Service guns by its sighting systems and accessories and to me strikes a nice balance between handling and shootability, not often found in reproduction guns of this period. However, in comparison with the Sharps and Remington Rolling Block BPCRs, which we in the UK are most familiar with, the OM does have its limitations…

Pedersoli have changed the OM a little since I owned one, with the addition of a barrel-mounted step/ladder rear sight and a change from a German silver end cap to a colour casehardened version. This time round I took the opportunity to borrow a few accessories to see if they offered any real improvement to performance.

From the box the OM comes with a straight-hand walnut stock, which is chequered at the wrist and forend. The barrel and hammer are blued with the lock plate, breechblock, nose cap, barrel band and butt plate colour case hardened. Underneath the barrel is a cleaning rod that slides into the forend and is held by a ferrule. Regrettably Pedersoli don’t include a set of brushes or jags with it. Sights consist of a tall/brass-tipped front blade and a flip-up, friction tang on the wrist of the stock. The barrel-mounted unit is of the Service pattern and offers step elevator V-notch from 100 – 400 yards and a flip-up ladder with sliding notch from 500-1100. This last distance is a little ambitious for a rifle of this type. This new addition to the sighting system does make the rifle good for short-range use. Certainly in comparison to my example, where you had to live with the rear tang or get something else fitted on.

The OM’s tang sight is pretty faithful to the original, which is nice for the purists but bloody annoying for shooters. Unlike the more sophisticated BCPR sights, like Pedersoli’s USA 430 and 431, this one does not use a micrometer adjuster to set elevation and windage. Instead the eyepiece is locked by friction and unscrewed then moved up/down, left/right, then re-tightened. Sounds good, but with no marking on the slider it’s very hard to adjust and even harder to return to a setting. Before I moved onto a Sharps for Quigley events I took the standard tang sight off and fitted a more sophisticated unit, which to a degree solved these problems.

Operating the Trapdoor is simple – just in front of the hammer is a latch, which pulls up to unlock the breech block, which swings up and over the barrel. This exposes the chamber and loading trough. To load pull the hammer back one click (half-cock) open the breech and slide a round into the chamber and with the muzzle pointing slightly down (to retain the cartridge) close the breech.

Then pull then hammer back to full cock (second click) and you’re ready to go. Unlike the Cavalry and Infantry guns the OM offers the user a single set trigger, which is pushed forward to set. Once fired repeat the opening process and this time the empty case will be flicked out of the chamber to strike the ejector stud in the barrel trough and be kicked out of the action. In comparison to my old OM, this new one needs less effort to do this job but ejection is not as positive.

The trigger pull was very good in both standard and set mode, the former gave a crisp 3lbs and the latter a scary sub-1lb, which can be adjusted via a screw at the rear of the blade, and it needed to be adjusted as this is just too light for any really consistent shot release. As I’ve said before about these types of mechanism – it’s a definite case of touch and go!

As I initially used my OM for short-range fun shooting, then moved it on to more competitive stuff like Quigley, I soon realised that the sights would have to be improved. I have already mentioned what I did to the rear unit; up front I binned the blade and fitted a tunnel with interchangeable elements, and these mods made the rifle far more competitive.

This time round I decided to see what Pedersoli had to offer in terms of authentic accessories. The real OM did not come with a fixed blade front sight but a blade & globe unit instead, and this is available. This consists of a brass ring with a steel post inside. When folded down a blade is then presented, much in the manner of an L-flip sight. Being set in a dovetail it’s windage adjustable, which is a bonus.

I found that with this dual role system you could make far better use of the rather primitive tang sight. For short range work the blade and the barrel-mounted unit set at 300 gave me a dead on aim point, obviously after some windage correction. If I wanted more precision I flipped up the globe and used the tang sight, which I set for a 300-yard zero, which with this equipment is probably the effective working range. As can be seen, with a bit of experimentation this is quite a flexible set-up. As the tang can be folded down and is reasonably unobtrusive in this way, unlike the bigger USA 431, shooting it does not detract from your firing handgrip or general shootability. One thing though; the tang needs to be folded rearwards, if not the aperture drum can foul the hammer as it’s pulled back to full cock.

To further improve things I also fitted the optional pistol grip. The original OM offered a cast brass grip that clipped onto the trigger guard. Pedersoli have opted for a wooden style that fits using an elongated stock screw. This gives a far better grip angle and fills the hand nicely too.

One big consideration with the OM, and certainly the Cavalry Carbine, is ammunition, which these days (with very few exceptions) needs to be hand-loaded. These are by far the lightest of the BPCRs, when compared to the heavier Sharps and Rolling Blocks, which usually tip the scale at about 10-11 lbs. For long-range work a minimum of a 500-grain bullet is considered best, which is a not an inconsiderable load.

However, the OM is a punishing rifle to shoot with these heavy loads; believe me I’ve been there and 32-grains of H4198 under a 500-grain Silhouette bullet really beats you up after 40 rounds plus some sighters. This was true back in the 1880s too, as the Cavalry Carbine was issued with a reduced load and bullet (50-grains of Blackpowder and a 405-grain bullet) to alleviate this problem (as opposed to the 70-grain charge and 500-grain bullet of the Infantry Rifle.) So my advice, which was passed onto me by more experienced Classic shooters, is to keep it sensible, and a charge of between 25-27 grains of H4198 and a hard-cast 405-grain bullet shoots well enough and will not turn your shoulder into jelly either.

Reloading for the 45-70 is not that expensive and I turned to Henry Krank & Co for components and equipment. They kindly supplied me with 50 Star-Line cases, a box of their hard-cast 405-grain, flat-nose lead bullets a set of Lee dies and some Pedersoli felt wads.

The 45-70 is just a big straight-walled rimmed case so loads easily. Use a standard Large Rifle primer and start at 25-grains of H4198. This is not a big charge, hence the use of the .45” calibre felt wad, to take up internal space. This does improve consistency no end. I would advise against a card wad, as they can cause chamber ringing by creating pressure points in the case as the powder ignites.

Using the tang and globe at 100-yards the OM was capable of printing 1.5-2” without any problems, which is not bad at all - doubtless with something with a bit more finesse it could be improved upon. The truth is with BPCRs that once you have perfected your load then it’s all about the quality/sophistication of your sighting system and your ability to use it.

Categorising the Officer’s Model is not easy. It’s a nice rifle in its own right, accurate and with the right loads highly shootable. However, its lightweight and short barrel do put it at a distinctive disadvantage for longer range work, in terms of effectiveness and general shootability. In the early days of Quigley I did well with mine, and with better sights fitted I often placed in the top three with it. I thought that this was more down to the inexperience of other shooters with Sharps et al, than the ability of the OM… However, this was with 500-grain loads, which are punishing in this gun. I soon moved onto a Sharps Silhouette and both my scores and performance improved and I did not feel like I’d been beaten up after a competition either.

I think for those who want a short range and lightweight BPCR that’s both fun and easy to shoot, with good accuracy potential then the OM is a good bet. Plus it’s unique in comparison to the other choices out there, which is never a bad thing. But for the more serious business of 600-yards + then a heavier/longer gun like the Sharps or Rolling Block is by far the better choice.