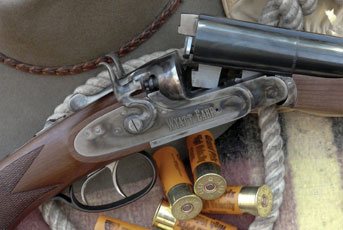 It’s now been a couple of years since I enjoyed a day’s Cowboy Action Shooting, as much a social occasion as it was a day spent shooting authentic replica firearms. But whilst the day was thoroughly enjoyable one of the almost universal comments was the struggle most of those present had when it came to acquiring a genuine ‘period’ external hammer 12 bore. Yes, they were to be had second-hand but often in poor condition whilst modern versions were becoming difficult to find.

Cowboy Action Shooters please take note; Davide Pedersoli has now solved all your smoothbore problems in the shape of ‘Wyatt Earp’. A genuine recreation of the Wild West side-by-side 12 bore, this Section 1 shotgun is authentic as they get to a degree that when I tested it I had an overwhelming urge to fit a pair of spurs to my boots… But before we find out what it’s like to shoot, it might be an idea to take a look back in time and find out exactly why this style of shotgun came into being along with a few facts about the man himself, Wyatt Earp one of the most famous names in frontier folklore.

As the American west opened up so did the demand for a good, usable all round gun, the shotgun being an obvious choice. However, whilst the honest, law abiding folks used them for their intended use, various outlaws such as Charles Boles aka ‘Black Bart’ used a short-barrelled or sawn-off shotgun as the perfect tool for his twenty-eight stagecoach hold up’s. However, whilst ‘Bart’ was eventually jailed the stagecoach remained an easy and often lucrative target, numerous occupants cramped in a small space along with the probability that they could be carrying all their worldly possessions, it got to the point where the driver’s mate or guard was usually issued with the exact same fast handling, devastatingly effective, close-up weapon asthe bandits - namely a sawnoff shotgun.

So popular was the design that many well known American manufacturers along with our very own WW Greener eventually included a ‘Coach Gun’ in their catalogues.  Numerous famous characters became owners, such as Wyatt Earp and his brothers Virgil and Morgan along with John H. ‘Doc’ Holliday (his own shotgun boasting 12” barrels) exemplifying the use of this type shotgun along with the synonymous six-shot revolvers. They were used in the infamous ‘Gunfight at the OK Corral’ and whilst the actual shoot-out took around a minute, the name of Wyatt Earp became engraved in frontier history until he died at the age of 80 on 13th January, 1929. But whilst the rosy glow of history kindly overlooks the man’s often colourful and at times less than reputable past as a gambler, buffalo hunter, saloon keeper, gold and copper miner and barber, along with his stints behind bars, if you’re going to engrave the name of a Wild West legend down the side of a faithful reproduction, you won’t go far wrong with Wyatt Earp.

Renowned for their abilities to recreate weapons of the Wild West, Pedersoli’s ‘Wyatt Earp’ looks right the moment you open the box. This is a short barrelled version of Pedersoli’sLa Bohemienne 12 bore hammer game gun, both guns sharing the same, rebounding hammer action.

This is a no frills shotgun with a smooth, wide, Anson type latched Beaver style forend almost enveloping the short, gloss blacked 20” chopper lump barrels. A small brass bead sits just above the ¼ and ¼ choked muzzles whilst the 5 – 7mm perfectly smooth tapering rib extends into a securing slot cut into the top of the standing breech.

The seven-pin action is defined by a light colour case hardened finish, the blues and browns extending down the entire length of the sidelocks, all around the fences, the base of the action, top tang, sliding manual safety-catch, top-lever and the scrolled shaped hammers, even the checked hatching atop each spur benefiting from the effect. Apart from the gloss black trigger guard and the chromed trigger blades the only other ornamentation is the gun’s name, the words ‘Wyatt Earp’ engraved in western style script along the right-hand side of the action.

Do please note though that whilst the safety prevents the hammers from being released and striking the firing pins, it still allows the Earp to be opened and the hammers to be cocked. My advice being to load the gun and cock each individual hammer just prior to firing. One point of note is the rebounding hammers or should I say more of an explanation. Some hammer guns re – cock the hammers when the gun is opened just as a hammerless shotgun does. The term rebounding refers to the fact that once the hammer has fallen and struck the firing pin, it then rebounds about 1/8” so it stand un-cocked but away from the firing pin.

All that remains is the grip and stock, the rounded pommel grip the only part of the semi-oiled furniture that features checkering; a large, fine diamond cut panel on each side. The well-proportioned game style stock is finished off with a period correct metal buttplate, inlet at the heel to facilitate a smooth, drag free mount. Whilst being a simple design, the components have come together to form one of the most visually entertaining wholes you’re likely to see, the gun testament to just how well Pedersoli do what they do and why their reproduction firearms are as sought after as they are.

The first thing you notice as soon as you heft the gun to the shoulder is that for what it is, the dimensions are better than many supposed game guns, whilst a moment or two with the Arrow Laser Shot confirmed that the Earp’s attitude was seriously flat.

Whilst the overall weight and length might be nothing more than 6lbs 6oz and 37 7/16” the stock gives the shooter a good 14¾” length of pull to the front trigger with drops at comb and heel of 1 7/16” and 2 3/8”. If there is a noticeable downside it’s the trigger weight, the front breaking at 9lbs 6oz, the rear an even greater heave at 9lbs 10oz. Surprisingly though, once you’ve got used to them, the triggers don’t seem anywhere near as heavy to break as they first seem, your unconscious self seemingly taking over as the sheer pleasure of shooting the Earp comes into play.

Loading up with 28g Eley VIP Sporting Fibres filled with 7½’s, an impromptu round of improvised skeet along with a few overhead clays thrown in for good measure highlighted just how fast, quick handling and well balanced the Earp actually is. Even with chokes as wide as the factory has chosen, the pattern quality and evenness of spread is excellent, this little 12 bore as effective as many a purpose built shotgun. Even the fact that you have to remove the spent cases yourself adds to the experience, whilst the satisfying click as each of the rebounding hammers locks into cocked is an audible as well as a physical confirmation.

A change of pace onto Cowboy Action targets once again reaffirmed that Pedersoli has got this short barrelled shotgun exactly right. With a series of static clay targets affixed to posts at distances from eight to twenty feet away, eliminating six ‘Bad Guys’ in less than forty seconds was more than possible. The fact I repeated the exercise six times was a case of intense testing and evaluation on the readers’ and nothing whatsoever to do with the fact it was a hell of a way to burn up a box of cartridges.

One of the Earp’s main problems is that apart from Cowboy Action you’re somewhat restricted in where you can use it. Mostclay grounds tend not to be covered for the use of Section 1 firearms of which this gun most definitely is.

Unless you can justify having use of the Wyatt Earp, getting a space on your ticket could prove time consuming. That said, for what it costs, the fact it’s an absolute gem to shoot, the patterning excellent, a genuinely interesting addition to any shotgunner’s collection and the weapon that could well start your fascination with shooting ‘Old West’ style, then £1,015 isn’t a bad price.

Likewise, even though the Earp is chambered for modern ammunition, an occasional box of black powder loads really does add some flame and smoke to the proceedings. The downside is that you’ll have to invest in some of Henry Krank’s Brunox cleaning gear and a lot of boiling water to flush out the residue from the barrels. The Earp is well made, authentic whilst being one of the fastest handling 12 bores you’re likely to pick up.