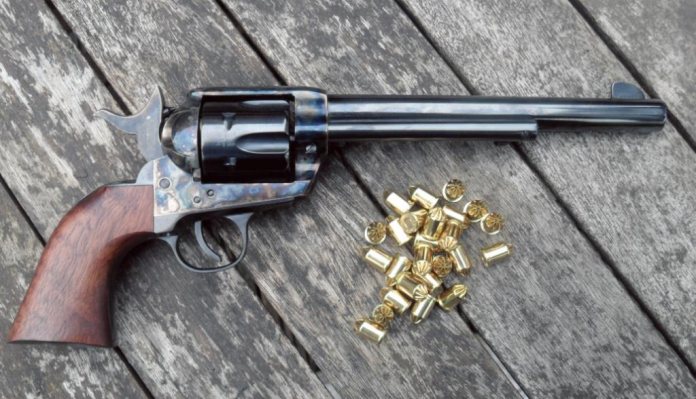 Back in the day I owned several handguns, many of which were revolvers, and as well as being great to shoot they were all fine pieces of engineering. In common with most shooters I appreciated the skill and work that goes into making a ‘wheelgun’. There were also copies of many of the popular firearms available, mostly blank firers, and I remember being very unimpressed with their quality, weight and feel. They were not at all realistic and they were manufactured as cheap ‘toys’ rather than as accurate replicas. As I recently discovered however, things have changed a lot since then thanks to a company called Pietta.

Based in Italy, Pietta are, of course, best known for their reproductions of historical weapons, real firearms requiring a firearms licence in order to possess them. They have been making guns for decades and have established a reputation for quality and reliability. The quality of their firearms is amongst the best in the market and so it might seem a dangerous step for them to risk that reputation by making blank firers. What they have done, in order to ensure their reputation for quality remains untarnished, is to produce a line of very high-quality reproduction blank firing revolvers.

On Test is the Pietta 1873 single action 7½-inch cavalry blank firer. When you take it out of the box the high-quality of the gun is immediately apparent, with a case-hardened frame and hammer, walnut grip and a deep blued finish on the remaining visible metal parts it is truly handsome! Not a term I would normally use to describe a gun, but this one justifies such a generous adjective. It looks and feels very much like a real firearm. The revolver is also available with a 4¾- and a 5½-inch barrel, but the longer barrel on the test gun seems to give it a perfect balance and feel. The gun feels incredibly good in the hand, with the weight being very close to that of a real handgun and you can’t help but keep picking it up.

The revolver fires .380 calibre blanks and these are loaded one at a time using the loading gate on the right-hand side of the gun, behind the cylinder. With the hammer at the half-cock position the gate is swung open and the cylinder is rotated to expose each chamber in turn for a blank to be inserted. Once all six blanks are loaded the gate is swung to the closed position, the hammer is carefully de-cocked, and the gun is ready to fire. True to the original version, the gun is single action only, requiring the hammer to be fully cocked before firing each shot. With the hammer fully cocked the rear sight notch is visible in the top of the frame. The trigger is very good, albeit with a little creep which has to be taken up before firing and is probably much better than it would have been on the original 1873s. To eject the fired blanks the loading gate is opened in the same way as for loading. Each chamber is then lined up with the ejector rod located underneath the barrel and pushed out using the finger lug on the forward end of the rod.

Although the .380 calibre blanks are very small, the noise they generate is not! So be warned, they are not suitable for discharging in a normal domestic environment. They are only suitable for use is appropriate locations and hearing protection is definitely recommended. The guns are side venting, which means that the blast from the blanks vents sideways just in front of the cylinder, so proper handing should be observed so that nothing you might want to keep gets too close to this area when the gun is fired.

Down on the range

Firing the gun is just plain fun, it is that well made, and functions so well, it is just a joy to use. It may be that it takes you back to the days when we could own and shoot real pistols, or it could be down to the fact that using such a nice piece of kit is a pleasure in itself. Much like the guys who make miniature steam engines and the like, just because they can, these revolvers are far more than just a toy and handling one is very enjoyable. As well as firing single action, cocking and firing one round at a time, it is possible to hold the trigger back with one hand and ‘fan’ the hammer with the other. This technique completely bypasses the trigger mechanism and each time the hammer is fanned the cylinder rotates and the gun fires. This is how the cowboys in the films were able to achieve rapid fire with a single action revolver, great fun! A box of 50 blanks was quickly used up testing the gun and it functioned flawlessly each and every time.

Having used one of these fine revolvers I can very much see them appealing to a variety of people. For anyone who takes part in cowboy re-enactment activities they are ideal, being both an accurate reproduction of a gun of the period, and a functioning revolver. If you appreciate guns for their engineering, quality and looks then the Pietta blank firers would make a great addition to any collection. They also make a great conversation piece and will appeal to anyone who misses owning a real revolver and wants a reminder of those great days. Henry Kranks carry a large range of blank firers, all of which can be seen on their website, and they are all available without the need for any licence, you must however be over 18 years of age. Who wants one, well to be honest, I do.