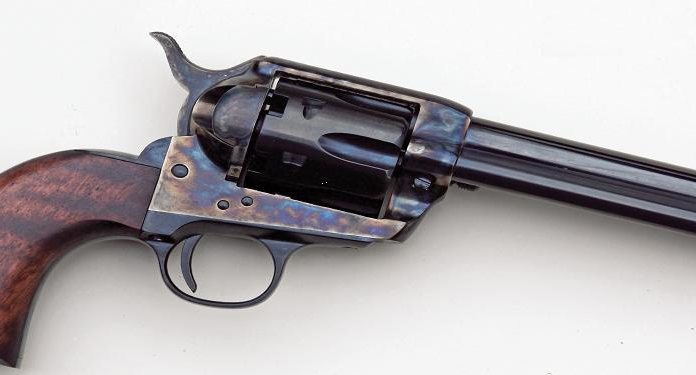 I can think of three handguns that just about every male in the western world who ever went to the movies – whether gun fancier or not – would recognise instantly. Firstly, the German Luger pistol, used by the ‘bad guys’ in countless War films and brandished by many a gangster villain.

Secondly, the Colt Model 1911 pistol, often referred to as the ‘Colt automatic’ on screen, and carried by just about every GI in the silver screen’s coverage of two World Wars. Finally, we have what is probably the most recognised firearm throughout the World, the Colt SAA revolver; staple fodder in countless Western films over many decades.

Used by cowboys, outlaws, lawmen and the US cavalry and just about anyone else who had a use for a gun, this iconic revolver has made an appearance in every Western that has ever been made since Broncho Billy Anderson’s ‘The Great Train Robbery’ in 1903. In the early days, original Colt examples were used but since the advent of the Italian reproduction arms industry, the tendency has been to use the products made by Pietta and Uberti.

After 25-years (excluding the failed Paterson venture) of successfully producing percussion revolvers to satisfy both the civilian market and the Union Army during the majority of the Civil War years, Colt entered a breech-loading revolver into the Army trials of 1871. After the expiry of the Rollin White patent in 1869, production of revolvers with bored through cylinders that could be loaded with cartridges from the rear was open to all. Colt found themselves with thousands of their open framed percussion revolvers on hand so many of these were converted to breechloaders.

Colt’s first submission to the testing board was a purpose built cartridge revolver based on their 1860 percussion model and chambered in .44 calibre. But the Army required a .45 calibre pistol with a closed frame, so the design team set to work and came up with the ageless Peacemaker, a name that was never actually used by Colt to describe this pistol.

Using the mechanics from their percussion models and the grip and lower frame design from the 1851 Navy revolver, the new model passed all of the Army tests with flying colours and was adopted as the standard sidearm for the cavalry in 1873.

Apart from a 10-year break after World War II and a couple of short interruptions to renew machinery, the SAA revolver has been in Colt’s catalogue ever since, the only real change from serial number 1 being the method for holding the cylinder arbour in place. It has been offered in well over thirty different calibres from .22-inch rimfire to .476-inch centre fire and with barrel lengths from two-inches to whatever the customer required.

It is by far the most popular revolver among Western shooters but sadly, since 1997, has been unavailable to UK shooters, unless you want one with an abnormally long barrel or a coat hanger welded on to the butt. I’m not sure who takes the credit for designing this percussion version but it has given fans of the old hogleg a new and different opportunity to feel the power of the revolver, sometimes described (wrongly, I feel) as “the gun that won the West”.

I was not a fan of these when they were introduced some years ago but there is no escaping the feeling when you hold it in your hand and hear those four clicks as you cock the hammer. It says only one thing: C-O-L-T.

There have been many clones of the cartridge SAA over the last five or six decades, with the more popular versions coming from Italy. We now have two Italian manufacturers to thank for bringing us the percussion versions, one of which is Pietta. Long renowned for their reproductions of Western guns, Pietta have made an excellent job of creating this muzzle-loading version. Of the three standard barrel lengths – 4½, 5½ and 7½-inches – this middle of the range is my favourite. It looks and feels just perfect.

The frame and hammer are case coloured and the rest of the metalwork is black. Case colours on reproductions can vary quite a lot and this one shows very deep colours and along with the oiled walnut grips the overall appearance is a very dark gun. All edges are clean, without being over sharp and the grips are a particularly nice fit. Sights are very basic, being a square groove milled into the top strap for a rear and the front is a blade soldered to the barrel, on this example tilted ever so slightly so the left. The knurling on the hammer spur is enough to give a good purchase without being too sharp. The firing pin from the cartridge versions has been replaced by a much more blunt affair needed to detonate the percussion caps and the nipples are bored slightly off-centre in each chamber of the cylinder.

The rear of the cylinder is cut with what I assume are supposed to be safety notches between each nipple, but the nose of the hammer does not fit into these, possibly because it is a shade too wide. Lock up is very tight and the timing is excellent, something that I have begun to expect from today’s Italian reproduction revolvers.

The ejector rod and its tube have, rightly so, been retained on the right side of the barrel, as one cannot imagine this pistol without them, although they serve no purpose on this model. The lack of a rammer means that the cylinder has to be removed from the frame for loading and a small tool is offered as an option for this purpose. Getting the cylinder pin out of the frame proved extremely difficult at the first couple of attempts and the problem turned out to be a slight burr at the end of the pin, which made it a tight fit in the recoil shield. A little judicious work with some fine emery cloth and a touch up with cold blue made all the difference.

Once the cylinder is placed on the tool then the total time taken to load six chambers is very little different to using a normal percussion revolver with a rammer attached, as all six chambers can be charged with powder and then the six balls put in place and rammed home in as many seconds. I chose to insert a homemade ‘grease cookie’ between ball and powder for two reasons.

One, it acts as a lubricant to keep barrel fouling soft and is also serves as a ‘belt and braces’ safeguard against a chain fire. Although Colt’s original loading instructions said that this was not necessary if using the correct size ball, I feel that for the cost involved and the time added to the loading process, it’s a worthwhile operation for peace of mind. As with the vast majority of black powder revolvers, fouling will build-up around the arbour at the front of the cylinder and eventually cause difficulty in cocking, although it was less than anticipated with this model. It is prudent while you have the cylinder removed for loading to give the arbour a quick wipe over and every three or four loads run a mop through the centre of the cylinder to relieve this problem.

Where this revolver, along with clones of the Remington 1858, scores over other Colt percussion models is in having a closed frame, which prevents the spent or broken caps from falling into the action. It is obviously a little easier to cap the cylinder while it is removed from the gun but for safety’s sake I would say it’s wiser to do it after the cylinder has been replaced. A dropped, capped cylinder might possibly cause your eyes to water!

The pistol has all of the obligatory Italian markings but I did notice one omission – there is no reproduction of the Colt patent dates on the left side of the frame. This feature is present on the offering of this revolver from Uberti and was also evident on the old cartridge versions from Armi San Marco. Obviously this has no effect on the operation of the gun but I think that it’s a nice touch to have them present, and I don’t think that it would cause any problems with Colt. How about it, Alessandro?

Mechanically, this pistol differs slightly from the Colt version in that the flat hand spring of the American version has been replaced by a small coil spring. A hole is drilled into the back of the frame and a small ‘button’ and the spring inserted, the ensemble being held in place when the back strap is attached. This is an improvement over the original design in which the spring was prone to breakage.

Just be careful when you strip the revolver that these tiny parts do not disappear! Twenty grains of Henry Krank fine black powder was loaded behind a grease cookie and a .454-inch lead ball. Ignition was by Remington number 11 percussion caps. There is very little difference between shooting this revolver and its cartridge counterpart but you will notice a marked loss of visibility from the cloud of smoke! Keeping six rapid shots on the target can be a challenge. Recoil is a shade less than say, a .45 Colt, so is easily manageable. This pistol printed three or four inches low at 25-metres, so a little experimentation would be required to get it to the point of aim. You could always do what Bat Masterson did and have the front sight a touch lower but perhaps some trialling of powder charges would be a less drastic option.

Are there any downsides to this revolver? Well I can think of only one – I’d rather be pushing cartridges into the rear of the cylinder than balls into the front! But that apart, it’s a fine tool and for the time being at least, as near as you are going to get to shooting the legendary Colt Peacemaker in the UK. For those who like to dress up their firearms, Henry Krank advertises a set of white ‘ivory effect’ grips to fit this piece at £48 per pair.