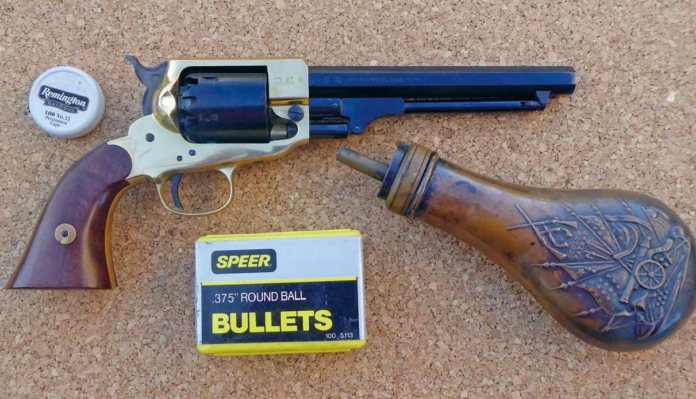 The fact that the American Civil War lasted as long as it did is a testament to the bravery and doggedness of the Confederate troops, and the skill of their leaders. From the start, their resources of manpower and weapons were far inferior to those of the Union forces. But for four years, three weeks and six days they doggedly resisted the might of the Northern Army. Finally, on April 9th, 1865, General Robert E. Lee surrendered to General Grant at Appomattox Courthouse in Virginia, realising that to continue would achieve nothing more than a further loss of life on both sides.

With the major government arsenals, along with private manufacturers such as Colt and Remington, based in Union territory, the North had little difficulty equipping its troops. The South on the other hand, would virtually have to start from scratch to build the factories needed. Purchases of revolvers from dealers, along with importations from Europe, provided a stopgap, but the need for production facilities was paramount to the war effort.

Businessmen Edward Spiller and David Burr decided to help and enlisted the aid of James H. Burton, Superintendent of Armouries for the CSA. He had considerable expertise in the manufacture of arms, as before the War he was Master Armourer at Harper’s Ferry Arsenal, and prior to that worked at the RSA factory at Enfield. In November 1861, he negotiated a contract with the government for Spiller & Burr to manufacture 15,000 revolvers with the War Department providing $60,000 for the building of a factory and purchase of machinery. They also provided a Colt 1851 Navy revolver as a pattern for their requirements, with the agreement that, because of a shortage of materials, the frames could be made from brass.

The new factory was built in Richmond, Virginia and by May 1862 was almost ready to begin, but by the end of that month, the Union Army had advanced, only a few miles from the city. So, they moved everything further south to Atlanta, Georgia, meaning that they were not ready to start producing until September, with the first few revolvers, probably no more than a dozen or so, being delivered to the war department in December 1862.

The next batch of 40 was not delivered until the spring of 1863 and most of these were rejected as faulty. Modifications were made but deliveries were very slow and the government bought the factory in January 1864 and moved it to Macon, Georgia. By December of that year, the Northern Army was knocking on the door again and the machinery was once more packed up. Production of the Spiller & Burr never resumed. Total output is estimated at less than 1,500 pieces, a far cry from the 7,000 per year agreed in the 1861 contract. Quite why the revolver turned out to be a brass-framed copy of the Whitney rather than an 1851 Colt, as originally requested, is open to speculation.

The large inventory of Pietta percussion revolvers includes accurate reproductions of many 19th century American pistols, alongside a number of what might be termed “fantasy” models. This latter group includes short-barrelled examples, or Sheriff models, of some of the more popular offerings by Colt, alongside brass-framed versions of the same models. While the guns have no basis in history, they are nevertheless popular with many Western fans. One brass frame that adheres strictly to its historical ancestry is the Spiller & Burr.

Slightly smaller than the normal .36 calibre revolvers of the period, the Spiller & Burr is a neat little offering showing one or two commendable design features. Unlike the original, Pietta has the luxury of a permanent, high tech production facility, which enables them to concentrate on product quality, rather than speed of manufacture. The black of the barrel, cylinder and loading lever, with clear cut edges to the barrel flats, contrasts well with the polished brass of the frame, grip straps and trigger guard. The Remington-style hammer has a case-hardened finish. The trigger guard is a separate entity, but the frame and straps are cast as one piece in the style of the Remington Army revolver, and this design necessitates a two-piece wood grip rather than the one-piece of the Colt models. Matte-finished walnut is used here and the two halves are held by a screw through a pair of brass escutcheons and the fit is excellent with only a hint of raised edges. The black screws and trigger make for a very attractive package overall.

The frame has a rather small capping cut-out on the right side of the shield, but to be fair the nipple recesses are fairly wide so capping by hand is not a problem, unless the weather is really cold. The rear sight is a V-groove, cut into the rear of the gutter in the frame’s top strap, the front, a conical brass bead which looks to be soldered in. The front of the frame shows a very clever interpretation to prevent one of the common mistakes made when loading this type of revolver. On most percussion revolvers, should you fail to ram a ball fully home, leaving it slightly proud of the cylinder face, the mistake may not be realised until a couple of chambers later when that proud ball will not rotate past the forcing cone of the barrel, be honest guys, we’ve all done it!

The left side of the frame on this model butts right up to the cylinder face, meaning that a ball has to be rammed fully home before the cylinder can be rotated to the next chamber. Simple, but very clever and preventing a problem in the heat of battle, when such mistakes would likely occur.

Another simple but efficient piece of design is the method for holding the combined cylinder arbour (cylinder pin) and loading lever assembly in place, likely copied directly from the Whitney revolver. The combined cylinder arbour, loading lever and ball rammer are removed from the pistol as one unit. The arbour has a semi-circular cut-out on its underside close to the front, and the cross-pin in the front of the frame, fitting in this notch, holds it in place. There is a corresponding cut-out in the cross-pin and turning it through 180º and dropping the loading lever, allows the arbour to slide out and the cylinder can be removed from the frame.

There is a mark on the cross-pin button to indicate which position is engaged. About on par with the Remington for ease of use and much better than Colt’s transverse wedge arrangement. The lever is held in place with a standard, muzzle catch and latch setup as found on most percussion revolvers of the period. The rear of the cylinder uses a Remington-style ratchet to turn it and has notches cut between each nipple recess where the nose of the hammer can be rested as a safety device when the pistol is carried fully loaded.

Those with larger than average hands may find the grips on this pistol a little on the small side, but for most there will not be a problem. The barrel is an inch shorter than the Colt Navy and the pistol weighs around six ounces less. The depth of each chamber is around one eighth less than the Colt, but I was able to get 22-grains of Henry Krank fine black powder, along with a thin grease cookie, behind the .375” lead ball. Ignition came from Remington percussion caps, and this combination proved very comfortable in use. Even with the shorter lever than other models, ramming the ball home was effortless.

Cylinder lock-up and timing is good with only a minuscule lateral movement. Trigger pull was a shade on the heavy side, but could easily be improved with a little work. Accuracy was equal to the larger Colt revolvers, with the slightly smaller powder charge obviously reducing muzzle velocity, but it would still have got the job done on the battlefield. The solid frame design meant that there were no spent caps falling into the hammer channel as sometimes happens with the Colts. I only managed around 30-shots, before I felt the effect of fouling beginning to bind the cylinder, so had to strip it out and give everything a wipe over, no big problem with the above-mentioned system. Mating a Remington-style solid frame with the Colt internal mechanism gives the Spiller & Burr the best of both worlds. All in all, this was a pleasant re-acquaintance with this revolver, and I would recommend it to anyone looking for something just that bit different from the norm.