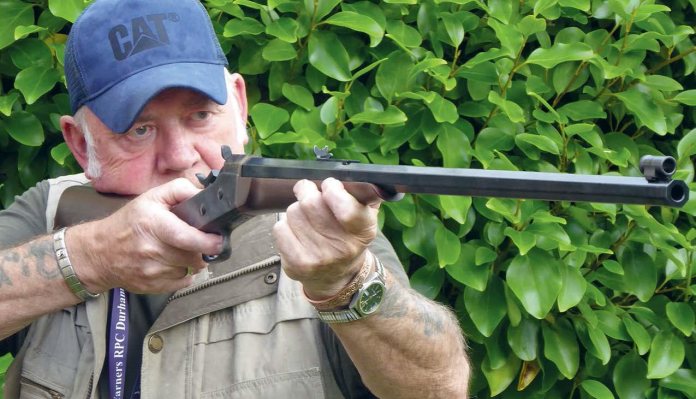 There is a fascination for many shooters with old time guns, none more so than of the American 1800/1900s period. Let’s forget about lever-actions for a moment and consider the big bore single shots, as typified by the Sharps, Winchester 1885 and my personal favourite the Trapdoor Springfield. Commonly know as BPCRs (black powder cartridge rifles), the Italian reproduction historical arms industry has blossomed from the interest in these long guns, as there are many competitions and in the US hunting too.

One make that tends to get overlooked is perhaps one of the best and most basic, that will stand toe- to-toe with the much vaunted Sharps or Winchester in terms of performance and ability. I speak of the Remington Rolling Block

In 1863 Remington designer Joseph Rider patented a split breech design, only to find it had similarities with an earlier patent belonging to Leonard Geiger. While Rider’s action was not a direct infringement of Geiger’s, a little over a year later Remington acquired the Geiger patent to essentially control production. Rider improved his design and by 1866 developed it into the now familiar Rolling Block action, one of the simplest and strongest systems for single shot firearms.

As with most firearms manufacturers of the day, Remington relied upon military contracts to keep the business running successfully, and the Rider-designed rifles did this admirably. In 1865-66 the US government purchased some 20,000 split breech carbines in rimfire calibres, most of which were delivered too late to see action in the Civil War and many were later repurchased by Remington.

It was hastily taken up by many governments as their standard rifle. In Scandinavia it was also manufactured under licence by Sweden, Norway and Denmark, with the latter using them until around 1940. During the early part of the First World War, although production of the rifle had ceased, the Royal Navy purchased a quantity in 7mm Mauser calibre from Remington’s warehouse stock. In late 1914, production was resumed to supply the French army and during the next two years some 100,000 units were delivered in 8x50mmR calibre, to arm rear-line troops. In over, 40 countries used it as their standard rifle at one time or another. It is estimated that over one million, military models were produced between 1867 and 1888.

The success of the military contracts allowed Remington to use their extensive manufacturing facilities to cater for single shot rifles in the civilian market and their products provided competition for the likes of Sharps and Winchester. As with their competitors, Remington offered them in a vast array of models, with a long list of calibres, variations in barrel length and weight, stock design and special sights etc. as well as set triggers and a choice of butt plate styles. There was even a special rimfire (.22 and .32) version aimed at the boys’ market. This had a modified rolling block action and was of take-down configuration. A figure of 250,000 units is often quoted for this model alone, produced between 1902 and 1933.

For over six decades Davide Pedersoli has been a front runner in the manufacture of reproduction firearms and their inventory of BPCRs is second to none. Extensive though their choice is of this model, it still does not compare with the options offered by Remington back in their heyday. Having said that, if you cannot find a rolling block to your satisfaction from Pedersolli, you are very hard to please!

On test, the Long Range Standard model, fitted with a heavy, 32” octagonal barrel which has a good gloss black finish and the edges of the flats are nice and sharp. The six groove rifling is 1 in 18” twist. The calibre on test was 45-70 Government, which is probably the best choice for the UK, if you want big bore. Guns are nitroproofed, so you can go original blackpowder, if you like the smoke and cleaning. Or, smokeless, which is a whole lot easier. The name of the game here is reloading (lead bullets only) and use data for BPCRs, which is set deliberately low JIC.

The black finish is carried over to the steel butt plate, hammer, trigger and the block. The receiver, which incorporates a top tang drilled and tapped for optional sights, is attractively, colour case-hardened, as are the separate bottom tang with integral trigger guard. This latter part is very slightly proud of the stock, but overall, the woodto- metal fit is first class. The wood is straightgrained walnut with an oil finish and is fairly dark, with the semi pistol grip being nicely chequered but the Schnabel forearm left plain. Many of the other models in this range have a metal tip here, which I like.

The Henry Krank catalogue shows the rifle with a semibuckhorn rear sight and a tunnel-type up front, and this is how the gun came. In the box however was a standard blade front sight and a rear, adjustable and graduated Creedmoor unit. The aperture in the rear disc was very small and had I been buying this rifle I would have either changed it, or opened it out slightly. A full set of inserts for the front sight was also supplied.

The rifle comes in at a couple of inches under four feet in length and tips the scales at a shade over 10lbs, so does not lend itself to offhand shooting for more than a few shots. The pistol grip affords a very comfortable hold, and the long forearm allows the weak hand to get forward for support if you’re not using a rest.

The Rolling Block action is simple but different and looks like it has two hammers, the rear (in-line) one actually operates the trigger. The second is not a hammer at all, but an off-set, breach opening lug, the term ‘split breech’ ably describes how it works. The breechblock is a quadrant that mounts the firing pin and rolls back to open (via the lug). The hammer also acts as the locking mechanism as it has a curved extension underneath it’s nose, that as it drops slides in under the block to lock it.

The process is simple, cock the hammer, then roll the breech open and slide in a cartridge, then roll it shut. Technically it’s still unlocked, but as soon as the hammer drops and before its nose contacts the tail of the firing pin, it’s fully engaged and locked. Repeat the process to unload and the opening movement of the block operates the extractor.

Limited to one hundred yards, I started with a fairly light charge of 12-grains of Trail Boss powder behind a 405-grain lead bullet. The size and weight of the gun, aided by its’ 5¼” deep butt plate spread the load, meaning felt recoil was negligible with this combination. Trigger pull was fairly heavy, but it breaks crisply without creep.

Not so with the heavier loads, using the same bullet, firstly came 30-grains of IMR 4198, still not uncomfortable, but you knew it was there! Then I couldn’t resist a dozen rounds with a full case of black powder, which is after all, is what the action was designed for. Not much difference between this and the IMR, but the smoke was a visual bonus!

Using the sights as they came out of the box for the Trail Boss, I could cover most 5-shot groups with the palm of my (small) hand, with the odd flyer. The Creedmoor was fitted, and the buckhorn removed, and the group size hardly improved, due in part I think to that small hole in the sight disc. I just couldn’t seem to get a clear picture, as it lets little light in. These guns really belong on the longer ranges and with the correct sights, I’m sure more competent shooters could be ringing gongs out to distances far beyond the scope of my eyes.

I pulled a bore snake through the barrel a couple of times and gave the breech area a squirt of Ballistol on the range before leaving. At home the bronze brush, toothbrush and cotton buds finished the job. Should you wish to delve into the action then it is a matter of removing the bar on the left side of the receiver and knocking out the two pins, which allows you to drop the innards on to the bench. The Henry Krank catalogue shows a number of variations of this model with different barrel lengths and some with double set triggers.

Disclaimer. Neither the author nor Gun Mart Magazine accepts responsibility for the use of the above loads in your firearm. Please use reliable manufacturers data when reloading ammunition.