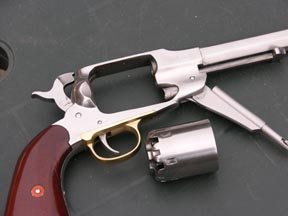 Those who use muzzle-loading revolvers in my opinion fall into two distinct groups – first are the traditionalists who like the equipment for what it is and, perhaps more importantly, as it was originally designed. Second those who shot cartridge pistols and still want the challenge of a handgun so have learned to love, or at least put up with the foibles of BP equipment. Well to be frank, problems and pitfalls is more like it, as running a muzzle-loading wheelgun successfully, though not difficult, does pose its own unique problems… Not the least of these is cleaning, as BP is a dirty and corrosive propellant, and if you have been used to the convenience of smokeless powders then adhering to the strict and mandatory cleaning regimes demanded by these guns is irksome. If not done properly and regularly your revolver will suffer.

For this test I have picked a design that in my opinion should appeal to the ex-handgunner a lot more than the traditionalists. The gun in question is Uberti’s Remington New Model Army (NMA) 1858 in an all-stainless steel build or as they describe it – ‘Inox’.

There’s little doubt that stainless steel is a superior material for BP revolvers, as it resists corrosion damage far better than carbon steel. This is not to say that you don’t have to clean it regularly, as you do, but it’s far easier to maintain and it’s even possible to remove the grips and dump the whole gun in your dishwasher. It will come out squeaky clean and also dry and all you need to do is squirt some oil into the mechanism. However, that’s for the truly lazy.

Build aside the most appealing aspect of this gun is it only has a 5 ½” barrel and even though a full framed .44” calibre build, the shorter tube and lighter weight makes for a far handier package that I feel will appeal to the ex-handgunners amongst us. The only slight disadvantage, if you consider it so, is the reduction in muzzle velocity when compared to the full length version. But for the sort of use it might get, I don’t see that as a big problem.

The Remington 1858 NMA is notable for having a solid frame, which not only makes the design inherently stronger than the two-piece build of the Colt guns, but also offers a proper rear sight. This can be of the fixed kind as on this example, or the more target-orientated adjustable unit we are familiar with on modern D/A revolvers, such as the S&W 686 or Colt Python. Again far from traditional, but offering greater accuracy potential.

In this case the rear sight is a simple, fixed V-notch cut into the rear of the top strap. At the front is a blade, set in a dovetail block so you can adjust for windage by drifting it left or right. The blade is reasonably tall, so the chances are the gun will shoot low, so it can be filed down a bit to bring the point of impact up. Between this and adjusting the powder charge it’s not a problem getting the gun to shoot where you want it to.

Uberti does have a deserved reputation for building nice revolvers and this Inox NMA compact is no exception. The stainless steel shows a smooth and tool mark free finish, while the grip is a nice piece of darkly stained walnut and smooth to the touch. Wood to metal fit is equally good and the all-brass trigger guard flows nicely into the frame with no raised edges. The barrel is octagonal and the hammer shows a short and reasonably high spur, which is checked for grip to assist the mandatory, thumb-cocking required by this single action (SA) design.

Apart from the sighting arrangements the main advantage of the solid frame build is that the gun is strong and rigid, and the arbor’s (cylinder pin) only function is to support the cylinder and allow it to rotate. This then makes disassembly easy, as all you do is drop the rammer lever and pull out the T-shaped arbour, place the hammer at half-cock and roll the cylinder out to the right.

On that point the shorter barrel means a slightly abbreviated rammer arm, with consequently less leverage available. In .44” calibre where you are literally moving more metal (lead) down the chambers, a bit of extra effort is required. This is not hard and if you feel the need then an extension tube over the arm will provide all the extra effort required.

With any revolver the timing of the mechanism is all important, as it will affect the barrel/chamber alignment and also the effort required to cock the hammer and rotate the cylinder. I have tested cheaper makes and found in some case that the cylinder shows a tight spot where it will rotate easily for four or five operations then tighten up on the fifth or sixth.

This Uberti proved consistent with the minimal amount of side float in the cylinder indicating that the bolt (rising lug that locks the cylinder in position) was properly proportioned and fitted. Likewise the lever that rotates the cylinder via teeth at the rear was also properly fitted. The end result being a well timed mechanism that offers a consistent and reasonably easy cocking stroke and operation. Another bonus of this is the fact that the gun will ‘spit’ less, this is where the ball makes the transition from the chamber into the start of the barrel/bore. On a badly timed gun the bore and chamber may be off set to each other, and as the ball enters pieces of lead will shave off and be blown backwards and sideways – a condition known as spitting. As can be imagined this is off putting to both the shooter and those to either side of them on the line.

Trigger operation was good too, with the gun showing a crisp medium weight release of around 3-4 lbs. The wide blade certainly aids control and on target you can easily maintain the sights/aim, pull and follow through well enough, which is the art of successful shooting.

If I have one criticism of the 1858 NMA design in general then it has to be that the nipples are a bit hard to access for capping. This is exacerbated by the minimal cut-out in the rear right shield of the frame, which has been done to allow you to get your fingers in to do the job. I have found that a slim, in-line capper is a near essential item, as it lets you get the percussion cap on without your big, fat fingers getting in the way…

Being a muzzle-loader, keeping things gas tight is a major consideration, as if the ball is too loose a fit in the individual chambers then the propellant gas will wash round it with a loss of both velocity and accuracy. In truth round ball is best as it can be bought over-sized and when rammed will become an interference (gas-tight) fit in the chambers, which is what you want. Another and more unpleasant symptom of loose balls, if you’ll pardon me, is the chance of the flash entering another loaded chamber and setting off the powder. The result can be disastrous with all six going off at once, this is known as a chain fire or flash-over and is - if nothing else - impressive to witness, as I can attest to.

You can probably stoke up this gun with between 25 and 30-grains of FFFg black powder, but they do tend to kick a bit more. With the shorter 5 ½” barrel I have found between 10 and15-grains is more sensible and economic, as with a maximum charge a lot of the powder is wasted in flash and flame effect. On that point it’s best to use an over-powder wad, which will act like a secondary barrier against a flash over. It will also help to scrub the bore and to be really sensible a special lube over the chamber face will cut down on fouling build up too.

As can be seen there’s a lot to consider if you want to get maximum performance out of your BP revolver. With a fixed sights system such as this, your actual load might be dictated as to how the gun shoots, as some experimentation in charge weight will make the gun move to different points of aim/impact. This is ably illustrated by my old cartridge-firing Uberti 1873 Colt copy in 44-40 WCF. Using just 5-grains of Red Dot smokeless powder under a 200-grain bullet would let the gun shoot to point of aim at 25 yards without touching the sights at all. Move that up or down even a little and the groups would wander off left/right and up/down.

Overall a decent example of a muzzle loading revolver – well built and timed, in what is undoubtedly the best material for the job. Uberti's 1858 NMA Inox 5 ½” strikes a good compromise on practicality and performance in what is a primitive and uncertain system.