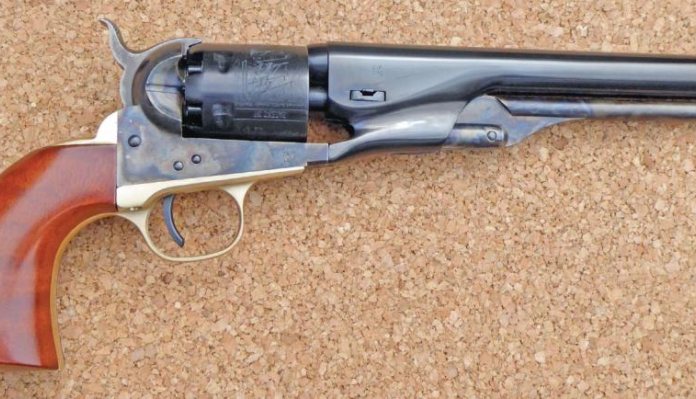 I have owned a number of black powder revolvers over the years and the reproduction of the Colt 1861 Navy model remains one of my favourites. I purchased a pre-owned example many years ago for £50 and had it longer than any other percussion revolver that has been in my safe before or since. With its overall length of 13-inches and tipping the scales at a shade over 2½lbs, this is a very well-balanced pistol and is attractive to boot. The soft contours of the barrel lug, first seen on the 1860 Army model, complement the round barrel and the streamlined rammer attachment add to the clean lines. The 7½-inch forged steel barrel, with its seven-groove, left-hand twist rifling, is finished in a gloss black, as is the cylinder. This latter has a roll engraved scene depicting a naval battle between the Texas navy and that of Mexico. It is often thought that this scene gave the pistol its ‘Navy’ nomenclature, but as the same roll engraving appeared on the Colt 1860 Army revolver, this is obviously not the case. The scene on these reproductions varies very slightly from the originals and there is no serial number on the Uberti cylinder, whereas the Colt would be numbered.

What is nice to see is a reproduction of the attribution of the cylinder scene to Waterman Ormsby, as per the originals. The cylinder and barrel slide on to a central arbour screwed into the recoil shield and when fully located, a slot through the barrel lug lines up with a corresponding slot in the arbour and the parts are held together by a spring-loaded wedge, tapped in from the left side of the lug. A lip on the wedge’s spring and a small screw prevent the wedge from accidentally falling out. Two pins on the front of the forged steel frame, which has a colour case finish, mate up with two holes in the rear of the barrel lug to provide extra solidity. This system is often touted as a weakness in Colt percussion revolvers but with a total of some 900,000 units being produced across the various models, it was obviously not too much of a handicap.

Both trigger guard and backstrap are polished brass, with black steel being an option at the same price, and the one-piece walnut grip has the standard Uberti high gloss finish. The steel strapped version has cut-outs in the recoil shield and a groove in the base of the backstrap for the fitment of a shoulder stock. Wood to metal fit is very good with a couple of very minor raised points on the wood, and all edges and contours of the gun are well-defined. The original 1851 Navy pistol had a brass post for a front sight, whereas this updated model shares the same sight as the 1860 Army, being a brass blade soldered into the barrel. The rear is a v-notch cut into the top of the hammer face and was found on all Colt percussion revolvers. The width of the notch is a little narrow for some and it is not unheard of for owners to cut this a little wider to improve the picture.

The frame, along with the loading lever and the hammer, has a colour case finish and the colours on this example are not as vibrant as some I have seen. There is no provision on this example for the fitting of a shoulder stock. A groove is milled into the capping cut-out on the right of the recoil shield which is intended to aid the placement of the caps, and the top right of the recoil shield face is channelled to allow spent caps to fall clear when the gun is cocked. In practice this does not always do the job and you may get the Colt “cap in the hammer slot” where all or part of the spent cap falls into the channel between the frame and the hammer. Tilting the pistol to the right as you cock can help alleviate this. If it does happen without you noticing it there is a possibility that the fragments can prevent the hammer from striking the next cap. It’s handy to have a pair of long-nosed pliers in your kit if you shoot Colt repros. The loading lever has a spring-loaded catch and latch arrangement and held the lever in place during shooting without any problems.

The rear of the cylinder has Colt’s solution to the provision of a safety device that was used on the vast majority of their percussion revolvers.

This consists of a small pin on each shield between the nipples and the hammer can be laid at rest with one of these pins located in a slot cut into the hammer face, thus locking the cylinder. Uncomplicated but quite effective. The hammer spur has some neat chequering and the pistol locks up nice and tight with the minimum of fore and aft movement of the cylinder.

A great many black powder revolver shooters will be fun shooters who enjoy the challenges posed by muzzle loaders, but there are also many who take these pistols a step further with some serious competition shooting. The fun shooters can be found on many club shooting lines while the Muzzle Loaders Association of Great Britain (mlagb.com) host competitions for those wishing to pursue this class of shooting to its limits.

In between these groups are the Western enthusiasts who enjoy a bit of competition (the really serious Western shooters will likely be using smokeless conversions) but who also enjoy the fun side of things. Check out the British Western Shooting Society at bwss.co.uk.

Whichever avenue you choose, the .36-inch calibre Navy revolvers can generally produce the same results as their big brothers, the .44-inch calibre Army versions. For ranges up to and including 25-yards my go-to load is 25-grains of Henry Krank fine black powder behind a .375-inches round lead ball, the two separated by a thin ‘cookie’ consisting of melted candle wax and beeswax. Remington percussion caps provide the ignition, in this case number 11.

The loading cut-out in the barrel lug is quite generous on this model and makes loading both powder and ball very easy. Club or range rules may dictate whether or not you must use phials for the powder or if a powder flask is permitted. I prefer loading with the pistol in my right-hand, but you will often see shooters with wooden loading stands which have been made for the purpose. I choose to load powder, cookie and ball into the first chamber, ram it home and leave the rammer down while I load the next chamber, and do this till the gun is fully loaded. Others will load all of the chambers with powder then follow with cookies (or wads) and then finally the six balls. Do whatever feels comfortable for you.

Recoil with the above load is very manageable and if you do your bit then both fun shooters and Western enthusiasts should be able to put all of their shots on to relatively small targets at 25-yards. MLAGB shooters will doubtless turn in some very respectable scores at the same distance. It will not be long before you begin to see the results of fouling on the working of the revolver. In this instance binding became apparent as we approached the end of the sixth loading (36 shots), so it was a case of taking off the barrel and cylinder and giving all of the affected surfaces a wipe down. Running a brush through the barrel and a dab of grease on the cylinder arbour before re-assembling and we were ready to go again. If you choose to use the more expensive, and seemingly cleaner burning, Swiss black powder then you should be able to get a few more shots between these cleaning procedures. I was fortunate not to encounter the “cap in the channel” syndrome during the test.

You will come across a number of different cleaning practices for these guns and you will eventually find one that suits you. Suffice to say that you need only hot soapy water as a cleaning agent. There were no fancy solutions around during the American Civil War and many of those revolvers are still around in shootable condition. Just make sure you dry the parts thoroughly before putting the gun away.

Finally, you may probably have heard of the dreaded multiple discharge or “chain fire” which causes one or more chambers of these revolvers to go off at the same time. In over 30-years of shooting muzzle loading revolvers I have encountered this only once, when a second chamber, adjacent to the one under the hammer, discharged its load. The ball clipped the edge of the wedge and went harmlessly on its way with no damage to myself or the gun. Many are the claims as to how this phenomenon happens and I can do no better than direct you to this article which is as good an explanation as I have come across: geojohn.org/ BlackPowder/bps2Mobile.html.

The year 1861 saw the final development of Colt’s percussion revolvers and brought the designs to their zenith, although production of the various models continued for a number of years. Sadly, Sam Colt met an untimely death the following year, but I am sure he would have been well-impressed with Uberti’s recreation of one of his finest specimens.