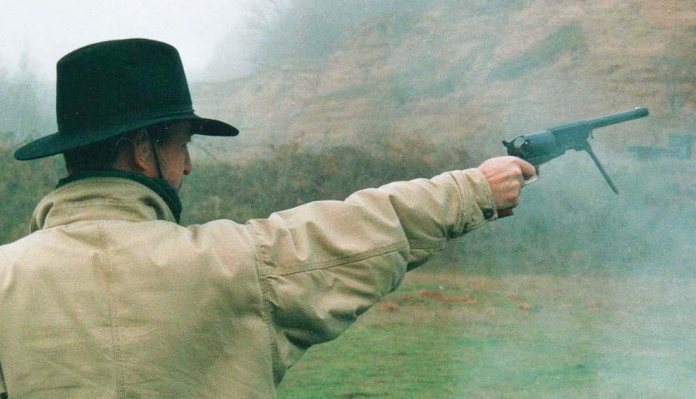 Sam Colt was nothing if not persistent. Fascinated by guns from an early age, his dogged determination paid off when a number of friends and family agreed to invest in his manufacturing venture in Paterson, New Jersey. The new factory, opened in 1836, produced handguns, rifles and shotguns in a variety of calibres, but the hoped-for military contracts did not materialise as, even though the guns were technically superior to the competition, they were plagued by unreliability problems. There was however one small glimmer of hope, when the Republic of Texas chose to arm its army and navy with a number of Colt’s firearms. When these two forces were disbanded, some of the five-shot Paterson revolvers were given to the recently formed Texas Rangers. But the Texas sales were not enough and in 1842 the New Jersey factory closed its doors. The venture was over, for now.

In April, 1846 the United States was officially at war with Mexico and a number of Texas Rangers were enlisted because of their knowledge of the border area. Among these was Samuel Walker, who had his company armed with the five-shot Colt Paterson revolvers.

Although Colt was no longer involved in arms manufacture, he still held the patents to his products and when Sam Walker was sent to Washington to seek recruits for the new U.S. Regiment of Mounted Riflemen, Colt saw the possibility to revive his fortunes. He contacted Walker and between the two of them they came up with the design of a new revolver. As good as the earlier Paterson pistols had been, Walker asked for improvements. An increase in calibre from .36 to .44; six shots rather than five; fewer moving parts; an easier method of loading; (the ‘Texas’ Paterson had to be partially dismantled to load); and a trigger guard. The resulting revolver, named by Colt in honour of Walker, tipped the scales at over four and a half pounds empty and had an overall length of almost 16-inches.

Walker persuaded the Army to sign a contract for one thousand pistols and although he had no manufacturing facilities, and more to the point no money, Colt promised delivery in three-months. He obviously realised that this was an impossible deadline for a new and untried arm, but a contract had been signed and he was not about to let this chance slip away.

Arms maker Eli Whitney Jnr. was coaxed into making the new guns at his Connecticut factory, where Colt hired the required skilled labour, paying them well above the going rate for wages. It took six-months to fulfil the contract and although the revolver still had shortcomings, it was enthusiastically received by the troops and another order for one thousand was placed by the Army. Sam Colt was back in the firearms manufacturing business.

Make no mistake, this is a big gun. At around four and three-quarter pounds fully loaded it is almost twice the weight of the long-barrelled Colt Peacemaker, and it is obvious why it was designed to be carried in pommel holsters around a saddle rather than carried on one’s person – Clint Eastwood in The Outlaw Josey Wales excepted. Uberti has, as always, done a great job in recreating this revolver and although it will not be as popular as the smaller army pistols, like the Colt 1860 or Remington 1858, for those wanting a lot of fun with a muzzle loader, and a bit of ‘range cred’ to boot, this model fits the bill admirably.

The forged steel barrel, cylinder and back strap are finished in a gloss black, while the frame, loading lever assembly, cylinder arbour and hammer have a colour case finish. The square-back trigger guard, a style that would become round a few years later, is polished brass. Screws are all blacked and on this model the trigger screw and cylinder locking bolt screw do not protrude all the way through the frame, with only the heads being visible on the left side. The rounded top to the wood grip, where it fits the frame, would later be squared off, giving a neater appearance and presumably making the parts easier and cheaper to produce. All edges are cleanly cut and the fit of the parts is very good.

Many years ago, these reproductions suffered one of the major faults of the originals, in that the loading lever would drop down every time the pistol was fired. Less than perfect and more than a little annoying at best, but imagine that happening in the heat of battle! Thankfully the problem seems to have been solved with later models. The lever retaining spring, dovetailed into the bottom of the barrel, fits into a slot in the upper face of the loading lever and this spring appears somewhat stronger than previously encountered. This design was rectified on Colt’s subsequent models, with the introduction of a catch and latch arrangement to hold the lever in place.

The large cylinder (originals were said to hold 60-grains of powder) the same as the musket charge of the day – is rolled with a representation of a fight between mounted troops and Indians. On the rear face of the cylinder, between two nipples, is a pin which acts as a safety device. The face of the hammer has a slot which, when the hammer is at rest, fits over this pin locking the cylinder, allowing the pistol to be carried with all six chambers loaded. This method might have proved expedient in combat, where that extra shot could be life-saving, but it will likely be frowned upon in today’s safety conscious world. Later versions of Colt percussion revolvers would have six of these safety pins fitted.

There is no rear sight as such but merely a v-notch cut into the top lip of the hammer, a practice common on all Colt percussion revolvers. The front sight is a tapered blade soldered into a shallow groove in the barrel.

The set-up is adequate for the type of shooting for which this style of revolver was intended.

The ‘open top’ configuration of the Colt percussion revolvers is often cited as a weak point in their design, but the large number produced over a period of some 30-years or so (counting the Paterson examples) would seem to indicate that the system was up to the job. The arrangement relies on the three major components, frame, cylinder and barrel, being held together by a wedge or key inserted through the barrel lug and a slot in the cylinder arbour.

The 60-grain loads mentioned above would have put a lot of stress on those early pistols and doubtless contributed to the number of burst cylinders that occurred at the time, but for a little fun on today’s ranges this full load is unnecessary. Previous encounters with this model showed me that somewhere between 40- and 45-grains would do the job and I have a spout that throws 44-grains, so that was used to preload phials. I used a .454-inch round lead ball backed by a grease cookie (I find the soft grease over the ball rather messy) and ignition was achieved with Remington caps. A decent cut-out in the right side of the barrel lug makes loading the balls easy and that long lever is also a plus.

The main spring on this model is a stronger ‘v’ pattern, rather than the flat type used on later Colt single action revolvers. Whilst this requires slightly more effort to cock the gun, it meant that there were no light strikes, even if caps were not pushed fully home. The ‘cap in the hammer slot’ syndrome, sometimes encountered with these open top designs, did not manifest itself with this pistol.

Although this powder charge is close to twice that used on the .44 calibre Armystyle revolvers, the weight of this model makes recoil very manageable, even shooting single-handed. You can, however, allow the muzzle to ride above head height if you wish, making it look much more of a handful than it really is. This is a fun gun, so milk it for what it’s worth! It is never going to be a tack driver but you can keep it on an A-4 paper all day long at 25-metres.

It ran for six cylinder loads (36 shots) before I felt the need to address the sticking caused by black powder fouling. This necessitates taking the gun down to its three major components and wiping the cylinder arbour and its aperture in the cylinder, applying a little grease to the former and reassembly.

I find that the three-part construction of this pistol comes into its own when you have to clean it. All visible surface areas are very accessible and the job can be done in fifteen minutes or so. I have never found it necessary to strip the pistol after every use but every two or three outings it would be prudent to take it down completely and clean the mechanism.

For those looking for a quality piece of kit that will provide hours of enjoyment, this revolver will do the job. You will probably find one or two (or more) fellow shooters standing behind you as you shoot, just waiting for an invitation to have a go. Go ahead, make their day!

The two revolvers used by Clint Eastwood in the Josie Wales movie were Uberti models, rented to the movie industry by Stembridge Gun Rentals, converted to take blank cartridges. In 2007 Stembridge auctioned off some of their stock and one of these sold for $31,000. In the same auction a similar pistol used by John Wayne in True Grit made $1000 more.