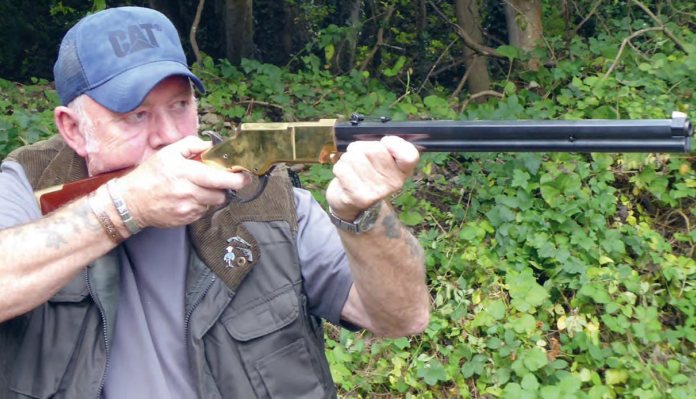 The advent of Cowboy Action Shooting in America during the mid-1980s saw a renewed interest in firearms of the Western frontier. Today, reproductions of Winchester lever guns will be found at the range, with the Models 1873 and 1892 probably vying for the top spot, followed by the 1866.

Far less common will be specimens of the Henry rifle. Manufactured by Uberti in Italy and Henry Repeating Arms in America, this model has never found universal acceptance by shooters or re-enactors. Could it be because there is a lack of exposure in the Western movies and TV series we grew up with, where everyone had a Winchester 1892? Or is it that quirky loading system, where cartridges are inserted rearwards from the muzzle end rather than through a side gate?

The original Henry rifle can trace its ancestry back through the Volcanic range of pistols and rifles to the Smith-Jennings repeater and their forefather, Walter Hunt’s Volition repeater. When the Volcanic operation finally went under, a shareholder called Oliver Fisher Winchester was granted all of the company’s assets. Realising that the ammunition was a weak point, he assigned the task of improving it to his shop foreman, Benjamin Tyler Henry. The resulting Henry .44 flat rimfire cartridge was the result and the new rifle was built around it and bore the foreman’s name.

Coming as it did just prior to the American Civil War, you would have thought that the Henry was in a perfect position to take advantage of the rapid increase in the need for small arms in 1861. Given that front line troops were generally issued with muzzle-loading muskets, the increased firepower of these new rifles would have been a great advantage to whoever owned them. However, the top brass decided against purchasing large quantities of this 15-shot repeater in favour of the 7-shot Spencer, although a small number of the Henry model were issued as trials to some lucky units and a few were purchased privately. Despite trying, Winchester never did get to supply the Army with lever-action rifles, despite many Western movies showing the cavalry using Model 1892 carbines.

With the advent of the Model 1866, with its side loading gate and wood forend, manufacture of the Henry rifle ceased, with a shade under 14,000 units leaving the factory during its six-year production run.

The design of this rifle, even with today’s design and manufacturing facilities, makes it a bit more complicated to manufacture than its successors, which had a separate barrel and magazine tube.

This Uberti version is probably a nod towards the Cowboy Action Shooters who favour a shorter barrel in competitions, as although there are a couple of documented examples, no short barrels were offered in the 19th-century catalogue. The magazine still has the capacity (8+1) to satisfy the majority of rifle stages in a CAS match.

The blue on the barrel (18½” tube with 6-groove, 1:16” RH twist) and tube have a nice gloss and the edges are sharp. The lever and hammer have case colours with the former having a small projection at the rear that allows it to be locked in place for transit by a swivel catch on the lower tang. The receiver and familiar Winchester-style crescent butt plate are polished brass. The stock is a piece of straight-grained walnut with the Uberti red/brown gloss finish. The fit of the parts is very good, with only very minor raised edges where the wood meets the receiver.

Back in 1860, the early models were made with an iron frame, and these did not have the lever locking catch that is fitted here and on all subsequent brass-framed originals.

Uberti offers a case-coloured steel frame version, at a small price premium, also without the catch.

The rear sight is a simple ladder arrangement with a ‘v’ notch visible in the base when the sight is flat, and another in the sliding bar seen when the ladder is raised. The front sight is a white metal blade with a square-shaped top when viewed from the rear and I feel that a square notch in the rear sight would have been more conducive to a better sight picture, but the setup works reasonably well in practice.

The toggle link mechanism of the Henry is fairly simple, but not overly strong, and was carried over into the Models 1866 and 1873. The same applies to the modern Uberti versions and all three models share the same internal layout, making them easy to maintain and clean. The side plates on this gun require the screw on which the lever pivots to be removed before they can be detached, a little more complicated than the later Model 1873.

All in all, the Henry has nice clean lines and is an attractive package, plus it will certainly get you a little attention on a shooting line from those who have never handled one.

Loading the Henry on a firing line always gets a bit of attention from those who have never seen one before. The magazine tube has a slot running the full length of the underside. A coil spring in the tube keeps the loaded rounds pushed towards the breech. At the rear end of the spring is a plastic buffer behind which is the brass magazine follower. A button on the follower protrudes through the slot and pushing this towards the muzzle compresses the magazine spring. When it reaches the end of its travel, around 5” from the muzzle, the spring has been condensed into a collar around the barrel. With the slot facing you, the collar can be turned to the left, then you can release the follower and the magazine is now ready to be loaded. A word of warning - the corners of the magazine tube are very sharp, and it is easy to run your thumb over the edge here. After my first experience of this, I have taken a small file to these corners on all subsequent Henry rifles I have owned.

You are now ready to load your cartridges into the tube, primer first until you reach the desired capacity. This ‘carbine’ version holds 8 in the tube while the full-length model holds 15. Next, hold the follower tightly as you return it to the central position, so it can slide into the slot. If you are only loading half the magazine, be very careful not to let the follower drop under its own spring pressure – lower it down gently. Cartridges have been known to detonate in the tube as the follower slams down hard and fast.

The action of the brass framed Henry and its successors, the Models 1866 and 1873, is very smooth, as the carrier block which raises the next cartridge into the firing position is also brass, so there is little or no friction between this and the receiver. With the magazine loaded, the first round is already in the carrier block and operating the lever lifts the block up to align the cartridge with the breech. This action also cocks the hammer via an extension on the rear of the breech block. Bringing the lever back to rest pushes the cartridge into the breech and drops the carrier back down to accept the next cartridge. You can shoot the rifle as fast as you can operate the lever.

Another little caveat here. As each cartridge is expended and the next one comes down the tube, the brass magazine follower is also coming rearwards, and you need to be aware of this as it will, at some point, come into contact with your hand. Fractions of a second can be lost here when shooting against the clock in CAS competitions. As you shoot subsequent shots, an extractor in the breech bolt pulls the empty case back and the carrier block, coming up with the next round, throws the empty clear.

Lever-action rifles are never going to be tack drivers, although I will admit that some Marlins with scopes fitted can put up respectable scores in gallery competitions. The Henry in particular is more of a fun gun and should hold its own in CAS competitions if you do your bit. The Uberti version is only available .44/40 and the .45 Colt that we have here. Neither of these was available for the original Henry, but .44/40 would have been a little closer to the .44 Henry flat cartridge. The .45 Colt was not available at all as a rifle number back in the 19th century.

With 8-grains of Unique powder behind a 250-grain cast lead bullet, recoil was quite mild and performance at 25 and 50 yards was good enough to keep you in the match with the rest of the cowboys. Cowboy Action shooting is about fun, and this rifle will give you that by the bucket full – just remember that moving magazine follower!