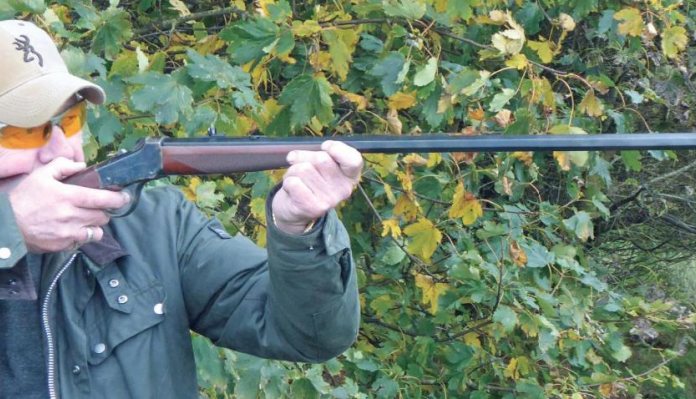 With the UK handgun ban, Cowboy Action Shooting was decimated here, and apart from a limited number of Western aficionados, lever action rifles were re-routed to Gallery Rifle competition where the calibres of choice would become the magnum cartridges in .357-inch and .44-inch. The ‘other’ short action rifle cartridges, Winchester’s bottle necks, did not die out completely however and despite their illdeserved reputation for being difficult to reload, can still be found on a number of club firing lines. One of these is the .32-20.

The first meeting between the Browning brothers and representatives of the Winchester Repeating Arms Company took place around the middle of May, 1883, when the Brownings admitted to infringing a patent owned by Winchester. A contract was subsequently drawn up and signed on 1st June which allowed Winchester to make up and sell the remaining 125 or so illegal castings that Browning had on-hand on consideration of a royalty payment of one dollar, with Browning agreeing to make no more. The news was not all bad for John Browning and his brothers as Winchester purchased the rights to manufacture the single shot rifle concerned, and this laid the foundation for a long and successful partnership between the two parties.

Back in New Haven, Connecticut, the Browning design was tweaked by Winchester’s engineers and in 1885 was presented to the public as the Single Shot Model, allowing them to compete with the likes of Remington and Sharps in the big bore market. Winchester rifles have subsequently been named after their year of introduction by shooters and collectors, and this rifle became generally known as the Winchester Model 1885.

Catering for the masses

While Winchester lever action models were usually limited to a small number of calibre offerings – the Model 1886 had the largest choice with around 10 – the Model 1885 was produced to cater for a much greater variety of shooters engaged in hunting and target shooting. Ranging from .22 rimfire for small game up to .50 centre fire to cope with buffalo and elk, there were some 30 or so calibre options available. Offered in two styles of receiver, High Wall and Low Wall (easily distinguished by the portion of the hammer and breech block that can be seen with the action closed), there was also a long list of variations when it came to barrel length and weight, finishes, sights and also minor variations in butt plates and trigger guards. Deluxe models could be had with pistol gripped stocks, double set triggers and half-octagon-half-round barrels as well as checkering and engraving. By the time production of the Model 1885 ended in 1920, just short of 140,000 examples had come out of the New Haven factory and the long list of choices available for this rifle make it a favourite among today’s American collectors.

The Italian reproduction firearms manufacturers are a godsend to today’s fans of the American guns of the mid and late 19th Century and it will be a very fussy individual who cannot find something that lights their fire. I think it is probably safe to say that the majority of shooters in BPCR matches will use a clone of the Sharps rifle, the simplicity and strength of John Browning’s design deserves some consideration.

Both Uberti and Pedersoli (davide-pedersoli.com) offer examples of this rifle in their catalogues with the latter limiting your choice to four models of the High Wall variation in two calibres (.45-70 and .38-55). Uberti, on the other hand, shows both High and Low Wall versions with calibres ranging from .17HM2 up to the massive .45-120 centre fire. In general, the smaller calibres are available in the Low Wall with the heavier offerings kept to the High Wall, although a couple of ‘pistol calibre’ cartridges are available in both models. Although not having the same long list as the original Winchesters, Uberti includes a number of modern calibres (e.g. .17HMR and .357 Mag.) and also a decent smattering of optional features. Be aware that while these are in the Uberti catalogue (ubertireplicas. com), many will not be available off the shelf at your local gun shop and special orders can incorporate a lengthy wait.

The model we have here is the Low Wall Special Sporting rifle, the Special designation coming from the pistol grip stock and checkering at the forearm and wrist. As with most of the European imports, the gun is a fairly accurate representation of its 19th Century ancestors. The whole of the operating mechanism, frame, trigger guard/ lever, breech block, hammer and trigger, is case coloured with strong blues predominant. The tapered, 30-inch barrel and the customary Winchester curved butt plate are deep black. Edges on the octagonal barrel are sharp and the overall wood to metal fit is very good with only minor discrepancies. The straight grain walnut woodwork is finished in Uberti’s reddish varnish with excellent checkering. I have seen examples of this model with a trapdoor covering a hollow area in the butt which accepts a sectioned brass cleaning rod. This could presumably be ordered as an extra if required.

Sights are the standard basic models fitted to a large number of reproductions. The fixed height front, a blade whose base is dovetailed into the barrel and held by a small screw, is adjustable laterally. The rear is the popular semibuckhorn arrangement with a sliding elevator for vertical adjustment. Should you wish to add something a bit more exotic to the rear the top tang is drilled and tapped for one of the optional sights available. The placement of such a sight would cover up the machine-engraved Uberti name on the top tang.

I find that the pistol grip stock, combined with the standard trigger guard, affords a much more comfortable grip than the extended guard found on the double set trigger models (see Gun Mart Dec. 2018). The chequered, Schnabel-style forearm is nicely proportioned, and the rifle has a good balance despite that 30-inch tube. The overall package, with its clean lines, is pleasing to the eye and seems very well put together.

In 1882, Winchester introduced the .32-20 cartridge as the third and final centre fire option following the .44-40 and .38-40 – for its Model 1873 rifle. It quickly gained a reputation as a small and medium game cartridge and many American manufacturers turned out rifles, single shot and repeaters, over the years. When Winchester announced the Browning designed Model 1892 rifle as the replacement for the 1873, the .32-20 was included in the line-up from the start and later became the basis for the .25-20 and .218 Bee cartridges. While a number of modern cartridges have mostly superseded this old veteran for putting meat in the pot, it still has a following among today’s American shooters as a fun cartridge, notably among Cowboy Action shooters, with the .32-20 once again available in a lever action rifle from Uberti.

Dropping the combined trigger guard/lever brings the hammer back to half-cock, operates the extractor and lowers the breech block, exposing the breech to insert a cartridge. The rim of the cartridge needs to be pushed up to meet the extractor claw and then into the breech, which allows the action to close by pulling up on the lever. Pull the hammer back to full-cock and you are ready to go. When reloading, if the lever is pushed down smartly with the muzzle slightly raised the empty case falls clear of the action, otherwise the case is only extracted and needs to be removed with your fingers.

The trigger is fairly wide and flat and on the test rifle broke very cleanly with no perceptible creep, but it was exceptionally heavy and would need a little work to wring the best out of the gun. If you are shooting from a bench then, unless you have quite high front and rear rests, the rifle will have to be lifted up to reload to prevent the lever from contacting the bench when it is lowered.

My handloads for the ‘pistol calibre’ cartridges are quite mild to comply with the range limits at my (25 metre) indoor club where most of these calibres are fired and as such don’t give a fair representation of the rifle’s capabilities at longer ranges. The loads also don’t really allow full obturation of the cases with the result that there is sometimes a little blowback of the gases causing dirty brass, with some powders being worse than others. For the test here I was using Starline brass with 2.5-grains of Trail Boss powder behind a 115-grain lead bullet cast from a Lyman mould, although commercial lead bullets are available for this calibre. With stiffer loads it is possible to push this bullet up around the 2000fps mark which should seal the breech nicely. The results of the escaping gases can be seen on the extractor in the photograph of the open breech. Not really a big deal as you can get a toothbrush in there to clean it and, with the lever lowered and the hammer on full cock, it is also possible to clean the barrel from the rear with a rod.

Single shot rifles are pleasing to use and it does not take long to get into a rhythm meaning you can get through your ammunition fairly quickly as you don’t have to stop to fill up magazines. If you are in the market for such a gun, then give the Mosel 1885 some consideration. Check with the distributor to see what is readily available and the length of wait if you are looking for something different.