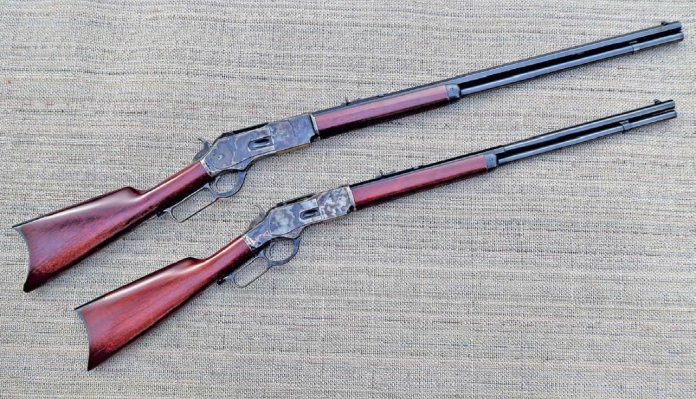 The year 1873 could probably be described as the year that the centrefire cartridge came of age. The .45 Colt cartridge heralded a new era for Colt handguns when the Single Action Army Revolver (aka the Peacemaker) was adopted as the standard sidearm for the cavalry. The U.S. Army adopted the .45-70 cartridge for its Trapdoor Springfield rifles and carbines, and the combination remained in service for almost two decades. Plus, Winchester introduced what is surely their most famous lever gun, the Model 1873, often touted as ‘The Gun that Won the West’.

The Model 1873 used the same internal parts as the 1866, meaning it was still a relatively weak action, but gone was the brass receiver, to be replaced, initially by iron, and then steel. The ejection port on top of the receiver now had a sliding dust cover, which protected the inner moving parts from the ingress of foreign matter. This cover opens as you operate the lever for the first time and stays open until manually closed. The receiver was fitted with two removable side plates, making access to the mechanism easier for cleaning and repairs. Production costs were reduced and speeded up by making the barrel and magazine tube as separate entities.

The new rifle was built around a new cartridge, the .44 calibre Winchester Centre Fire (.44 W.C.F.). Utilising a similar 200-grain lead bullet as its .44 calibre rimfire predecessor, backed by a 40-grain charge of black powder, the cartridge quickly became known as the .44-40, and subsequent offerings were described using the same terminology. Different methods of priming were tried and initial delivery of the rifles was sporadic until a suitable system was settled upon.

Whilst not offering a great power advantage over the .44 rimfire, this new cartridge had the advantage of a re-usable brass case, and Winchester was not slow to maximise this fact in their advertising. They also introduced a range of hand tools to facilitate the reloading process as well as supplying all of the components needed. Rather like a large set of pliers, these tools would de-cap and resize as well as seat the new primer and the bullet. Also, they took up little space in a pack or saddlebag.

Whereas the earlier rifles had been chambered for a single rimfire cartridge, the 1873 was eventually offered in four different calibres - .22LR. .32WCF (.32-20), .38WCF (.38-40) and its original .44-40, with around 80% of the total being in the larger calibre. For the first time, customers were given much more choice when purchasing a Winchester rifle, with varieties of barrel shape (octagonal, half-round or full round), weight and length. The standard finish was a casehardened hammer, lever and butt plate with the rest blued, but casehardened frames were an option along with nickel plate. There was a choice of sights, magazine lengths, stock styles etc. Standard models were a 20” barrel carbine, 24” rifle and a 30” full stocked musket. The latter was targeted at military sales, and once again it was unsuccessful in the US, but there were sales to foreign military powers. The original model 1873 had one of the longest production runs (almost 50 years) of any Winchester rifle and around 720,000 left the factory during this time. Plus, today, the rifle is again available bearing the Winchester name.

While not offering the variety that the originals did, the Uberti catalogue of this model is pretty impressive, covering 14 different variations, with a choice of up to six calibres and six barrel lengths from 16” to 30”. It seems surprising that Uberti has not elected to produce a Model 1873 in .22 rimfire calibre, particularly as they have the barrel blanks on hand for the 1866 model. There are round, half-round and octagonal barrels, straight and pistol gripped stocks, plus different butt plate styles. Sights are fairly basic, as per the originals, but are more than adequate for the type of use these guns will receive.

The standard finish shows a varnished walnut stock and forend, with blue barrel, magazine and butt plate, plus a case coloured receiver, lever, hammer and trigger. Check out the Uberti website (www.ubertireplicas.com) to see alternative finishes, such as antique patina and charcoal blue. However, I have not seen these in the UK, so enquiries will need to be made if one of these tickles your fancy.

There is even a competition-ready model, with a short-stroke action and a rubber butt plate (at a small premium), for the dedicated Cowboy Action shooters. The Special Sporting Model offers a semi-pistol grip with chequering in this area and on the forend, while the .44 Magnum calibre is available with a 24” barrel only and with a blue receiver.

With a range to suit almost all tastes, the Model 1873 has proved to be a firm favourite among today’s shooters, whether competing in Western events or just for a bit of plinking. The majority of today’s shooters will be reloading for these ‘pistol calibres’ and there is no shortage of tools and components from a number of manufacturers. Prices range from £1193.00 to £1306.00.

Conscious that their rifles, although offering a good rate of fire, were not really suited to hunting some of the larger game that populated North America, Winchester set about adopting their toggle link action for a more powerful cartridge. The resulting Model 1876 was introduced to the public at the 1876 Philadelphia Centennial Exposition as the Centennial Model, commemorating the anniversary of the Revolutionary War. The gun was essentially no more than an enlarged version of the 1873.

Experiments showed that this mechanism was not strong enough to handle the larger 405 and 500-grain bullets of the .45-70 Government cartridge, so a shorter, fatter, bottleneck cartridge, the .45-75, was introduced carrying a 350-grain bullet launched by 75-grains of powder. Other offerings were .40-60, .45-60, and 50-95, but the 350-grain bullet weight was never exceeded.

Standard models had 26” or 28”, round or octagonal barrels, with a blue finish to parts except for hammers and levers, which were case hardened. Stocks were straight gripped walnut. Carbines had a 22” round barrel, with the full-length stock set back from the muzzle slightly to allow for the fitting of a bayonet. A scarcity among the model 1876 is the 32” round barrel musket, presumably made to attract military orders, but these were not forthcoming.

The Model 1876 carbine, in .45-75 calibre, was the chosen long gun of the North-West Mounted Police for the last quarter of the 19th century and into the beginning of the 20th. They eventually purchased just over 1600 examples. Other admirers of the Model 1876 were Tom Horn (Steve McQueen was said to have used an original .45- 75 in the movie) and Theodore Roosevelt. Some 64,000 of the Model 1876 were produced before its demise in 1898.

Looking to add a larger calibre lever gun to their range, Uberti introduced their replica of the Model 1876 in 2008. You would have thought that with today’s stronger steel, Uberti would have offered the popular .45-70 as an option for this gun, but the fact is that the original 1876 action was not suitable for cartridges over 2¼” length, so a new design would have been needed.

The Uberti website shows both the full-length rifle and the shorter carbine, but the former is the only one listed on the Henry Krank website, so Mountie fans will need to check on the availability and price of the carbine. The 28” barrel length is the only option offered by Henry Krank, and this makes for a big rifle, weighing in at over 2 lbs more than the 24” Model 1873. The extra weight does, however, help tame the recoil and the rifle is not uncomfortable to shoot. The barrel, magazine tube and butt plate are blued, with the receiver, lever, hammer and trigger being case coloured. Stocks are the usual varnished walnut, and this model uses the standard sights that are found on many of the Uberti lever-action rifles, being a semi-buckhorn rear and a blade front. All of the original calibres have been duplicated by Uberti and are listed in the Henry Krank catalogue, but check to see which are available.

Supply of loading dies and brass cases, along with suitable lead bullets if you do not cast your own, might affect your choice of calibre, so do some research in this area first. The .45-60 is probably the easiest to load for, as this is merely a shortened version of the .45-70, so only needs a bit trimmed off the longer case. Price £1523.00