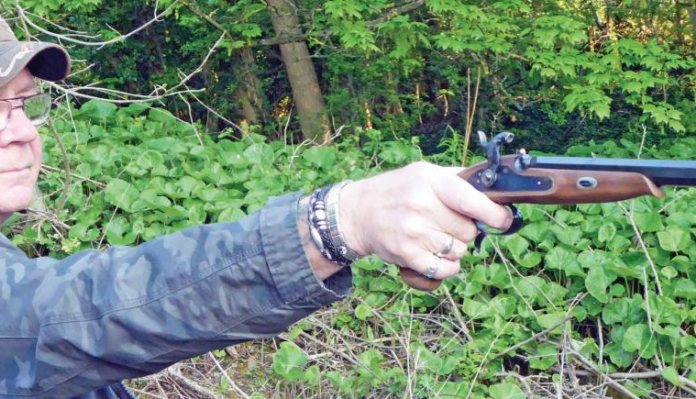 For the last six decades or so, Uberti has been one of the leaders in the manufacture of reproduction firearms based on models produced in the United States from the mid to late nineteenth century. During this time, they have satisfied shooters, re-enactors and the movie industry with their ever-growing range of both handguns and long guns. Clones of products from former industry leaders such as Colt, Remington, Smith & Wesson and Winchester have all, since the 1950s, left the Uberti factory bound for destinations worldwide. The Uberti catalogue or website will be an early call for buyers looking for a replica of an ‘Old West’ firearm, and most will find what they are looking for. With the Siber model, Uberti have broken the mould in producing a distinctly Europeanlooking pistol, aimed away from their traditional market.

Readers may be forgiven in thinking that this is a new venture for Uberti, but I came across this model as far back as 2006, and I believe it was available some time before that. Replicas of the pistol were also made by a company called Hege GmbH in Germany as far back as the mid-1980s in .33-inch calibre. Whether or not they manufactured the larger bore I am uncertain, but an article in a 1984 American Rifleman magazine shows the Hege to be almost identical, both cosmetically and proportionally, to the Uberti we have here.

The pistol takes its name from Jean Siber, a resident of Lausanne in Switzerland. Jean was a member of a family of watchmakers but turned his attention to firearms in the middle part of the nineteenth century. Information on his venture seems rather sketchy but he built several saloon or parlour pistols of small calibre, as well as examples of target rifles. Just like the watches that his family turned out, Jean’s firearms exhibited fine craftsmanship and quality, with top notch engraving and gold inlay; however, judging by the scarcity of examples around today, it would seem that his production was very limited.

There are many reproduction, single-shot muzzle loading pistols on the market, and unless you are an aficionado, then they will all look similar to each other. I see nothing visually on the Siber to make it stand out from the crowd but there will obviously be those who like its simple lines and its fit and finish.

The first thing that you notice is that the pistol does not have the red/brown gloss finish to the wood that is seen on all other Uberti guns. This one has the bare minimum of oil applied to the stock and looks like it would benefit from another couple of coats. The wood itself is a decent piece of walnut and the cut-outs for the metal fitments are sharp and precise apart from one tiny flaw around the inletting of the traditional-style decoration at the front of the trigger guard. It’s very minor but at the end of the day this pistol does cost over a grand. The chequering on the butt is very crisp and well executed and the stock has a Schnabel-type fore-end.

The 10½-inch hexagonal barrel is fitted into the stock with a hooked breech and flat key, and removal is quick and easy. The head of the key is black, while the escutcheons and their screws are left in the white. A tiny screw passes through a slot in the key and into the stock to prevent the key from falling out. With good, sharp edges and a deep, glossy black, the barrel measures 0.85-inches across the flats and has eight groove rifling with a twist of about 1 in 13-inches. The name *SIBER* (including the stars) is marked on the top flat and the only other marking that is fully visible (parts of the proof marks show) is the serial number on the left side flat. The obligatory ‘Made in Italy’ etc. is under the woodwork. The front sight, a post with brass bead, sits on a bar, which is dovetailed into the barrel and can be drifted left or right. There is an assembly number stamped into the stock and also the bottom of the barrel, possibly indicating that the parts were hand fitted before final finishing.

The case coloured top tang is held in place with a screw and contains the rear sight. This is a flat blade with a U-shaped notch, behind which is a tiny screw that operates the elevation mechanism for the sight; turning clockwise to raise, anti-clockwise to lower. The sight picture is an improvement on the usual V-notch set-up.

The trigger guard and front strap are nicely blacked, and this is an area where my love/hate relationship comes into play with this pistol. Regular readers will be aware of my dislike for these spurs on trigger guards, while there are obviously others who find favour with them. Each to his own, but when the shooter was asked to pose for the photograph, he instinctively opted for a grip without using the spur. The trigger mechanism is fitted to a separate bottom tang and the group is case coloured, as is the lock plate and hammer. The hammer nose has a ‘dolphin’ head appearance and the spur has no chequering. The pin on the mainspring protrudes through the plate and is left bright. A dab of black here would have made a difference. Speaking of the spring, it is VERY strong. This one really would close your back gate! Add to this the height of the hammer spur and lack of chequering and one-handed cocking may be a problem for some. The simple, unadorned layout of this pistol with clean lines will add to the visual appeal for many and its comfortable grip (without the spur!) and good balance make it a joy to shoot.

The Siber has a set trigger, although it can be fired without using this feature, giving a very heavy trigger pull, but it has no creep and breaks cleanly. The trigger is set by placing the hammer on full cock and pushing the trigger forward. My usual practice with any new percussion gun is to pop a couple of caps to make sure the nipple is clear. So, half cock, seat the cap, hammer back to full cock and set the trigger. Out of the box, this is the ultimate hair trigger! It took three or four tries to realise just how light this is, but it is surprisingly good to use, once you get the hang of it. Of the shooters who tried it, there was not one who was not caught out first time, despite being warned. There is an adjustment screw behind the trigger (you need a very thin rod to turn it) so users can fine-tune it to their own preference. Turning clockwise lightens the pull, while anticlockwise adds weight.

I used a charge of twentythree grains of Henry Krank fine black powder behind a .430-inch lead ball wrapped in a .005-inch lubricated patch, with ignition from Remington No. 11 caps. This is a very manageable combination, with recoil being less than a .44 calibre percussion revolver, due no doubt to the weight of the Siber’s barrel. From a rest at twenty-five yards, my best effort was three shots in a shade over two inches, not brilliant but the pistol is capable of much better than this in the right hands and with a bit of load development. The barrel was wiped after every three shots and I did not have a hiccough during the day.

Cleaning consisted of taking out the nipple and, using a small funnel, pouring boiling water down the barrel until it ran clear, then spraying a little Ballistol in the barrel and wiping with patches. When they came out clean, I ran a dry one down and then one with a couple of drops of oil on it. The nipple was cleaned in a jar of boiling water and the threads lightly oiled before replacing. The pistol was then wiped with a lightly oiled rag. It was while cleaning the barrel that I noticed the last 12mm or so, at the breech end, is a smaller diameter than the rest for whatever reason. Harking back to that old American Rifleman review I wonder if this part of the barrel is .33-inches and the same barrel blanks were used for both calibres?

I feel that this is a bit of a rare bird from Uberti, as I have printed catalogues going back many years and the Siber is not listed in any of them. The description in the Henry Krank catalogue lists this pistol as having a brown barrel and engraving on the lock plate but that is a deluxe model, whereas the one we have here, and the one photographed in the catalogue, is the standard version.