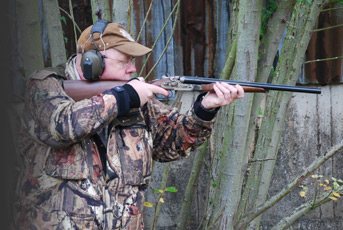 I have done a lot of different shooting disciplines in my time but perhaps the most fun and unusual was Western Action Shooting, as run by the BWSS (British Western Shooting Society). Here we not only shot firearms of the American old west; Colt 1873 Peacemaker revolver, Winchester 1866 and 1873 rifles and also shotguns, but we dressed western too. One of the attractions of the sport was the fact that you could on some stages use all three gun types. For example have a shotgun staged at 10-yards and start off with your rifle at 50 to engage some steel knock downs. Then move down with your pistols shooting paper targets and finally pick up the shotgun to finish off the course of fire. With the three different gun types adding to the challenge and enjoyment.

Of these three the shotgun was perhaps the least used but the most contentious. I say this as the quintessential sawn-off, Western scatter gun fell into its own, unique category. Initially and since the changes in the law caused by the 1988 Firearms Act that not only banned self-loading centrefire rifles, but also placed restrictions on shotgun types too. The most noted being the reclassification of pumps and autos with a capacity of more than three (two in the mag and one in the chamber) as a Section 1 firearm. Also barrel and overall length restrictions were placed on single and double barrelled guns.

However the exception to this as I was to discover was the doubles used by BWSS members. The first time I saw one was at a Thornlands match where this guy pulled out a side hammer Baikal with I think 14” barrels. He told me that his constabulary had granted him this as a Section 1 firearm purely for BWSS events, so no problems. Just to finish off, back then classic repeaters like Winchester’s 1887 lever-action and 1897 pump-action shotguns could also be used in competition as they fitted into the time line cut-off. However, they could only be loaded with two rounds at a time.

Not everyone bothered with a shotgun as there was always one to borrow at a comp or the organisers had one too. Though the purists did have their own, quite often the aforementioned side-hammer Baikal or similar sometimes cut down to suit. I recall the inaugural BWSS shoot at Redcar and organised by Bob Dunkley where a short double had to be fired from under a table to simulate a saloon gun fight. Great fun indeed…

Worldwide, Western Shooting is big business and many companies produce a diverse range of firearms to suit, sadly not all of which are legal in the UK. Pedersoli who are best known for their historical reproductions of western firearms have added to this with their Wyatt Earp shotgun. Though Hollywood might tell us that the single-action revolver as typified by the Colt Model O Peacemaker was the primary sidearm of the day, the truth is that long guns did most of the work. So you could stand off with a rifle out of handgun range or use the devastating power of a double shotgun to perhaps compensate for your lack of skill with a pistol.

One of the guns that stands out from this period is the Colt 1878, which is what Pedersoli has recreated in their usual fine style. This is your classic, double hammer (rabbit ears) side-by-side with pistol grip butt and short 20 1/8th ” tubes. Later examples could be encountered with a straight-hand butt and hammerless too. Calibres on offer originally were 12 and 10-gauge, the latter often preferred by good and bad alike for the extra payload it offered. Though Colt did make an 8-gauge for US President Grover Cleveland as a one off, Pedersoli have wisely stuck with just the 12-gauge version!

The gun was produced between 1878 and 1889 with approximately 20,000 units being made. It used the British-designed W&C Scott top lever action of 1860 and was available with either twist steel or Damascus twist steel and iron barrels. Here strips of the metal are wrapped around a mandrel to form the tubes. With Damascus being the most attractive due to the unique colourations and pattern of the finished item. However, this was in the days of blackpowder cartridges so you wouldn’t want to be putting modern, high-pressure loads through an original for obvious reasons.

The replica gun is a typical Pedersoli product, built to high standards with quality walnut for the pistol grip butt, with chequered grip and beaver tail type forend, along with a colour case-hardened action. The barrels are blued and built to handle modern ammunition and show fixed improved/modified chokings. A simple brass pin sight sits on the low rib between the muzzles. The hammers are of the rebound type, meaning when down they sit away from the firing pins, so reducing the chance of the gun going off if you dropped it and the hammers hits something hard, as they can only fully fall when the triggers are pressed. To back this up there’s a push/pull tang-mounted safety catch.

While at IWA Last year I spoke to Pedersoli and they showed me not only the Wyatt Earp, but also a sporting shotgun (Le Bohémienne) built on the same action. Though classic looking it featured flush-fitting multi-chokes in its 28” barrels so giving the best of both worlds, if you fancy that sort of thing.

As a practical shotgunner first and foremost I really appreciated what might be considered as the original practical or fighting shotgun that was the Colt 1878. For its day it must have been an awesome piece and even more so in 10-gauge. I still prefer my original Winchester 1897 pump for the 6+1 round capacity it offers, but the ease of loading and unloading drills and reliability of the 78 are to be admired too!

The Wyatt Earp is a simple gun to use as befits the design. To load, push the top lever to the right and the gun will fall open, which is useful for competitions. Drop the shells in and shut the action then thumb the hammers back to their cocked position and set the safety (pull back). With practice it’s possible to sweep both the hammers together by using your thumb across both the ears.

The gun shows a double trigger set up with the front blade firing the right barrel and the rear the left. Recoil in this shorty 7 lb gun can be a bit fierce given what ammo you use and the steel butt plate does not do a lot to improve it either. However, I did find the pistol grip improved control, certainly over a straight-hand butt with the chequering helping too. The unload is totally manual as there is no eject facility, with the fired cases being raised about ¼” from the chambers where they have to be pulled free with your fingers. Modern plastic-hulled shells, certainly with a star crimp don’t tend to fall clear when you point the barrels upright, which was the standard practice for a quick unload with the old brass-cased ammo of the period.

Though a dedicated design the Wyatt Earp is a really nice recreation of what is doubtless an iconic gun of the period. If you shoot BWSS events and want to keep it as authentic as possible then this is the gun for you.