Oversexed, Overpaid and Over Here 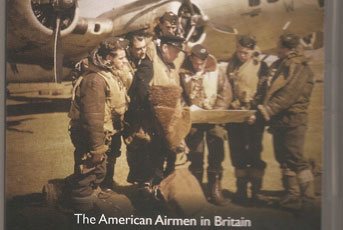 The mainstay was the B-17 ‘Flying Fortress’ but there were many other aircraft types involved in the campaign such as the B-24 ‘Liberator’ and the fighter escorts including the P-51 ‘Mustang’ and P-47 ‘Thunderbolt’. This film from Timereel tells the episode in colour using original archive footage including air to air and air to ground film. There is also some rare footage taken by the film star Clarke Gable who served with the 531stHeavy Bomb Group operating out of Wetherby and Polebrook. The tongue in cheek title comes from the opinions held by many of the British at the time, but today the veterans are welcomed back to the areas where they once served and there are some very emotional and moving scenes as shown in this fine film.  The film stock is ageing but nevertheless it is still very good and even the ground filming add something to complete the picture of the USAAF in Britain and narration is informative and clear.