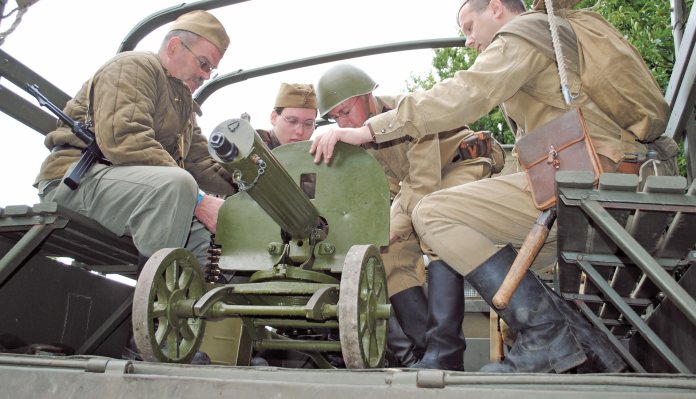 We all like to watch a good war film which really grips our attention. Looking at the numbers of war films broadcast on television it would seem that this is the most favourite of all genres in cinematography. War films, especially those based on events during the Second World War, are enjoyed by a wide audience, particularly on a wet Sunday afternoon. Indeed, such is the popularity of war films they are invariably scheduled viewing over holiday periods, and Easter and Christmas would not be the same without a showing of The Great Escape which is loosely based on Paul Brickhill’s book of the same name.

War films were popular between 1939 and 1945 and WWII was only weeks old when the first titles were released. German studios released their fair share of war films, but it was Britain’s output which dominated and enjoyed general release throughout the free world. Winston Churchill famously said: “History is written by the victors”, but he could just as easily have said the same thing about productions coming out of the film studios. The early films were rather jingoistic, full of Nazi menace such as Pimpernel Smith, starring Leslie Howard and Cottage to Let with John Mills. These films had creaky sets and lacked proper attention to detail in uniforms and weapons. This is hardly surprising because access to the correct items at the time was understandably limited. Despite this, no-one seemed to mind because it was giving the public what it wanted, which was entertainment.

The late actor Sir Donald Sinden, who starred in a number of war films, said of his role in Above Us the Waves that he “…had to re-enact a deed originally performed by Sub- Lieutenant Robert Aitken”. The film was based on the attack by X-Craft midget submarines against the German battleship Tirpitz and Sir Donald’s analogy was interesting because, after all, that is what actors do in war films – re-enact events. It is interesting to note that the role of the German Captain in this particular film was a German actor called Otto Eduard Hasse, who had starred in a German propaganda film Stukas in 1941 and was later conscripted into the Luftwaffe in 1944. Another German actor was Hardy Kruger who served in the Wehrmacht in WWII and later starred in a number of war films, including A Bridge Too Far.

Today the topic of WWII as a subject for film does not show any sign of slowing down. Among the modern films there has been Valkyrie starring Tom Cruise, Flags of Our Fathers directed by Clint Eastwood and Downfall which charts the last days of the war in Berlin continue to fuel our fascination with WWII. More recently we have seen titles including Fury starring Brad Pitt in which we are asked to believe Brad Pitt as a tank commander, even though he is far too old for the role. There have been rumours saying that war films are finished but judging from the number of latest releases there are still plenty more war films yet to come.

In the past I have sometimes compared displays to documentaries and films, because of the weapons on display. This gave me an idea to look more closely at the comparisons.

One of the best films to be released during the war was The Way Ahead which followed the transformation of a group of recruits from civilians to soldiers as they undergo training which involves the use of many types of weapons used by the British Army. It shows them on assault courses, driving vehicles and firing weapons. The film starred David Niven who actually saw active service in the British army during the war. Other actors who saw military service during the war include Anthony Quayle, John Mills and Trevor Howard, whose understanding of weapons would be useful in their roles in war films.

War films always feature a wide range of weapons, which is great for re-enactors, and some re-enactment groups have participated in a number of the modern productions. They use their own vehicles, weapons and uniforms which makes life easy for the production crew.

Technology in film production has come a long way, and today modern computer techniques and facilities allow depictions of the war to be seen as never before. For example, the harrowing battle scenes in Enemy at the Gates and Saving Private Ryan are extremely realistic. The weapons carried by the central characters and the masses of extras are authentic and the drills used have been taught by professionals. Researchers locate correct vehicles or realistic replicas. The Tank Museum at Bovington loaned their Tiger tank for the film Fury for absolute realism. Computer Generated Imagery, CGI, can fill in vast swathes, such as the amphibious landing scenes in Flags of Our Fathers and the air raids in Enemy at the Gates, but when it comes to soldiers on the ground that is where the services of re-enactors come in. Re-enactors, when working as extras on films, because of their hobby, not only have the correct weapons and know how to use them, also have the proper uniforms and kit and being versed in the drills are convincing in their actions which adds gravitas to the film.

No matter how good a war film is, there can be parts which prove annoying, such as the wrong kit being used and continuity which is out of synchronisation. With re-enactors on-hand to advise on basic things like the correct use of weaponry, including loading and firing, things can be done properly. Military advisers and special effects people make good use of the experience of re-enactors because they can help train more extras. For authenticity some of the actors in Saving Private Ryan were sent for special training to a boot camp under the supervision of Dale Dye, a former captain in the USMC. Dye’s services were used again to train the cast of the mini-series Band of Brothers which followed a unit of the 101st Airborne Division as it fought from Normandy to the end of the war.

The wrong weapons need only be in the frame for a few seconds to make a difference and potentially spoil the film. For example, in The Cockleshell Heroes, based on true events and starring Trevor Howard, German troops are shown briefly with No.4 rifles as used by the British army as opposed to the K98 of the German army. In The Battle of the River Plate Germans are shown carrying Thompson SMGs. Small points perhaps, but enough to fl aw the films. In the film Sea of Sand starring Richard Attenborough, which focuses on a Long Range Desert Group patrol, the use of assorted weapons and equipment is explained in the dialogue. In Cross of Iron the Germans are shown fighting on the Eastern Front and using PPsh sub-machine guns captured from the Russian army which is indeed accurate. Other sequences show weapons in use such as mortars, rifles, anti-tank guns and the slow-motion scene of the MG42 in action is to be admired.

War films can be broken down into three main categories dealing with all theatres of fighting on land, at sea and in the air. In Britain one of the leading actors in war films during the 1940s and 1950s was the late Sir John Mills who starred in 120 various films and who one could say was the Clint Eastwood of his day. He served as a junior officer in the Royalengineers from 1939 until discharged on medical grounds in 1942. John Mills took on many diverse roles in his career starring as a corporal in Dunkirk, a submarine commander in We Dive at Dawn, as an RAF pilot in Way to the Stars and as a prisoner of war in The Colditz Story. In each of these films weapons are in much evidence and they are correct for the time, especially Dunkirk which has all the correct weapons from rifles to Bren guns and the 25-Pounder Field Gun in the artillery sequence.

War films can be based on fact or complete works of fiction, and then there are those which unfold against a backdrop of factual events. Factual war films include The Longest Day, starring the late Richard Todd who was actually at Pegasus Bridge on June 6th 1944 as a young officer in the Ox & Bucks, and A Bridge Too Far. The film Battleground focuses on the Battle of the Bulge and the role of the 2nd Squad, 3rd Platoon ‘Item’ Company of the 327th Glider Infantry Regiment of the 101st Airborne Division. It has very good weapon sequences with the correct weapons at all levels and is spliced with original wartime film footage for greater effect. There are a few Italian-based films such as Conspiracy of Hearts which shows weaponry of the Italian army. In the past Japanese-based war films suffered from incorrect weapons, but this is being put right with films such as Letters from Iwo Jima and the mini-series The Pacific, based on the book of the same name by Hugh Ambrose.

These all had very good weapon sequences in them as do some fictional productions such as Went the Day Well?, based on a story by Graham Greene involving a group of German soldiers in British uniforms taking over a village. The weapons used in it are all accurate and the final shoot-out sequence is done with gusto by servicemen standing in as extras and their tactics, while overly enthusiastic for the sake of cinema, is very dramatic. The Guns of Navarone is a thrilling fictional story about a daring British commando raid to destroy huge German coastal guns. Infantry weapons used were good except in some scenes where the Germans are shown using the wrong weapons. A variety of American vehicles painted in German colours stood in for the real thing. However, it was the huge guns which stole the films. They were based on actual German railway guns 28cm calibre called K5 E, two examples of which still exist. One is in America at the Aberdeen Proving Grounds and the other is at the Batterie Todt Atlantic Wall Museum at Audinghen near Calais(www. batterietodt.com) which is open to visit.

Another fictional war film is Kelly’s Heroes, which has gained something of a cult status to the point where one re-enactor has fully developed Donald Sutherland’s character of ‘Oddball’ and has been seen riding a Sherman tank into battle reenactment. The film is very tongue-in-cheek, but all the weapon sequences are very good and the sniper sequence could have influenced the depiction in Saving Private Ryan. Kelly’s Heroes is further noteworthy from the fact that the characters wear the badge of the US 35th Infantry Division, ‘Santa Fe’, which in reality fought in the area around Nancy during the Normandy Campaign and later in the Ardennes.

There are just too many war films to list and those mentioned here illustrate how the quality has improved over the years. Thousands of films with WWII as the theme have been produced and we each have our favourite. The correct vehicles have not been discussed either as that is a subject which warrants its own debate. These improvements have come about as the result of better research on the part of the production team, but also due to the hard work and dedication of the reenactment groups. No doubt we will see more of them in future war films