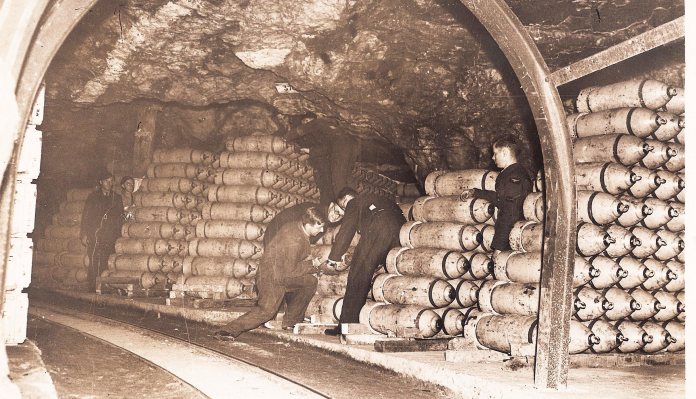 With the rise of Adolf Hitler to power and the increasing militarism of Germany by the mid-1930s, European countries, including France, began a rearmament programme. In Britain, prompted by men such as Winston Churchill, the country joined in the re-organisation of its armed forces and the introduction of new weapons and equipment.

In 1936, the British Air Ministry decided that a war reserve stock of bombs should be kept at a minimum level 98,000 tons, in readiness for immediate use in the event of war. Following the air raids by aircraft of the Luftwaffe supporting General Franco’s Nationalist forces during the Spanish Civil War, the level of bombs held in war stocks was revised to 158,000 tons. After German aircraft attacked and destroyed the town of Guernica in April 1937, the supplies of bombs held in readiness was further increased to 632,000 tons.

To accommodate this massive increase in stocks, underground facilities were prepared and greatly extended, one of which was the site at Fauld, near Hanbury in Staffordshire. Bombs were regularly taken from this site to arm aircraft of Bomber Command and everything was operating safely, until 27th November 1944. On that fateful day, tragedy struck, when a massive explosion ripped through the storage facility, destroying everything and killing at least 70 people.

Analysis concluded that an estimated 4000 tons of bombs exploded, which led to the detonation of around 500 million rounds of ammunition. The blast left a crater 750-feet in diameter and 100-feet deep. The force of the explosion also ruptured a nearby reservoir, releasing 450,000 tons of water to add to the devastation. The death toll and the devastation would have been undoubtedly greater had the force of the blast not been contained by the underground chambers. The loss of so much ammunition, whilst enormous, did not stop or even impede the bombing campaign against Germany. The weight of bombs dropped by the RAF over Germany throughout the war was in excess of 950,000 tons. The USAAF added another 620,000 ton to that figure.

That was not the only accident involving the loss of stocks of ammunition. On 22nd November 1944, off the south coast of England, a barge carrying a cargo of 200 tons of mixed ammunition, was being towed through the Channel in bad weather, when it broke loose from its tug and began to be pushed into the shore by the tide. Suddenly, it exploded, injuring hundreds of people around Newhaven in East Sussex and damaged over 1,700 houses. Several people were killed from falling masonry. It was later discovered that the barge had struck a mine laid on the shore as part of the anti-invasion measures.

Only two months earlier, on 20th August 1944, the 14,200-ton freighter, SS Richard Montgomery, whilst moored off Southend in the Thames Estuary, dragged her anchor. She was loaded with over 6,000 tons of ammunition and the tidal shift caused her to break up. A crew was sent out to her on 23rd August to begin unloading the cargo. For a month, work was carried out to remove the ammunition and by 25th September some 4500 tons had been unloaded. The integrity of the ship further deteriorated, forcing her to be abandoned, leaving some 1500 tons of explosives still on-board.

Today, 75 years later, the SS Richard Montgomery lies in around 50-feet of water and is considered a major hazard to shipping. She is under constant surveillance, declared off limits, and the cargo deemed too dangerous to remove. As a legacy of those war years, reminders do not come more dangerous than this deadly cargo.