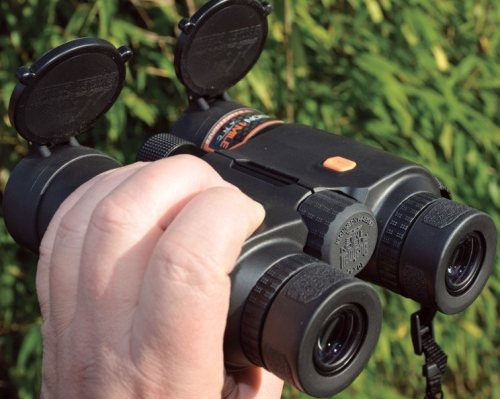 Whilst binoculars enthusiast, whether hunting, birdwatching or just appreciating our fabulous countryside, this new set from Bushnell are specifically made with the shooter in mind. The Fusion 1 Mile ARC is an advanced laser range-finding binocular, featuring a built-in ‘accelerometer-based inclinometer’, to quote Bushnell’s sales blurb, which basically means it can display not only the distance, but the exact angle of the target, and the amount of correction required in order to make the shot strike true.

Of course what lies at the heart are superb quality optics, as you would expect from this famous American brand, but built into the system is a point and shoot, laser range-finding system, which, when the are a practical addition for any outdoor conditions are right, is capable of ranging targets, right out to an astonishing one mile.

At just under 2lbs in weight, the Fusions feel very manageable, yet offer an impressive field of view, in a mid-sized format. Image quality is pin-sharp and the central focusing wheel is smooth and reassuring in operation. Once I’d attached the padded strap to the side clips and dropped the small CR123 battery into the central chamber beneath its knurled cap, the initial set-up process could begin. Press the orange button on the right and the Red Matrix display lights up to show the range-finding information. A central dot shows, which is held on the target, and when the power button is held for a couple of seconds a small extended cross shows to confirm the system is calculating the range. The actual distance figure can be displayed in either yards or metres, and the small picture on the right shows battery life.

Usage of course largely dictates battery life, yet with an auto-off feature built-in, and the guide book suggesting changing the battery after six months, I think we can assume battery life is unlikely to be a problem!

As far as general range- finding is concerned, I found an open stretch where I could conduct a clear test, and at just over half a mile I had consistent readings that came back within the prescribed one yard of each other! Distances further out were not always so easy to get a reading on, but to be fair, Bushnell’s literature does state that function relies on the size of the target and just how reflective it is. These systems calculate the time it takes for the laser to be fired at a target and then bounce back, so if a target is very small, vague, or unreflective, operation is obviously impaired. Light conditions also play a part, with duller conditions better than bright sunshine.

Overall then, a good start, but there’s added functionality with this product as mentioned, and that’s where the additional symbols come into play, within that display. As any experienced shooter will know, targets at extreme angles, up or down, can pose problems, as they are less prone to the effects of gravity, especially as the angle becomes significant. The Fusion’s system shows a direct ‘line-of- sight’ distance to the target, but also the angle in degrees. In addition, it can be set to show the correct amount of holdover, shown in either inches, cm, MOA (minute of angle), or MIL. How can it do that? Well the system relies on being pre-set with various information. Firstly the Sighting in distance ‘sight dist’ is set, (say 100 yards), and then a particular letter code needs to be entered, which represents a Ballistic Group pre- set by Bushnell. Various popular makes and specifications of rifle calibre sit within a specific code, and all subsequent calculated holdover figures, all stem from this information. (Winchester .224 22-250 Rem, 55gr. Ballistic Silvertip at 3680fps) are sitting under code ‘H’ for example, so use any of that ammo, and ‘H’would be entered into the set-up. Many brands and specifications are included, but as Bushnell point out, if your particular brand doesn’t feature, then conduct some prior testing, and pick a ballistic code where the trajectory most closely matches.

Substitute the ‘Rifle’ mode for ‘Bow’, and the system displays a more simplified ‘line of sight range’, angle of the target, and then a compensated distance to give the target, again taking the angle into account. It’s all very clever, and in use I found navigating round the display, toggling between the two buttons to enter the pre-set values, was fairly simple, once the categories were understood.

Taken as read, maybe, but Bushnell’s renowned Rainguard HD lens treatment should not be underestimated. It offers a permanent hydrophobic water-repellent coating to prevent fogging in poor conditions, by effectively forcing moisture to form in smaller droplets, and a clearer, brighter image is the result.

In short, pick these binoculars up for any use and the bright, super-sharp vibrant image really does stand out. As for the retail price of £1233, consider the cost of comparable European-made fayre, with anything like the same on-board functionality, and it begins to look positively reasonable.

Bushnell quality and cutting- edge technology were always going to impress. Add in a two year limited warranty, and these binoculars have to be a serious consideration for any hunter, wishing to push the boundaries of performance where it matters most.