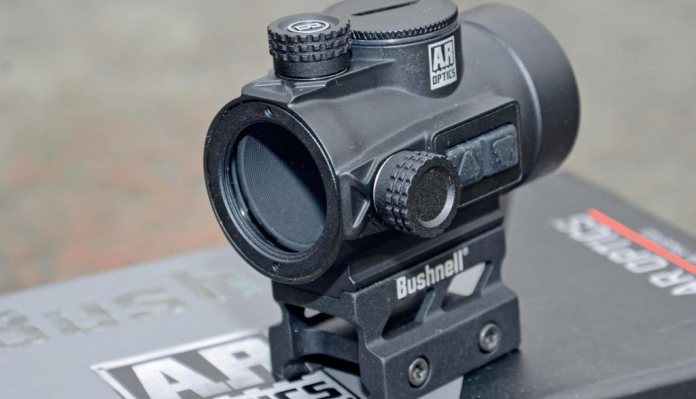 I’ve had an affinity with red dot sights from a very young age; after purchasing a second hand Single Point unit, way back in the late 70s, when that particular gem was state of the art. Termed an OEG device, or Occluded Eye Gunsight, the system used a fibre optic dot set in a tube, which was blocked off (occluded) to the eye. This system relied on the brain superimposing the dot from the dominant eye, onto the target. It’s success relies on our binocular vision.

Modern-day red dot sights allow the shooter to see through the tube, and that gives them an edge already against the likes of Single Point.

On test here is the latest model from Bushnell. It’s the AR TRS-26 and it’s a particularly neat design, from this highly respected optics brand. Neatly packaged in a padded block, the sight comes with an integral mounting base and a neat Bushnell lens cloth of the mini pouch type. Perfect for carrying in the pocket. The first thing to note is just how compact this sight actually is. At just 2.6” long and 8oz in weight, the TRS-26 is unlikely to unbalance a rifle.

With this style of sight, eye relief isn’t too important, but obviously, allow some gap when mounting on a recoiling gun. As previously mentioned, the integral base is Weaver/Picatinny-style, so, therefore, needs an appropriate rail on which to mount. I now have a Hawke adaptor rail that instantly converts dovetail to Picatinny, so I quickly clamped this into place on the BSA R10 TH that I had handy for the test. It is well worth mentioning that the mount requires a Torx key/bit to fit it.

The red dot relies on a CR2032 lithium battery (included), and this can be accessed or replaced by unscrewing the large circular cap on the top. There are 11 brightness stages for the dot, and these are controlled by the rubber-coated up/down arrows on the right-hand side. To turn on the dot, just keep pressing the up arrow. Press and hold the down arrow button, and the dot illumination turns off.

The specification is 1x26 which effectively means there is no magnification, and the viewing lens diameter is 26mm. To zero the sight initially, just unscrew the caps off the two small turrets, then adjust the top for elevation, and the side turret to set the windage, in the conventional manner. Click values are 1 MOA incidentally. One minor gripe is that a screwdriver is required to move the turrets, but on test, everything worked well.

Conditions will partly dictate what brightness level you set the dot to. That said, I found that with this sight set on level six, the dot is bright enough to be easily visible in daylight, yet show no ‘overglow’as with higher power levels. At this setting, the 3 MOA dot is also precise and crisp, making accurate shooting fairly simple.

So, what’s so appealing about red dot sights? Mount this sight, zero it in, then relax, and the big advantage soon hits home. The downside is that, with no magnification, you can’t so easily see shots appear on a target, but that ‘both eyes open’ wide-open viewing style means that fast target acquisition and full awareness of your surroundings throughout, quickly becomes the name of the game.

When set at 25 yards, a circular dot target 2” in diameter proved the perfect test. Using the BSA R10-TH Super Carbine that I had handy, I was soon enjoying an informal practise session. Taking my time and getting the dot truly central within the sights circular ‘window’, whilst at the same time centring the dot on the target, proved easy and clear, plus with 1/2” groups forming down range, it proved a satisfying experience.

Indeed, I’m always amazed at just how accurate it is possible to be, fairly effortlessly too, with this style of red dot system; to the point where I would certainly consider hunting duties, within the usual sensible distances.

The 11 brightness levels give great versatility for sure, and if you opt to shoot on a very low brightness setting, it’s even more likely that you’ll eventually put the gun away having forgotten to shut the power off. Infuriating, and so easily done. Well, fear not, as Bushnell has allowed for us dopey types! Power automatically switches off after two hours, which is a great feature, and with personal experience of going to use an illuminated dot or reticle, only to find I’d forget to close down last time out, this is a very welcome feature.

This model also has a longerlasting battery than previous models, and with a stated life of 30,000 hours when used at the level 6 brightness setting, that’s some boast for sure.

The TRS-26 is waterproof, nitrogen-purged (so fogproof), and shockproof. Overall then, a nice piece of kit, that’s versatile and fun to use. A little more expensive than some rivals, but the Bushnell name always brings added reassurance.