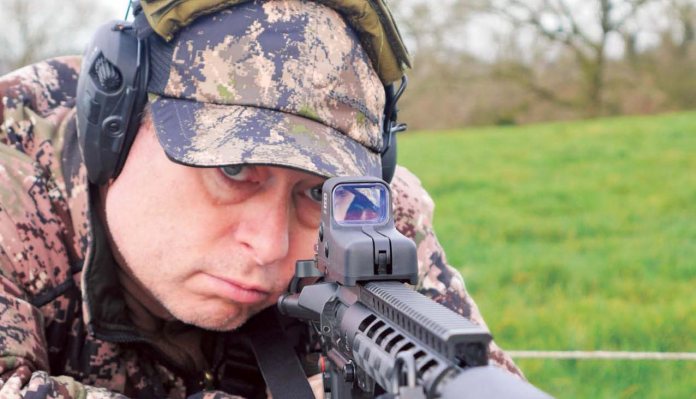 Eotech’s HWS (Holographic Weapon Sight) is an icon among tactical optics. Immediately recognisable by its rugged L-shaped profile and unique ring-dot reticle, its technology is also in a class of its own. Every other red dot sight uses the century-old reflex system, in which an LED projects a dot onto a curved screen with a semi-reflective coating. In most cases, this results in a fat, fuzzy dot and a tinted image. By contrast, Eotech reticles are holographically imprinted within a flat window made of laminated glass, resulting in a clear, tint-free image and a reticle pattern featuring an exceptionally precise central dot.

Most of Eotech’s products have been developed for the military market, and duly sport an alloy hood for extra impact protection, an NV button providing ultra-low brightness settings for use with NVGs (Night Vision Goggles), a QD Picatinny mount for tool-less removal, a transverse battery housing to minimise rail space, and side-mounted brightness controls to facilitate use with a rear-mounted magnifier.

The 502.0 model on test here is different, being designed specifically for the sporting market. That means keeping weight, bulk and cost down; and explains the absence of the protective hood found on other models. I suspect Eotech have consciously opted for a classic look, too, since 502.0 is the spitting image of the original 1996 Bushnell version, with the controls at the rear, a long ‘bonnet’ at the front to hold the two AA batteries that power the sight, and a discreet hex-head screw to secure it to the rail. Differences are a neat, foamlined, hard plastic transport case – in place of the old cardboard box – and a much longer run-time of some 2200-2500-hours. (Reflex sights will run for a lot longer because LEDs require much less power than lasers.)

The HoloSight also offers an impressive intensity range over 20 individual settings, accommodating both dim interiors and bright daylight. Adjustment is easily and quickly made via a pair of low-profile rubberised buttons marked with UP and DOWN arrows. Pushing either button turns the sight on, and pushing both at once, turns it off. When reactivated, the sight will return to the last brightness setting. It also has a dual auto-shutdown function: using the DOWN button to turn the sight on sets shut-down to 4-hours, whereas with the UP button it is 8-hours.

The windage and elevation dials are set into the R/H side of the housing and show 0.5 MOA gradations, with the direction clearly marked on the dial. They also have quiet and softly tactile ‘clicks’, and feature broad slotted heads that are designed to let you adjust your point-of-impact with the rim of a cartridge case. Let’s face it, if you don’t have one of those handy, you won’t be doing any shooting!

Another standout feature of Eotech’s is the size of their viewing window. Reflex sights typically widen the field of view with small screens and thin housings, but the Eotech’s holographic technology both requires a bigger window and takes full advantage of its size to accommodate a fully-featured reticle.

Several reticle variants are offered across the Eotech range, but the 502.0 uses the classic A65 pattern with a single 1 MOA dot inside a 68 MOA circle with hash marks at the four cardinal points to help eliminate cant. Dimensions are based on 62-grain 5.56 loads from an AR-type rifle, so that zeroing the central dot at 50-yards gives a second zero at 200-yards and places the POI at 6 o’clock on the circle at 7-yards.

It’s at the intuitive level that the reticle design really scores; the big, bold circle makes you instinctively centre the target, then focus on the central dot, make your fine adjustment, and shoot. This provides a degree of speed and precision you simply can’t get from the basic 3- or 4-MOA dots found in conventional reflex sights.

Turned up, the reticle glows and softens, but turned down it resolves into a constellation of pinpricks. So, use it bright for fast, close work but dim it for deliberate shooting at longer range, because with the central dot just visible on the target the Eotech becomes a genuine precision optic.

I’ve never shot a 100m MOA group with a regular red-dot sight, but I’ve shot plenty with an Eotech, even without the benefit of a magnifier.

Eotech reticles are perfectly suited for use with magnifiers, too, because regardless of the magnification, the central dot always subtends 1 MOA, giving a degree of precision that red dot sights can’t match. For example, placing an X3 magnifier behind a 2 MOA dot gives you a 6 MOA dot.

That said, the 502.0’s rear-mounted control buttons aren’t ideal for use with a magnifier, as they require about an inch of space behind the sight for easy operation. This also means the sight has to be mounted an inch or so further forward on the rail and further from the shooter’s eye. Everyone will have their own preference regarding this, but I find the reticle gets easier to acquire the closer I mount the sight, and also like to give myself the widest possible field of view.

For 2020, Eotech have just launched a no-frills, entry-level magnifier, the G30, priced at around £300, which on the face of it would team up well with the HoloSight. Unfortunately, one of the ‘frills’ it lacks is a STS (switch-to-side) mount – essential to make deploying/engaging the magnifier as quick as operating the throw lever on a conventional LPVO (Low Power Variable optic) scope.

This brings us to the question of what kind of shooting the HoloSight is best for. Driven hunting is an obvious candidate as it prioritises fast target-acquisition and tracking over magnification. Also vital, however, is a consistent mount that aligns the shooter’s eye with the reticle. Previously, this meant designing red dot sights with the lowest-possible profile to match the low combs found on classic driven rifles. Nowadays, though, rifle manufacturers are responding to the popularity of high-magnification-factor (X6-X10), illuminated-reticle scopes for driven shooting by marketing rifles with height-adjustable combs. This is clearly good news for the HoloSight, whose high-profile (obligated by the geometry of its laser-hologram system) ceases to be a drawback.

Another possibility is practical competition with either rifles or shotguns. In-line AR stocks perfectly complement the sight’s dimensions, the illuminated ring is well-suited to centring an IPSC target, and the lack of a protective hood isn’t an issue for civilian use.

In any application, reliability is paramount, and the Eotech is a palpably topquality device with a rugged build, consistent tracking, and batteries that are inexpensive, widely available and simple to install. Eotech, and their UK distributor, Thomas Jacks Ltd., provide excellent aftermarket support, too, and every Eotech sight comes with a two-year manufacturers’ warranty. Best of all, you get that uniquely intuitive and versatile reticle and the special pleasure of owning a classic modern icon.