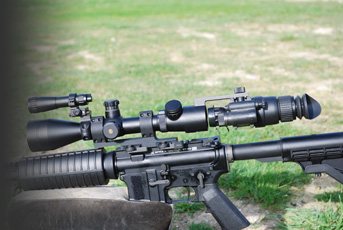 For me 2010 has been the year of night vision (NV) and is probably the first time I have taken a long term and hands-on look at what is on offer. Up until now it has all been dedicated scopes with three standard image intensifier (II) tubed types in Gen 1+, Gen 1 Super + and Gen 2 +  followed by the new Pulsar N550 Digisight. Of these four I think the N550 impressed me the most, though as I have stated in previous articles; compared to a day scope and lamp in terms of optical ability; I do find NV a little visually disappointing…

With this in mind I thought it about time I tried an NV adaptor that can fit to the rear of a day scope, as I reckoned it might give the best of both worlds… This came from Night Vision Gear UK in the form of the ATN Night Spirit monocular. This is a Gen 2+ unit (with new manufactured tube) and x3 magnification, integral IR illuminator and the ability to swap to an optional x1 objective lens (among other things) so it can be used with a day scope.

Mine came with the x3 and x1 lenses, scope fitting kit, Laser IR projector and adaptor and weighs 15oz and is 8.2” long. The unit features front and rear focus, rubber eye cup and a simple, 2-position, rotary switch that controls the ON/OFF and integral IR. Power comes from a single CR123 battery (30-40 hour operating life) or a single AA cell with a 15-hour life. As a stand-alone observation device with the x3 lens it gives a crisp and clear (green) picture and represents a highly cost effective viewer.

The adaptor is a socket that clamps over the scope’s eye piece bell and comes with a series of inserts to accommodate diameters from 37-43mm. Coming off this is a rail that the Night Spirit screws to. The on-board IR cannot be used as it’s too close as the beam bounces back off the turrets etc. So a Picatinny, body tube adaptor is required that allows you to mount a separate IR projector forward and clear of all obstructions. The beauty of the system is that the Night Spirit can be easily removed/replaced as required. Before we go any further; if your scope is illuminated take out the battery, as an accidently lit reticule will totally obliterate the view!

For the test I used a Howa 1500 in 223 Remington from Highland Outdoors’s Dream It, Build It package also tested this issue. The initial problem with a rear-mounted unit like this is head position as it will add to the length. This was partially solved by slightly extended scope rail, which give about an extra 1 ½” forward, plus pushing the scope so the saddle butts up to the front ring.

Next is the scope, as it must have some form of side or front focus. I used two makes here - a Leupold LRT 4.5-14x50 with M1 turrets and the Night Force NXS 3-15x56; both top quality brands. The mandatory positioning as far forward as possible throws up questions on stock choice and initial zeroing. I used a Blackhawk/Knox Axiom with CAR15-type telescopic butt and a Hogue, rubber, over-moulded (fixed butt). My thoughts being the Axiom would allow easy NV ON/OFF use due to the variable length of pull, which it did. Though the Hogue was not a problem either, with only a bit of neck stretching to get the sight picture.
Using Norma, 50-grain V-MAX loads the Howa was shooting an inch high at 100 yards and printing 3/4” groups. This would allow a single point of aim out to 200-yards. With the day scope sorted it was time to wait until dark to set up the Night Spirit and confirm zero.

It was just a matter of adjusting the rear and front focus on the monocular to get the best reticule picture. This was still a tad fuzzy but workable and in each case you could see the Mil Dots reasonably easily. But no way was the view as good as it was when using the mono as a hand-held, night observation device (NOD). Hardly surprising given all that extra glass it has to see through… Despite the extra 8” of rearwards length, head position was not that bad and reasonably comfortable.

I had been advised that a power of around x8 - 10 would be best. You can wind the mag to full and still get an image, but I didn’t like the reduced field of view from the high magnification. For a zero target I used a big cardboard box with a torch taped into one end and punched a small hole in its front face. This gave me a highly visible aim point and instant fall of shot indication. Pre-zeroing in daylight (less Night Spirit) saved time and ammo and this was a mere group confirmation exercise. However, group size increased to around an inch, which was hardly surprising given the reduction in clarity of image when day scope and NV are linked. But overall; more than good enough!

For illumination I tried two units - the four power LIR80AP IR laser illuminator and the Genesys LED IR illuminator. Carl Moore (no relation) of Night Vision Gear UK said the Genesys is a better choice for when the Night Spirit is being used as a hand-held viewer, but the adjustable laser is far better when using it as a scope add-on.

On that point the Genesys ring mount features an internal gimble bearing that allows the laser to be set to create optimum illumination given target range, angle and even close cover that might reflect the beam. This is done by slacking off a single screw and I found that it’s more practical if you leave some movement in the mount to hand-adjust as required.

The first night out was near ideal conditions, showing clear with a full moon on a stubble field. I was hoping for a fox, but that did not happen, fortunately there were roe deer out, which proved near perfect test targets. No I did not shoot them, as that is illegal, but using the rifle unloaded gave me a lot of useful feedback.

I could see right to the tree line at 450 yards, but with no ability to pick up any detail. I reckon I could just see a deer at 225 yards (just) in these conditions thanks to the IR bouncing off the eyes. At 200 they became more visible and if legal quarry with NV I would have taken a shot. Obligingly one animal came in closer so I got to see how it looked at 175, 150 and 100 yards too. Ranges are accurate as I had a lamp with me and simply turned it on and pinged the animals with my laser range finder.

Hares can be spotted out to 200-yards (just) but too far to shoot due to their smaller size and wholly indistinct shape; however I was able to engage these at 150/160. This performance indicates to me that you could probably see a fox at 200 and have a go with a good chance of success. Below that distance; no real problems in making a kill.

Getting Your Head Around

Most interesting was the acclimatization of brain and eye to the NV optic. Initially objects were hard to discern accurately, but with more use you kinda’ got your head around it. Plus I found a more peripheral view tended to give better observation results and I only centred the eye/target/reticule for the shot. Another physical aspect of the monocular over a dedicated night scope was the lack of eye strain after use, with none of that feeling that someone has just shined a searchlight in your eye…

Overall I was most impressed with the ability of the Night Spirit and - given the NV gear I have used before – I reckon it suits me better than the same spec in a dedicated unit. Priced at £1099 it’s cheap and you also have a hand-held NOD if required. However you will need to add on the mount and a decent IR illuminator. Overall you can get the lot for sub - £1450, which is good. Oh yes; you need to be in possession of a scope with parallax ability and a medium/thick reticule is better suited to the job. Both the Leupold and Night Force did well but we are talking a grand+ for each and I wonder how a lesser optic might perform, which is worth checking out…

I have to say that NV shooting is becoming addictive and the ability to go day/night on quarry really opens up my shooting options. My thanks to Carl Moore (Night Vision Gear UK) for the loan of the equipment and his help and support.