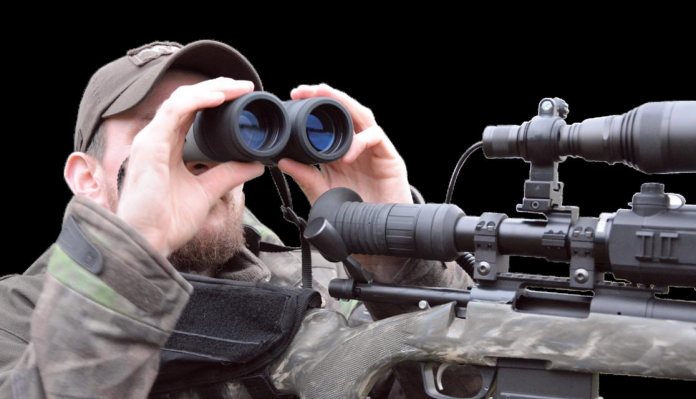 ATN’s Bino X are the latest generation of lower priced night vision binoculars that give daylight AND night time functionality with a full digital setup using an IR camera and internal video displays to allow quarry visibility. The big advantage of digital systems is that they are for starters, a lot cheaper, but perhaps more importantly, they can’t be damaged by allowing an overexposure to daylight as intensifier tubes can.

The Bino Xs are comparable in both weight and size to a premium roof prism 10x42 unit and weigh 910 grams, complete with strap. Three CR123 batteries are supplied to power the internal cameras and screens, as well as an IR illuminator. These fit underneath a flush fitting panel in the lower left ‘tube’, just behind a standard ¼-inch UNC threaded insert allowing the attachment of an extra IR illuminator or fixing these binos to a tripod or similar. The right side ‘tube’ has a rubber dust cover to protect a slot for a Micro SD Card of up to 32MB storage capacity and Mini USB leads for downloading to a computer.

There is no intraocular adjustment to account for the gap between your eyes and although they fit me okay at 63mm, I would suggest making sure you are comfortable with it before purchasing. Holding the power button down for a few seconds turns the internal screens on and the right lit up slightly before the left but only by a second or so as the internals took about six-seconds to display a visual image from the camera mounted in the right side tube. There are six control buttons in total that operate all menu screens and camera/ zoom functions, the usage of which is reasonably intuitive, although gloved hands will find the recessed buttons a bit fiddly.

With any of the menu screens lit up, focusing the eyepieces is the next step, ensuring both eyes are in turn seeing the internal display without any blur. This is pretty straightforward and no different to a riflescope reticle for example and once set, didn’t need altering again unless another person wanted to use the binos. Two rubber collars are wrapped around the objective ends of the tube to correct image focus, although the left one is a dummy, as only the right ‘tube’ carries a camera, the left side is actually the IR illuminator. I set them for 100-metres and left pretty well alone unless I was using them at noticeably closer ranges, as the depth of field was pretty good and to be honest, you could move a long way away from 100-metres and still be able to gain acceptable focus relative to the image detail anyway. They will easily focus down to less than five-metres and control is fairly precise, it needs to be at very short distances where depth of field is noticeably more important below 50-metres.

The image does show a little grainy texture yet in full daylight, was surprisingly good for picking out movement but not the equal of a set of £200 binoculars in terms of detail!

I had no problems setting up date, time, brightness etc. and adjusting controls for camera/ video usage. 4-16x magnification is available and it’s controlled by the fore/aft pair abroad the centre `enter` button with the left and right pair initiating photograph or video recording with a single push. Everything on the earth is somehow HD these days and the Bino Xs were described no different and for me, the fact they could be used in daylight meant for my favoured afternoon/dusk/ dark shooting trips mainly on rabbits, I could pick up movement at 120+metres but detail remained a little obscure. I left them on 6-8x magnification most of the time, as unless you tripod-mount them, 16x is very shaky when held in the unsupported hand but that’s true with any optical spotting tool.

As dusk descended, the ATN’s really started to get interesting. They were okay in daylight, but nothing magic; but as the light fell, wow, we really were in the twilight zone. The image brightness left the regular optics far behind and you often pulled the ATN’s away from your eyes to be a little shocked at how dark things had become. I was still easily spotting movement against the hedge line and clear view of bunnies on open grass paddocks. Re-checking with my £2000 Minox found nothing visible and a few minutes later my £2300 Leicas couldn’t see these rabbits either. I stayed off the rifle as I wanted to watch these rabbits, not shoot them for now!

At this point `daylight` mode was still in use and as the image began to suffer as it got really dark, it became very grainy and was clearly time to flip settings into ‘night’ mode, which was a second’s work to change the screen to the familiar green shades of NV. As the darkness deepened, it was possible to pick out the bright dot of the on-board illuminator and this helped spotting at airgun and 22 rimfire ranges but on a clear moonlit night with rabbits, the eye shine wasn’t that obvious far beyond the range you could pick out bodily movement anyway. I was using the Bino X’s alongside a .223 rifle equipped with a Yukon Photon 6.5x optic, accompanied by a Tracer LedRay F900 mounted to `zero` with point of aim at 125-150-metres and this was the tool that made the difference. The F900 is easily controlled with brightness a mere flip of the lever away and great focusing control. As my friend and I both wove back and forth across the paddocks to test the combined ability of the two units, it was great to see how the IR projected from the gun lit up the rabbits and gave far more eye shine to initiate identification from body shape and gait. At 75-yards, I could differentiate a pair of Partridge among three rabbits on shape detail alone and this capability allowed me to begin gaining confidence in the Binoculars, as NV shooting is a whole new ballgame in terms of balancing confidence with safety.

The new ATN Bino X utilises the Obsidian core as found in the ATN X Sight day/night vision riflescope and here, this also enables image stabilising but I preferred to keep the magnification reasonable, which allowed greater field of view. There is a compass fitted but I didn’t use it, as it was not accurate. Wi-Fi is built-in for connecting to a remote display and for free software updates for apps and firmware.

Starting and stopping photograph and video functions was fairly easy with an immediate fingertip response and I found it very useful to video and review footage of a fox peeping over a hedge towards us while we were mainly concentrating on rabbits.

It helped me show a newer shooter what to look for and was an interesting talking point when discussing what is and isn’t visible in terms of backstops and knowing your land, so a definite plus-point safety training wise.

For pure precision of use, the Bino Xs really paired up well for shooter/spotter teams when engaging rabbits out to 125-metres and although I won’t shoot at eyes peeping through a hedge, the Bino Xs clearly showed the presence of a fox at 150-metres when the illuminator lit up eyes and the shape of its head could be made out. Still photos and freeze frame of video picture don’t quite capture the way your own eyes and brain track movement of the tiniest amount for mere seconds that morph a mere silhouette into life but I liked the ATSs and thought they were well worth the money. My first high-quality foxing riflescope and lamp cost me well over a grand 15-years ago and with this setup (Yukon Photon/BinoX/ F900) at around the £1200 mark, I think It’s great value. It doesn’t help to teach or learn the same skills as lamping did but it does teach a new skillset for the equipment of the latest generation and I can hardly see it faltering now after becoming so effective, with such value for money so quickly. Being digital, the auto refresh rate on the internal screens can be tiring on some products but not here, and yes, although grainy, the image really did allow a significant number of rabbits to be spotted and controlled.

Given the likely hand-supported nature of the product, the photo function was of lesser use than the video and when viewed afterwards rarely seemed to capture the moment after dark, although definitely of more use in daylight but after dark, the video came into its own.

Battery life seemed good, and although I tended to keep them turned off for longer waits, the estimated four-hours run time was totally true, but as always, IR, which you will be using after dark, will rob from that significantly and I would have preferred AA batteries as these seem to be the currency of NV kit these days and I have tens of them charged and ready to go.

The Bino X is a well thought through piece of kit and the video capability is a great learning tool. It’s good at night but awesome at dusk and the underside mount allows extra IR to be added if required. The lack of intraocular adjustability might be a problem for some people but this is a big factor in the price and control buttons aren’t easy to operate wearing gloves. Apart from these two minor issues, this is a very capable unit, especially with an added IR unit installed.