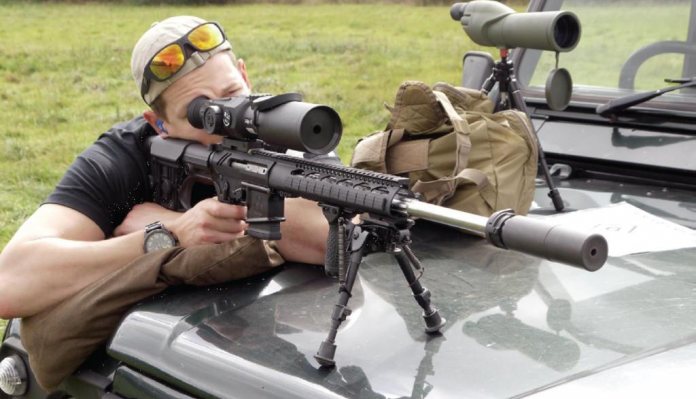 In the October issue, I started looking at ATN’s new and improved X-Sight, which is a digital day and night optic. Clever as it combines two scope systems in one package, which effectively means you no longer need a dedicated night rifle. The Mk II version is a quantum leap forward over the original, with much improved optics and facilities!

This month, I’m concentrating on its daytime use, as there’s a bit to get your head around. Initially, I think I saw the X-Sight as a digital night scope with a daytime capability, which is not the case. One aspect of the design is undeniably true though; as when compared to a conventional glass, day scope image quality is not as good. Regardless, the simple fact is it’s doing two jobs pretty well, so is up to task.

Before we start, I’d recommend you download the 47-page manual off ATN’s website, as you will need it for reference. My scope is the 5-20x85mm version and everything on it, apart from front and rear focus, is controlled by a keypad, which accesses a large and easy to use menu. I did basic set up last month in the October 2016 issue of Shooting Sports.

There are seven reticle and colour choices. Start by pressing the centre button on the keypad (ENTER) which accesses the menu carousel; then scroll to SYSTEM SETTINGS, which has a spanner icon and press ENTER. This button is used for accepting choices for all needs. Scroll to DISPLAY, then select RETICULE STYLE, which is sub-divided into shape and colour, pick what you like, then select and exit. Probably the most useful pattern is a sort of Mil-Hash cross with hash marks, as it allows holdover and windage. With colour choice there’s no black; the nearest being a dark grey that does not seem to work for anyone; red, green and yellow seem top choices but that’s just me!

Zeroing uses a moving image reticule. Exit DISPLAY and scroll to PROFILES/ZERO and select ZERO FUNCTION. You will see your reticule with a white cross superimposed on top of it; keep the white cross on your point of aim (POA) and use the key pad to move your reticle to the point of impact (POI). Sounds simple but you do need to keep the rifle as still as possible! I used my SGC Speedmaster in 223 Rem and found the most stable position was off a bench with a bipod and the butt supported.

I selected the Mil-Hash option but when moving it I found it harder to place and see the POI, so switched to a simple cross, which was easier. You can switch back and forth to any pattern you like with no zero loss.

Remember to hold the white cross on the POA and move the reticule to the POI, if you get it wrong you will be that distance/angle away from the hole. Once set, press ENTER and you’ll get a menu; pick the SAVE & EXIT option and you are done. However, what you cannot do is to set the zero position high, as you can with a glass scope. For example, with my day scope, I can set it 1.5” high at 100 yards, which gives me a 200 yard zero, simply because you can physically offset it, not so with this system!

You also get the opportunity to save ballistic profiles, which is useful. Stay in ZERO FUNCTION and you will see a menu that allows you to enter your current ballistic data: drag factor, ballistic coefficient (BC), bullet weight, muzzle velocity, zero range and sight height. Also good, you can create more than one profile; for example you could use the same data and create a number of different zero points/ranges. In this way it would be easy to switch from one to another. Or separate profiles for different rifles/calibres.

Once you have set up your various ballistic profiles, they can be used with ATN’s Smart Shooting Solution. This will automatically factor in range and wind etc and calculate the drop required and apply it to the reticle. But first you will need to know how far away the target is, which can be done in two ways. Integral is a stadiametric measuring system, which uses a series of known, vertical measurements, which you then bracket the target, and then it works out the distance.

The X-Sight, being intended for hunting, offers four pre-sets for four animal types: deer 5.9 ft, brown bear 5.2 ft, wild boar 3.6 ft and grey wolf 2.9 ft, all very American! All must be considered average heights; if there is such a thing with animals! There is however a manual entry option, which allows you to input a specific known measurement.

For the stadiametric option, select RANGEFINDER and then set the required height, say 5.9 ft for a red deer. Now view the target and a line will show with an arrow pointing down from the top, you then place the line on top of the target and press ENTER. Keep the rifle/scope still and it will take a number of readings, and then flash when it has completed. Then the same line, but with an upwards arrow appears and is placed at the base of the target and you repeat the process then the range will appear in the view (top left). The system works but very much relies on you keeping the rifle/scope still and measuring correctly. Distance entry is on the carousel and once selected input the range by UP/DOWN buttons. Annoying is the fact it’s all in feet and not yards, as it takes longer.

Though an onboard rangefinding suite is certainly useful, you have to input the height if you don’t know what animal might turn up. For example, if you are after muntjac, which is say 2 ft tall and a roe pops up, which is about 3 ft and if it’s a long way off you are going to have to go back in and adjust the settings, which takes time. Equally so distance entry, as you have to range the target then input that data. Practically in the field, the best method is a separate laser rangefinder and knowledge of your drops and holdover.

The Smart Shooting Solution is accessed on the menue with the SHOOTING SOLUTION icon, which has to be selected then turned on. Once on, the icon is displayed top right in the view. In this mode, all you need to do is to input the range (either method) and it will do the rest. The first time I tried this I could not access the icon and when I got home I had to re-download the firmware and it appeared.

The trick with the X-Sight is practice, practice, practice to get familiar with its many functions. Visual acuity is not as crisp as a glass day scope and on a bright day I could just about make out the zeroing targets I used at 200 yards, but could not see fall of shot or a clear aim point. I found the hi-viz Shoot-NSee target solved that and my Speedmaster was putting in some decent groups at 200 and 250 yards. It had no problem picking up animal shaped/coloured targets out to 300 yards and I would have felt confident out to that distance. Magnification is controlled by the UP/DOWN buttons and only operates with constant pressure so it’s too easy to run past a setting. Better would be single press increments!

The Mil-Hash reticle has vertical 1” spacing at 100 yards, so is a good bet for holding over regardless of range; don’t forget that figure is cumulative, so at 200 for example the spacing will be 2” and 3” at 300 yards. For closer work, a plain cross or centre dot works well. One pleasing aspect of the X-Sight is that it’s not affected by heat haze, being a camera as opposed to a see-through, lens-filled tube. It was a hot day and we shot a lot but had no problems as you would on a conventional optic. As I discovered, the view and image crispness was much improved by fitting the lens occluder, with or without extension tube.

As I said when I first started testing, I thought the X-Sight more an NV scope with a limited daytime ability. But I have now re-thought that considerably and consider it a practical, combined day/night optic. OK, there are better, conventional day scopes but it does the job to an acceptable standard and at the flick of a switch can seamlessly transform into an NV optic, with no changes to zero etc. Plus the price is excellent for what you are getting! As a reviewer I’m naturally cautious of anything new, but so far the X-Sight is winning me over. Next Month – into the dark and final thoughts!