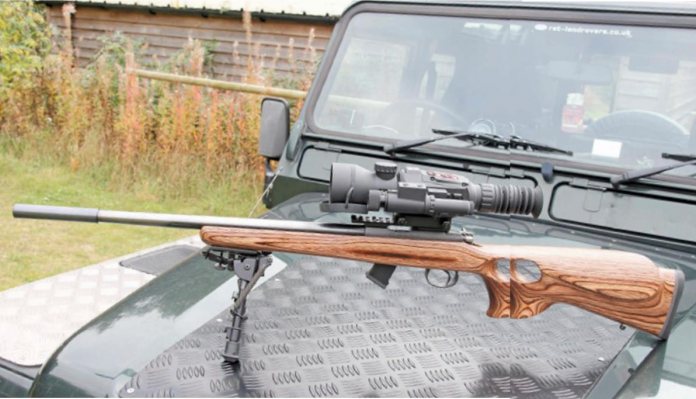 Now is the true test for the new X-Sight, as its real appeal is the fact that it offers both day and night ability. Compared to my original 3-12x50 it’s far superior in the day, even though it’s not as crisp and clear as a conventional rifle scope. Given it’s primarily a ‘camera with a cross hair’, that’s not surprising. However, night use is a far more unforgiving environment, as we shall see.

Accessing NV mode is simple; press the centre button (ENTER) for the menue carousel and scroll right and find the icon - a white circle cutting a white ring, ‘NIGHT MODE appears top left of the screen, then press ENTER. You’ll hear a click, which is the cut filter switching over the NV mode. Now you have the choice of two colour modes, WHITE or GREEN, and three different levels of light intensity – LOW, MEDIUM and HIGH. In each case you press ENTER to access the option then toggle up and down, then ENTER to select, as with other functions. Please note that whatever normal shooting functions you have set up for day use will not change as in reticle shape and colour, zero profiles etc. Plus, you can still range find and use the ballistics package, along with the still and video camera and Wi-Fi.

The occluder cap, which improves focus and depth of field for day use, should be removed to allow maximum light input. ATN supply their IR850 (850mW) long range, infrared illuminator, which fits to the single Picatinny rail on the left of the sight body; to be honest, it could do with a couple more. It offers four adjustment options; first small Allen grub screws in the front allow some movement of the beam, so that it can be centred within the view (Allen key provided). Second, at the rear is a slotted collar, which can be slackened off with a C-spanner (included) so you can position the control pod where it suits you best. Thirdly, the objective lens can be rotated to adjust the beam width for long or short-range use.

Winding it in widens the spread and screwing it out narrows it; essentially a ‘spot to flood’ function! Finally, the control pod consists of two small buttons that are pushed simultaneously to switch the 850 ON and OFF. When ON, a green light appears at the rear and pressing the buttons individually adjusts the output; front + and rear -. Power is supplied by 2 x 123A lithium batteries.

The choice of screen colour is another tricky one. In either case the targets show up as black, with their eyes reflecting the IR source. Flicking between the two at various settings finally convinced me that green worked best for me, as I feel it gave better target acuity and clarity, though it also gave a generally darker/duller overall picture. White seemed less focused but brighter with that effect like a miniature, swirling snow storm, which seemed to de-focus the image to a degree!

One of the big issues with any NV optic is the weather, as things like mist, rain, moonlight and cloud cover can all affect performance. You must also take into account your input; for example you might set the illumination and light sensitive too high or low? Equally, there’s an urge to use too much magnification, as the more mag you dial in the less sharp the image becomes. I found for most needs the minimum of x5 works well, with perhaps a maximum of x8 at the top end!

I’ve had the X-Sight out on many different evenings but two show the differences. Two months ago when it got dark latter and with a waxing moon with no cloud cover I was observing rabbits out to 250 yards using the supplied IR850.

The moon certainly aided general illumination, but even with the IR focused down to a tight spot I could make out shapes and eyes but detail was not good enough for accurate shooting. I then fitted my Night Master X-Searcher IR torch and the difference that made to view and target ID was much improved, though it’s much larger and increased weight noticeably!

Two months later on a full dark, clear and moonless night, I was spotting rabbits from 50 out to around 100 yards with the IR850, all of which were shootable distances. I was picking up eyes at 150+ but target ID was not good. Switching to the X-Searcher showed them to be recognisable as both rabbits and hares. In all cases, apart from perhaps at 50 yards or less, I found that my sight picture was not as good as it was in the day! To be honest the image in ATN’s manual of the wolf in both green and white NV modes is shall we say; a slight exaggeration of how things look in real time! But that is to be expected, as you have to blow your own trumpet to a degree!

Other factors that affect any NV optic are the amount of illumination required and I found it all too easy to over-light a target, which consequently degraded the image. Reticle choice too is critical, for daytime use I went with the multi-hash cross hair, which gives 1” drops between the vertical stadia at 100m and is certainly a good choice for medium/ longer ranges. However, at night it’s way too cluttered and if you pick the wrong colour it tends to obscure the target too much, especially given the limitation of night optics in general. In the end I opted for the far less cluttered open cross with dot centre and that improved both target view and acuity.

I admit that I never saw a fox or deer at night; not that I could have shot the latter. But larger animals are going to show up better as they have a bigger visual signature, also making them slightly easier to identify too. Plus shooting distances at night are much reduced for both safety and practical reasons, and if you can’t properly ID your target then perhaps you should not be shooting at it, as and more importantly you have no real idea of what’s behind it either! Which is perhaps more of a concern? Sticking my neck out and with the right lighting and conditions I’d say rabbits and hares out to 100/150 yards with a rimfire and foxes out to 150-200 with a centrefire, both dependant on weather conditions, the IR illuminator used and scope settings! For day use I’d reckon 300 yards is easily possible with a full bore!

I have to say I like the new X-Sight, as generally it represent a highly cost-effective and versatile design and its optical HD Package is a vast improvement over the original. However, and this is a personal thing, I feel it has too many facilities, the majority of which I know I will never use. For example, I have no interested in Geotagging anything, nor sending my images and videos to another viewer. The accelerometer; well how fast I’m walking is of little concern either! Though the rangefinding systems etc work they take time, which is at a premium when the quarry is in your sights. I would hunt using a separate laser rangefinder instead and shoot by simple holdover!

However, on the plus side, optics are good for a digital and the option of choosing reticule shape and colour is certainly useful, as is being able to set up and store separate ballistic profiles. The one touch still images or video recording is also useful and yes I do like that ability; even though I don’t want to send them anywhere! I’ll paraphrase my good friend Andrew Johnson, who is a noted technophobe who put it simply: “why don’t they get rid of all the fancy stuff and put more money into the stuff that really matters!”

You may disagree on the ‘fancy stuff’ and if so good luck to you, as you might feel the functions I have no use for appeal. I’m 64 so less in tune with what younger shooters might want from a smart optic and if ATN is aiming their product at this ever-expanding sector, then they are right. But one thing is undeniably true; the X-Sight is a true day/night sight system that actually works in both roles up to a more than acceptable level. Plus, prices are very good for what you are getting.

My thanks to ATN for the loan of the X-Sight