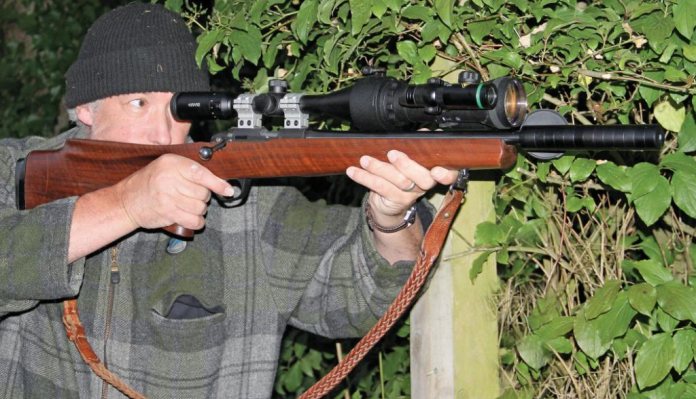 With night vison (NV) equipment, you have several options in their use and mounting. You can now choose between a standalone sight i.e. replacing your existing day telescopic sight, forward mounted to the objective lens of your day sight, or rear mounted to the eyepiece of your scope. Having a clip-on NV type sight increases its versatility, by allowing the shooter not to be saddled to one gun. You can change between air rifle, rimfire or centre fire rifles by simply attaching or detaching the NV kit as you wish; you therefore have a day sight, and then when it gets too dark, you fit the NV scope and voila- daytime again.

The Cobra company is synonymous with this type of NV sight and offer a wide range of units to suit all your hunting needs. They come in all shapes and sizes and being Generation Tube orientated, you can choose a level of detection or brightness, based on the money you spend or need. I had the Blade NV sight that is available in three models, Gen 2+ Russian £1999.95 or Gen 2+ Russian Enhanced £2549.95 or Gen 2+ Russian Enhanced Black and White £2769.95. I had the standard model that comes with Gen 2+ intensifier. This proves the truism of all NV equipment; the more money you throw at your optics, the better the end result!

The Blade is described as a CNVD sight, Clip on Nigh Vision Device, and although we tend to use these for weapons sights it can easily be used on monocular or spotting scopes for observational work. It is a small and quite compact design, dimensionally measuring 216 x 80 x 75mm with a weight of 730 grams, with the objective lens clamp fitted. It uses a waterproof body that is tested to IP67 spec; so, more than up for the sort of use your average NV user would encounter in the UK.

The Blade is designed to fit to the objective bell of your day sight via a clamping system. This has a metal mechanism that uses a Tommy bar type tightening device to close the split ring that goes over your scope’s housing. It works from 42mm to 56mm objective lenses, and to aid alignment and stop metal to metal rubbing, there are separate nylon bushes that slip into the clamp ring and cushion the mount.

It is essential to mount the unit correctly, so the full range of focus is utilised, so there is a secondary release clamp in the form of a large knurled wheel in front of the main one. When loosened, the main body can be moved forward or backward to gain the correct focal distance and it allows the clamp to remain on the sight and you can store the main body separately if you wish.

It’s a beautifully simple system, as your existing scope’s zero is unaltered. All you need in the Blade is a good generation intensifier tube and an 80mm F1.5 fast aperture lens. It is only 1x mag, so no alteration of your existing scope, but it should be noted that it is best with scopes that offer mags of between 5 or 8x magnification.

Power consists of your usual CR123A, coin-type battery that has a low consumption of energy and relatively long life for an NV device (50 hours); even though that is impressive, best practice indicates that I would always carry a spare, as they are hardly big and heavy.

To the left, when mounted, there is a small knurled switch marked with a white and red dot, one click turns the unit on and that’s it. You have the typical green intensifi er image but there is the black white image version on the Gen 2+Pro model if you so wish. Your existing day scope’s reticle is clearly visible, and if you have illumination, that’s works as well too. On top, is another knurled switch that focuses the Blade from 5m to infinity. The only other protuberance is the battery compartment below the ON/OFF switch.

The 80mm F1.5 lens if kept free of water or debris via a fl ip-up, plastic, cover that has a small aperture/filter in the centre to reduce the light when switched on, so you can zero in daylight. Remember, it’s not a digital sight that can be used safely day or night, Generation tubes have auto shut offs when it gets too bright, otherwise damage could occur. That’s it in terms of spec; nice and simple, just good light gathering and enhancement technology inside. I like this approach, as I find a lot of the NV optics can get a bit too involved in terms of menus and functions. I’m of the opinion that money is better spent in the area of optical quality, rather than Wi-Fi streaming etc.

I mounted it initially to my Sako Finnfi re (22LR) with a Hawke 4-12x 50mm Advantage scope, so the 59mm nylon bushing gave a concentric and snug fit on the objective bell. Yes, 730 grams does add weight to the front and with respect to how much it alters the donor’s scopes zero is largely up to the thickness of the objective housing and length of day sight.

On the Hawke, I had a shift of exactly 0.65” low and left. Take the Blade off and zero returns, put it back on and the same change. That’s the point, it’s consistent; so, when fitted, you just adjust your scope and all is well, no dramas. On the Kahles 6 -24x scope at 100 yards, there was less than 0.5” MOA difference, which is nothing in real terms, so all good in my book.

I had a call from a farmer who wanted some rabbits shot in a paddock, because they had been turning one corner of the field into something that resembled the Somme and the Donkeys were in danger of breaking a leg.

Thus, fitted to the Sako Finnfi re and using some Winchester Max 42-grain ammo and the Blade mounted securely to the Hawke Advantage scope I headed out. Scanning the fields and tracks on route with the Trail thermal, revealed surprisingly little in the way of game, except a nice Roe buck! Why is it always you see a buck when it is too dark and carrying the wrong calibre rifle! As I rounded the farm building boarding the said field, I switched on the Blade and the image turned from Thermal to that characteristic green hue of night vision.

This was the standard Gen 2+ model, but still the image was sharp, thus focused with the top centre wheel and the Hawkes reticle clearly visible. I scanned the field without the IR switched on, which came as an additional Laser Luch torch mounted to the right-side Weaver rail of the Blade. This is an additional item and cost. With a half moon and clear skies, the image was easily discerning rabbits out to 100 yds or so. With the IR on, you get the eyes shining back at you, so an indiscernible dark blob soon reveals itself as a rabbit and not donkey dung.

The fi rst rabbit was easily dispatched at 30 yards and the silent report, yet the loud sound of the head shot as the bullet struck made another one pop his head up from the nettles and that was two. As the evening progressed, I had six more, but in-between the shots and letting the area settle down again I was impressed at the range and image quality, the Pro version must be really good? Max range I guess for rabbits is 75 -100 yds anyway as the size of a head shot limits this. Normally, I stalk to 50 yards anyway to make sure, as if you are down wind and quiet, the dark hides you anyway.

Foxes obviously would be a greater range, but none presented themselves.

I like the Blade; it makes sense to me, as the ability to fit to any day sight gives you greater flexibility for differing rifle calibres than would a dedicated NV sight. There was a small zero change but consistent so no problems at all and image quality was very good and even better with an additional IR laser fitted if you like.