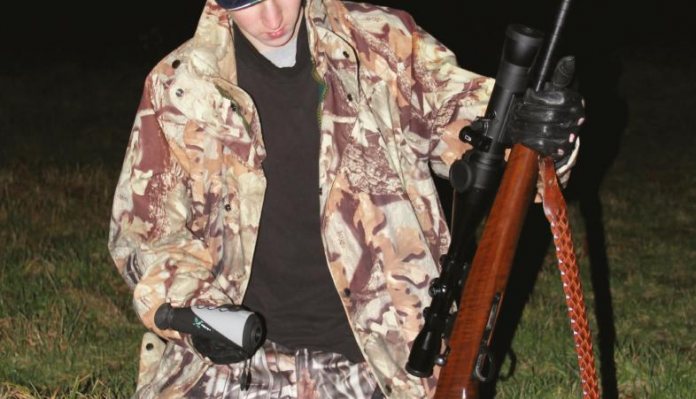 Thermal imaging devices and weapon sights are all the rage these days and have transformed the way we look at the world and how we go about our shooting duties. Able to work in daylight, as well as night time, doubles their usefulness, not only for game detection, but for all manner of other uses where a heat source is involved, water leaks, underground piping, security and poacher patrols etc.

RUAG Ammotec UK Ltd. have now become the distributor for DDOptics from Germany that I have to admit are a new name to me but have a large array of not only thermal but standard, tubed night vision in both sights and binoculars, along with regular optical rifle scopes and binoculars too. You might recall that we looked in brief at their whole range in the March 2019 issue of Shooting Sports.

I was sent a selection of night vision and thermal devices to test and the first one up, so to speak, was the Vox-FX model. This is a hand-held thermal observation device that is very compact and light weight that fits easily into a jacket pocket. It forms part of a range of thermal devices with camera and drone connectivity and varying range detection abilities.

First up, it’s very handy at 60x60x160mm overall dimensions and has a tapered shape that fills the hand comfortably with the eyepiece at the smaller end. To me, it looks very much like one of the FLIR series of thermal devices and I’d guess a bit of cherry picking went on when they were designing it? Its light too, at only 304g, so really is easy to hold in the hand for long periods of observations and then slip into a pocket when on the move. The good ergonomics extend to an all over shell of aluminium, covered with a very tactile, rubberised finish. This is two-tone in grey and black, although some models seem green. It’s both smart and tactile and looks very innocuous in the hand. Beneath the sight, set into a dimpled background, is the fixing plate for tripod attachment or shoulder brace. Handy for longer observations, where you may need to use both hands to record data.

At the rear, the eye piece, you have a large but fixed soft rubber eye cup to stop extraneous light entering the screen and causing glare. Focus is by means of a side-mounted, to the left, thumb wheel, which I have to say is a bit odd and feels a little flimsy. It has very obvious click settings to focus the observation screen within, with markings in white to the main body. It has a lot of slack or lag in the settings and has no ‘in-between’ focus settings at each audible click, so I found it a bit all or nothing, but then I am now of an age where reading glasses are necessary and a night time Horlicks beneficial.

Up front, on the objective lens housing, is a small flip down rubber lens cover that is all you need and helps protect against the elements. The objective lens is small at 18mm diameter but is capable of discerning a heat source out to 650 metres. You also have a 50 Hz refresh rate; so, as the device is moved in, the images remain sharp with no drag/slur effect at all, which is very good. The detector is 384x288 pixel, so gives a pretty good definition when coupled to the display screen of 720x540 pixels.

The controls are simple, which certainly helps those of a more uncomplicated nature. You have a series of five rubberised buttons on top of the main casing, with the second one back from the objective lens actually being a cover for the USB slot and that is in black to make it visible. The others are grey. At the front is the ON/OFF button, which, when held down for five seconds, initiates the start-up screen. I have to say it does take a while. The screen fires up with a hummingbird logo and then the graduated power bar at the base shows the set up progression, all in all, it takes about 15 seconds to calibrate. I think that’s too long and you could miss something in the time it takes to start up; so, I would leave the device on for as long as possible.

The second button is the USB port, as discussed, and the supplied mains adaptor or USB lead can be fitted to either charge the device or power it from a secondary source, like an external battery or USB power bank, which are common for mobile phones and similar devices. It also charges an integral, Lithium Ion battery; I was looking for the battery pack and how to get it out for ages! But it makes more sense being inbuilt, as there’s nothing to lose or get damaged.

The third button is for display or detection options, giving white hot, black hot, red or coloured gradient. The white hot is excellent for first detection, as a heat source shows up like a flash light, black hot gives a more defined image, red hot is white hot, but really hot areas showing up red and colour is a gradient of thermal hotness from blue (cold) to red hot!

The fourth button is the digital zoom of only 2x power from the optical 1.4x magnification. It’s actually fine and gives a good, useful boost to define a more distant object, or differentiate between two heat sources, image quality was actually quite good and not too pixelated at all. Also, if you hold this button down, it accesses the menu, where brightness of the display can be altered, calibration modes altered. I kept it as automatic and video out options via the USB port, which leads us to the last button, which is the record, so images can be captured for viewing later.

First up, it does seem to take an age to start up, so my advice is to keep it on for as long as possible and have an external power pack plus USB cable handy to top up, so no problems, just an observation. Also, the calibration really makes a clicking noise, which in the house is no problem, but out at night where noise travels and in a barn, looking for resting foxes it seemed very loud. Other than that, and the side focus issue, I really liked the Vox-FX, as its handy nature meant that I could stalk, walk or crawl, knowing it was safe in the pocket until needed, and not sticking out ready to be knocked. It was good in -5⁰ freezing temperatures and even almost horizontal rain, so no needs to worry about adverse weather conditions with this sight.

Set up and overlooking a grass field that extended to 600 yards and then hill side beyond, showed the DDOptics to be really clear, although the screen is quite small, but the 720x540 pixels gives a good defined image. I could see deer moving about a woodland edge, Roe-sized at 500 yards no problem, foxes at the same, but difficult to make out it’s a fox until they walked, but still good. Horses on the hill side at 900 yards still shone bright in white hot, so it could detect but may be not define, the limit is 650m and that’s still pretty good.

Black hot showed the best image quality and, in the barn, the colour gradient was good for checking out hot rats against hot piping, gotcha! I also used it to detect rabbits in hedgerows before they emerged, so I was in position to shoot before they knew it. Apart from the small display screen and awkward focus knob, I liked the sight. Handy to use, with only the buttons and functions you needed. It was slow to start up, but the actual image and detection range was impressive, a good start for DDOptics here in the UK.