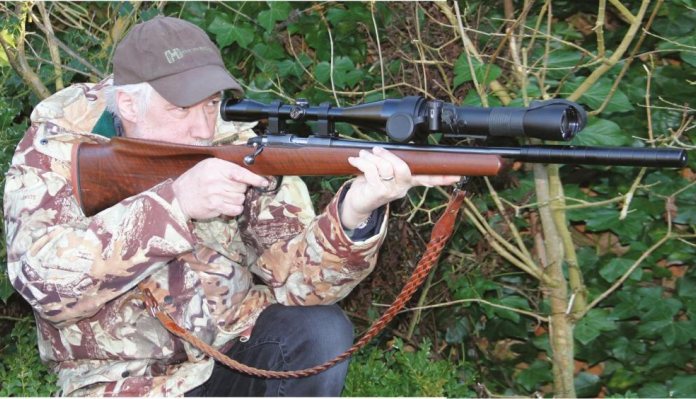 Meopta, from the Czech Republic, has been producing optics and scopes since 1933. With the rise and trend towards more night vison and thermal devices, they have introduced another string to their bow with the MeoNight sight. For a first attempt, they’ve really thought it through, as it can be used as a hand-held observation unit, or front-mounted to your day scope, thus offering a practical NV ability.

The MeoNight is a well-made unit, which comes with all the accessories such as carry bag, IR illuminator rail, hand strap, eyepiece cup, thread protector cap, remote control and optional sized objective lens clamps. Retailing for £4449, I was expecting good things, as their day scopes represent great value for money and good quality. Being able to shift from hand to scope-mounted is a real bonus and will have a broad appeal, also it comes with a ten year warranty.

The Meopta is quite compact and light, which it needs to be, especially if it’s going to hang off the front of a rifle scope. It measures 207x55x83mm and weighs 638g, so sturdy and compact and built then to resist a few knocks too. Rated to stand 3500 joules of recoil energy and operational to -25 to + 55º, the internals are all nitrogen-purged to stop fogging. Plus, it’s waterproof to 1m for 2 hours, so good enough for any hunting trip. The casing is light alloy with the operating buttons all rubberised and waterproof. The carry case is handy and the strap that ties to the wrist and then Velcro’s around the sight is a great security measure, to avoid dropping it.

The two rubber lens caps attach to the main body, so no chance of losing them in use. The front has a small aperture, so the device can be used in daylight without harm and is handy to check zero after mounting.

Controls are housed to the left-hand side and have a large rubberised button to switch the unit ON/OFF; one click for ½ a sec to turn ON and on two clicks OFF. If you do not touch it within an hour of it being switched on, it will auto shut off to save power. Also, if you hold it down, the brightness is increased/decreased in a cycle.

Behind this is a large focus wheel to gain a clear image with a bracket below and cover that can be removed for a tripod or an accessory rail in front of the rifle scope. Above, are two Allen screws that can be replaced with a small, one-piece Weaver rail to add an additional IR illuminator of your choice.

To the right of the main body is the battery compartment and remote control output/ input plug. A single CR123 battery is used, which can last up to 7 hours, dependent on ambient temperature. For observation, you can attach a rubber eyepiece to keep your eye positioned correctly for the field of view and keep the debris off the lens too. You can also attach an optional 3x booster lens to the back, to increase magnification.

Fitting to your scope could not be easier. A series of adaptors screw into the MeoNight’s rear lens housing that allow you to clamp it on to the scope. They are available in 49.5, 57 and 62mm diameters to fit a whole range of popular scope’s objective diameters. I used the 62mm, which fitted my 56mm front end. Screw the clamp unit to the back of the MeoNight and then offer it up to the objective bell housing, then slowly close the clamping lever to produce a firm but not crushing fit, you can adjust to suit.

Because this is an NV add-on positioned at the front of the normal day scope, the parallax is un-altered and the reticle will remain clear with the zero unchanged. I have tested many a front-mounted system over the years and, dependent on its weight, it can shift the zero slightly, but usually consistently; so, a small zero adjustment is all that is needed.

As I said, I had the 62mm diameter clamp for 56mm objectives, but the Nightforce on my 6mm PPC rifle was too large; so, I fitted it to a Kahles 6-24x56mm Ki scope, which was fine. I’d recommend you take measurements before you purchase a clamp, to get the right one. The rifle’s zero shifted ¼” low left, so nothing to worry about; that’s a Kahles scope for you! In fact, once fitted and to be honest, you hardly notice it on the rifle and, so long as you do not have a big moderator, it all fitted balances quite well.

One press switches it on and it’s quick, so straight into observation. You have that characteristic green tinged screen from the Gen2+ intensifier tube and then you need to get the image and reticle both in sharp focus with the sidewheel. The lens has a special MeoLux anti-reflective layer coating, which helps to gain the maximum light transmission, especially at dawn or dusk. You also have the MeoDrop surface finish that stops water or moisture droplets from forming or clumping, so they run off the lens’ exterior surfaces for a clearer view.

You also have a flat and clear field of view, with image quality and clarity right to the edge, which is where Meopta’s rifle scope manufacture really helps. Performance is the crucial part of any night sight and is largely determined by the conditions you are operating in at the time. Any intensifier tube type sight needs some ambient light to amplify and gain the image, otherwise you need the addition of an IR illuminator to boost the clarity what you hope to see.

I tested the MeoNight under a blood wolf moon night (half cloud and overcast) to see how that affected performance. In full moon, the image was well-defined edge to edge with just a hint of photon fizz (noise) in the image. This is also largely due to the magnification used on the donor day scope, as the Kahles’ minimum was 6x power. I could get up to about 15x mag before the image started to degrade, which was amazing!

Using it hand-held at 1.1x mag it was like green daylight and very impressive. You could clearly see cattle and sheep in the fields at 600- 800 yards. Scope-mounted, you can half that for clarity, but for an accurate shot, 200-250 yards wouldn’t be a problem, as you can see beyond that for a safe backdrop.

Rifle-mounted on a half cloud/moon night, the reduced light gave less definition to the image but very little noise either. As the NV image has to go through more lenses on the scope to reach the eye, it was naturally darker, but I could still connect with a 200 yard steel fox silhouette. Here, I would probably fit an additional IR illuminator, as it would instantly improve performance. Hand-held, again really good clarity and definition and not a lot more noise.

Finally, with heavy cloud cover and little available ambient light, the MeoNight hand-held was still remarkably good! Yes, more photons were hitting the screen as white specks, but that`s to be expected from any Gen 2+ tube. But it was still clear, and you could easily make out the odd fox out to 200 yards. Fitted to the rifle without IR illumination at 6x to 10x mag, you were a bit limited to range, but you could still quarter a fox. Fitted to a lower power 2.5 or 4x mag scope, you get a boost in clarity and brightness again. So, in reality, you need to know the limitations of your scope’s magnification range for best image, and as with all other Gen2+ NV an IR illuminator will help. Hand-held for observation only, the MeoNight gives really defined clear and bright images on all but the cloudiest/darkest nights.

The ability to go hand-held or scopemounted makes the MeoNight very appealing, as it and the mounting system is well engineered and easy to fit and I found minimal zero shift. Performance was very good, it’s unusual to still have a clear image when the magnification increases past 10x. Build quality and, for someone who does not want a dedicated night sight permanently fitted to their rifle, the MeoNight would be just the ticket.