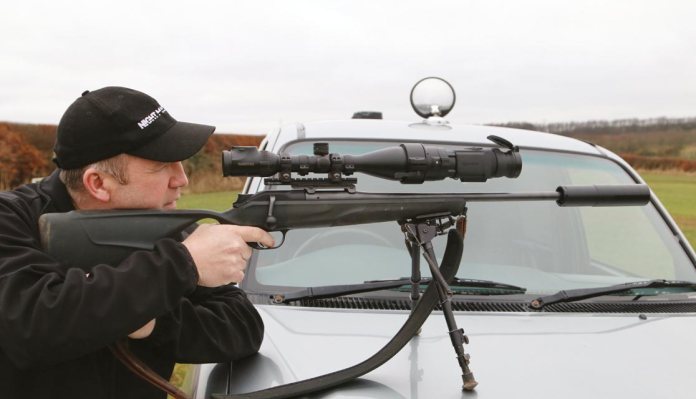 After much anticipation of the long awaited Pulsar Core, it finally landed at my door, supplied by the Pulsar distributor Thomas Jacks through Night Master. It came just in the nick of time, as we were right in the heat of the lambing season. So this gave me the ideal opportunity, as the first fox controller in the UK to test and write a user review on this new front-of-scope thermal add-on.

First things first, I opened the sufficiently packed and padded box from the courier company, which revealed the usual blue and black box from Pulsar. I’ve been using the Pulsar Apex XD75 thermal weapon sight for a while now, so knew I was in for a treat with this latest thermal imaging product. Opening up the box revealed the Core unit, which was very compact and lightweight. Also in the box were the instruction manual, the remote control and the eyepiece, which converts the add-on into a handheld thermal spotter.

Flicking through the instructions I could see that the menu system was very similar to other Pulsar products that I have tested, such as the Apex 75 and the LRF N870 Digisight. I powered-up the unit with the two recommended non-rechargeable CR123A batteries and attached the eyepiece, which was very straightforward. Next was to focus the eyepiece, so that the icons on the screen were in sharp focus and familiarise myself with the menu; such as the contrast, brightness and zoom. Pressing and holding the mode button brings up the on-screen menu, allowing you to scroll through the options.

At the front of the unit, around the lens housing, there is a lug (same as on the Apex XD75), which can be pushed from one side to the other to adjust focus. After setting the focus, brightness and contrast, I felt that even with the lowest setting the screen was brighter than expected, but I would soon put it to test later in the day. It was time to fit the universal adaptor to my scope, but straight away I saw a problem, which I feel Pulsar need to address, as the adaptor does not slip between the scope and the barrel when running low or even medium-height mounts. This issue may upset the set-up on some people’s rifles and take away from the desired option of keeping the scope as close to the barrel as possible for the best point-of-aim.

TIER-ONE TO THE RESCUE

Luckily for me, a quick phone call to rail and mount specialists Tier-One, and I had a set of medium scope rings delivered the next day. I used these instead of the high ones because I already have the Tier-One Picatinny/ Weaver style rail fitted to my rifle, which gives me some additional height before attaching the scope rings. Whilst waiting on the rings being delivered it gave me a chance to go out and try the unit as a spotter and familiarise myself with its functions!

As a thermal spotter, the Core unit was excellent; very effective in daylight (for deer stalking) and night time (for foxing). It’s also compact enough to fit in your pocket. A constant runtime test on the unit revealed approximately four hours of effective use available, which wasn’t bad! But I do feel an external battery/ charging port could be added, to give you the option for a longer duration. An on-screen battery symbol flashes when the power gets too low, then it’s time to change them, as they only last a few minutes when that happens. This job only takes 30 seconds.

The universal mount for holding the unit on the front of the scope comes in a couple of different sizes, so you’ll need to quote the diameter of the objective on your scope when ordering. Several different shims are included in the mounting kit, to make it fit almost any size of scope. I was using a Swarovski Z6i 2.5-15 with a 56mm objective. With the correct shim selected, I fitted the mount to the scope, then took off the eyepiece and replaced it with the bayonet adaptor, then attached the adaptor bracket to be fitted to the scope.

Once the Core was fitted on to the objective, I carried out a simple field test at a target and found there was no need to zero-in the Core because it does not change the point-of-aim from what you see through your scope. Neither does it seem to affect your zero in any way, which means it can be taken off and put back on with no worries at all. I also tried the Core on my Schmitt & Bender 8x56 fixed magnification, but when I got to 6x magnification, the image quality started to deteriorate. When using the Core on the scope to read the menu you need to be using a low magnification - any more than that and it pushes the menu out of your field-of-view and you can’t see it. The unit works best at around 4x magnification.

During the first night out waiting for a fox, I removed the Core and scope combination (made possible with the Blaser quick-release mount) and used the combo as a telescope. It worked pretty well because I saw the fox at 180 yds away, which gave me time to click it back into place, get into position and shoot it at 80 yds. That was the first success story for the Core and it all worked perfectly, with a beautifully clear green screen that picks-out the heat source with no problems at all.

The second outing came about through a phone call from one of the local farms where I control the foxes year round – putting in more hours at lambing time. One of the sheep had died during the night and by morning it had been eaten by something, which to the best of my knowledge would either have been foxes or badgers. Across in the next field, about 200 yds away from the sheep carcass, was a high mound, which gave me a great vantage point to look in every direction and also shoot from, so I could hopefully catch sight of whatever was feeding off the carcass.

I got myself settled for what could possibly be a long night, set-up the Core as a spotter and started scanning the area for the culprit in question. It was just before 7pm and still light, and I must say the Core spotter was looking particularly clear. With the green screen it is like you are looking through a very good quality night vision device, until you pick-up a heat source, then the bright white heat signature soon reminds you that it is indeed thermal imaging. The first thing the spotter picked-up was a hare out at 150 yds. Even at that distance I could tell exactly what it was. While waiting on dark coming in, I had a bit of time to play around with the brightness/ contrast and also the 2x zoom function. But even after playing with the brightness I felt it needed to come down a couple of notches, as it was too bright on the eye. Apart from that, the display and zoom were really good.

At about 8.30pm a fox made an appearance out at about 300 yds, so it was time to unclip the eyepiece and connect the Core onto the bayonet fitting on the front of the scope and get on to the fox. It made its way down a hedge line then along a wall and up into the field. Without hesitation it went straight to the carcass and started feeding. Then, the moment it presented the correct position, a shot was taken and down she went. I decided to leave the vixen lying where she dropped before picking-up, as the farmer had said earlier in the day that he had seen two foxes in the field where the carcass was laying.

The wait definitely paid off, as 15 minutes later, when I was watching over the carcass through the scope, the next fox came in to have a feed. Seconds later it was laying pretty much next to where the first one was shot, giving me both a vixen and a dog within a couple of hours. With two foxes down it was time to retrieve my quarry then drop them off to the farmer for disposal. All in all a good night’s shooting and another great piece of kit from Pulsar. Price-wise the Core is just shy of £3,400, whereas the Pulsar Apex XD75 is £3799.95.