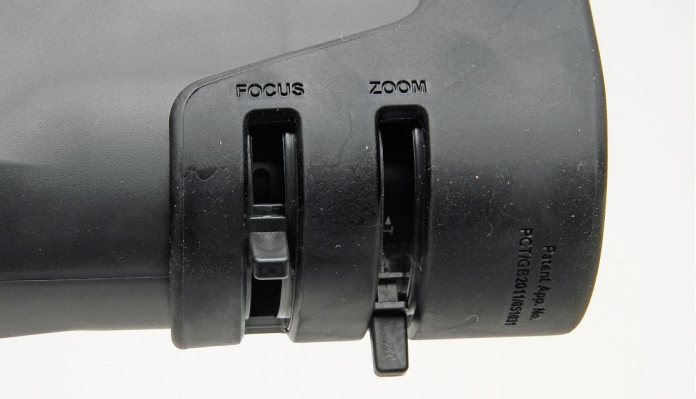 Nite Site famed for their innovative, TV, screen heads up night vision (NV) sights that attach to your day rifle sight now have improved their new Night Vision Spotter that can view an object out to 400 meters in total darkness.

The Nite Site Spotter is a hand held NV observation tool, not a weapons sight and as such will give a super clear image in total darkness to define your target and then shoot with your NV rifle set up. Alternatively it can just be used by land owners or security for covert observation of property at night with an AV video out socket so you can record what you observe.

The Spotter is a substantial unit with a single grip handle that houses the AV out, tripod and external battery plug in. The main body has the IR illumination with a camera below it. This configuration allows the user to point the IR illumination at the target for viewing up to 400 metres and then the camera records the image and this is then viewed on the integral, 3.5” TV screen.

The Spotter is unique in that it has a 16x power zoom facility which is optical not digital and this gives it an incredible reach out into the darkness to distinguish an object. It is all powered by an onboard Lithium battery and the unit benefits from the ability to manual focus the image at any range.

Yes it’s large, 12” long, 10” deep and 4.25” wide and weighs in at a hefty 2lbs and 14ozs and looks like a traffic speeding camera. It does feel a bit top heavy but the controls are laid out well and easy to use, even in the dark. You can also mount it on a tripod by a universal thread adaptor in the base of the handle and above this is the external battery supply socket, if you want it and above this the video output of 3.5mm 4 pin variety for recording to an optional recorder. On top of the handle is the 3.5” LCD screen with the main charging socket just above the Nite Site logo. Here you plug in the battery charger to fully charge the 3500mAh 11.1v battery.

The two main operating controls are below the screen and these are a revised IR intensity knob that allows an infinite IR illumination intensity to give a clear image and an off position. The other is the power mode for ON/OFF with a day or night options so you can even use the 16 x zoom for day use observation which actually works rather well!
The camera controls comprise of zoom and focus levers that protrude below the main housing under the camera. The camera is a 1/3 CMOS chip-type with IR technology and a PAL 4:3 ratio. The IR LED lens is protected by a front screen recessed from the main model, do not look directly into this when illuminated as it is 850nm wavelength.

The Spotter is large and there`s no denying that and after 20 minutes you do feel the weight and a two handed approach is beneficial. After dark switch on the Spotter to night mode with the main switch and instantly an image comes onto the screen on the main panel. Now you have to focus the image via the small lever under the camera and then the zoom. Alternatively zoom in and then focus.

Now you can turn on the IR beam if necessary, the older model only had three settings and no OFF switch. This the latest version is far superior with an off mode and then infinitely variable IR illumination as you turn the knob clockwise. By varying the beam you can avoid the ‘white out’ with too much illumination especially at close range and now you can vary the IR illumination to match the conditions and zoom magnification used.

You also have to aim the Nite Site Spotter slightly downward towards the object ahead as the camera is sited slightly upward facing in the viewer, otherwise all you get is sky. Performance too is greatly improved and was really good even in total darkness. You need some external light i.e. moonlight or stars to see without the IR beam but when the IR is turned on at the lowest setting you can define a rabbit out to 150 yds and a fox to 200 yds or so and this increases to 250 yds for the rabbit on full power and a fox just to 300-350yds, helped by the reflective IR beam from the quarries eyes. Max range is about 400 meters.

The 16x zoom facility is really very good for defining the target and concentrating your gaze into the centre of the image with just the right amount of IR illuminator. Obviously at maximum magnification you need to keep the Spotter steady to avoid wobble. But the variable IR illuminator now really gives a very clear image even at full mag. I zoomed in at various ranges and was very impressed at the clarity of the TV image and range of detection it seemed far better then the older model.

One other thing that all users should be aware of is the screen, at night it will light up your face as quite a bit of illumination is given off so take care with that. Nite Site does have a selection of filters that can be placed over it to reduce glare. Also as you are viewing it destroys your natural night vision when you come to look through your rifle sight to take a shot, so maybe view with one eye?

For the price, you get an impressive NV reconnaissance viewer that gives a very clear image even out at extreme range now, and that zoom is really very handy. The new variable IR intensity is far far better and now you can really get the best out of the Spotter. It is still heavy and you need a two handed hold really and I still think a carry strap would be nice as standard and would not cost too much.

The screen lightning up your face could be an issue but negated by filters or may be a sliding filter from the housing on a future model? Despite a few niggles the Spotter is a well made affordable NV viewer with and impressive performance which will be both at home for hunters and non hunters alike.