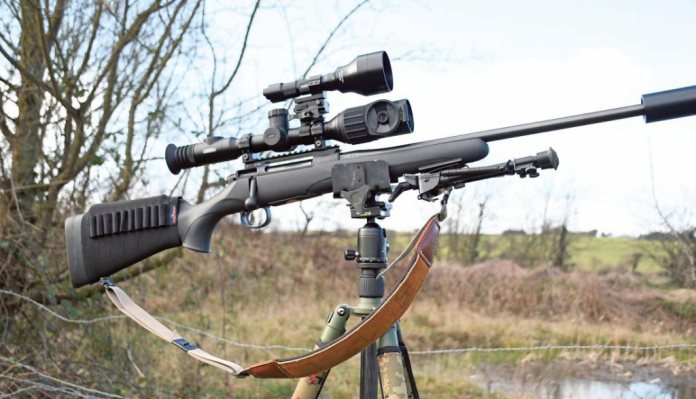 The new Pulsar Digex N450/455 digital night vision riflescope features a state-of-the-art 1280x720 CMOS HD sensor providing high-performance night vision, taking full advantage of three adjustable IR power levels for your preferred effective range and illumination level. Just to note, I’m using a 455, but the only difference is the supplied illuminator frequency between that and the 450, the base unit is identical.

The Digex offers a fast focus eyepiece to clarify the on-screen image and shows an improved eye box for when head/eye position is not totally perfect, improvements on the older pinpoint sized focal patch to stick with. Three APS 2 batteries are supplied along with charger and these power the Digex itself, one in the illuminator and a spare. The upper `elevation` turret has a bayonet quick release cap for fast swap over and the on-board power cell (carrying 3200mAh capacity) versus the 2000mAh of the APS 2 is great because, when fully charged using the Micro USB cable, I had no problem with over five-hours continuous run time. The added bonus is that if you changeover APS2 battery, the unit will remain powered-up on the internal cell, so never missing a moment’s action. Both batteries accurately display their remaining charge in the lower right corner of the screen.

The right-side cap carries the Micro USB socket for charging and download of video and stills, the former with sound recording capability if you need to showcase your activities. Bluetooth connects to the Stream vision app used across the Pulsar ranges and this now has a ballistic calculator incorporated. I suspect the next stage in Pulsar’s evolution will be to incorporate more on the App’s functionality to calculate and self-program/assign the longer-range zeros for the scope, but that isn’t in place yet.

The Digex can be zeroed on five rifles, each carrying personalised settings for any of the 10 programmable zero ranges for more precise longer shots with 10 reticle and colour options.

The left-side control dial has a short press centre button to initiate more immediate features like contrast, brightness, current range in use and Stadiametric rangefinder on the primary menu before a longer hold enters the full menu. This structure holds all controls for reticle choices, screen brightness, reticle colours, and most importantly the zeroing system. A moving reticle system is used so after the first shot, move the reticle towards to point of impact on target. Be patient and relaxed because although taking some time and effort, it is very precise.

The base level `click` value is 10mm @100-metres using 4x magnification. If you increase to 8x magnification, each click becomes 5mm with 16x magnification further refining this to 2.5mm at 100-metres. I find this simpler to understand, regardless of magnification level, when displayed as +/- cartesian coordinates (top right of the screen) up/down/left and right of the Digex’ s centreline so if you record values like X=5.25, Y=-7.50, you won’t go far wrong in understanding. Imagine one additional click at 16x would add 0.25 to this, 3 clicks at 4x magnification would add 3.0 and it makes it much easier to picture. Don’t get too hung up on the magnification, concentrate on the coordinates as these do not confuse, even if the adjustment unit is changing.

Picture-in-Picture mode is an additional frame for highprecision zeroing, taking only 10% field of view in the upper display area, showing magnified image of the target and reticle allowing the user to closely see the image in the aiming area whilst retaining the entire field of view. I’d really suggest every effort without compromise because there is a lot of other action to go on when shooting in the dark with focus, ranges, illuminators and the hunting itself so the last thing you want to do is have any doubts on your zero. If the coordinates are written down, you won’t get lost should you ever make a critical error when manipulating the detailed, but intricately delicate control menus.

Freeze frame for zero is helpful in some situations and take some binoculars with you, it’s not always possible to resolve your bullet holes on the target, the lovely immediate firm, tactile `click` on a day scope is miles away from the electronic menus of night vision.

Image focus is performed with a rubberised collar around the objective lens and gets you in the groove for range, but I can’t say I was massively impressed by the sharpness beyond about 150-metres, regardless of whatever settings I used. It’s a reach and doesn’t offer fingertip control. It’s grippy though and doubly reassuring because Digex is IPX7 rated for waterproof and will survive 30-minute water submersion to a metre.

Full day capability is suggested, but like all NV it requires set-up and due to lack of image colour contrast, I don’t think I would be using one in daylight to hunt exclusively.

Those factors aside, the great step forward by Pulsar, just like they did with the Thermion 12 months ago, is to package the functionality of their “Digisight” into this 30mm tube that allows easier compatibility with a wider range of rifles which have been designed around Non- Picatinny rail mounting systems. You get a lower profile to the gun, more compact handling and better cheek position on the stock. A detection range of 450-5550-metres is listed on the N450 with the N455 dropping to 500 because of the 940nm IR. I used 850nm external IR during all my testing as I need the extra throw but was impressed by the sensitivity in moonlight and from general background light from semi-urban light pollution.

It took me a little time to unlearn what I had used before because sensor sensitivity on the Digex is significantly better. I was getting too much reflection and white out regardless of using the full opened lens cap or the smaller 10mm aperture, as well as a grainy image. I changed from an LED to VCSEL Laser illuminator, the PBiR-L and this improved matters immediately.

The image quality and beam spot were more uniform with a less grainy picture, yet even on its lowest power the Digex showed its superb image sensitivity. Don’t get me wrong, there is no problem here, but the correct illuminator is the key, and my feeling is I like the beam type of the VCSEL, but want it a little less powerful so I can drop even more when needed at closer ranges.

I tended to keep the spot placed with just it’s lower third on 200-metre coincidence point to minimise the closerange reflections. Core fact is the Digex is good and I had no issues tracking beyond 400-metres and taking shots beyond 300 on foxes with 200+ metres on smaller, more sedentary quarry also certainly engaged. I can’t say I think the image is any sharper, but certainly needs less IR to grasp it. The more IR units I try, the more I accept they couple with the digital NV beneath them like a married couple, some seemingly appropriate matches just don’t seem to work so don’t be afraid to borrow additional illuminators and try them on your ground.

Easy on the eye

Eye relief of 50mm and recoil resistance to larger calibres (9.3x64-375 H&H suggested maximum) is somewhat of a contrast as mounted on a 223 or 243 for foxing, physical recoil is limited but the 243, even held firmly into your shoulder, does give a little nudge to my eyebrow from some positions. It’s important to state that although you can withdraw slightly from the ocular body and still see a circular picture with reticle in the centre, the outer periphery of the internal display is now restricted within the vignettes of the image, so bear that in mind when it comes to shooting zero, versus real world hunting from multiple positions.

In the end I never had any issues in use and secondly, the buttons on the upper eyepiece make shooting lefthanded easier with similarly fast access to primary controls. There is a magnetic rubber concertina eyepiece which helps shroud unwanted light sources after dark, but I prefer these off as, although ventilated, condensation can form on the ocular lens from the heat of your own skin. Enhanced Night- Time Sensitivity is enabled using the rearmost power button with a short press to initiate “Sumlight” function but with added IR, this rarely needed and somewhat `overwhelmed` the sensor with whiteout. If not using added IR, this is a great additional factor for when you hunt quarry that is twitchy around IR illuminators so just beware not to initiate it accidentally, or at least recognise you have done so.

I’m looking forward to receiving the 850nm illuminator (N450) from Pulsar because the 940nm supplied (N455) was capable to 100-metres on rabbits without issue and very well matched in power to the Digex itself, I just want the 850nm to experiment more with distant beam throw on what is clearly a very sensitive system.

New reticles offer the equivalent of First Focal Plane performance in a day scope, so they scale with the image as zoom increases to allow known associated aim off or distance judgement more easily, and I liked this factor.

I mostly used the scope at 4 and 8x magnification, because it didn’t seem helpful for me to go higher on my terrain, that’s not to say it won’t for you. As well as power and video on/off, the third button atop the eyepiece enables quick presses to cycle through the magnifications 4-8-16x steps more intuitively than accessing the left side menu dial which will scroll in 0.1x increments all the way up if desired.

I certainly enjoyed the broad field of view enabled with fat mag change capability and reminiscing about the scope, I’m reminded of how easy it was to use once set up. I just need to tune my illuminator setup a little more and for once, have a scope I’m really happy shooting and excited to experiment more thoroughly with.

Thank you to Scott Country for supplying the scope for testing: scottcountry.co.uk.